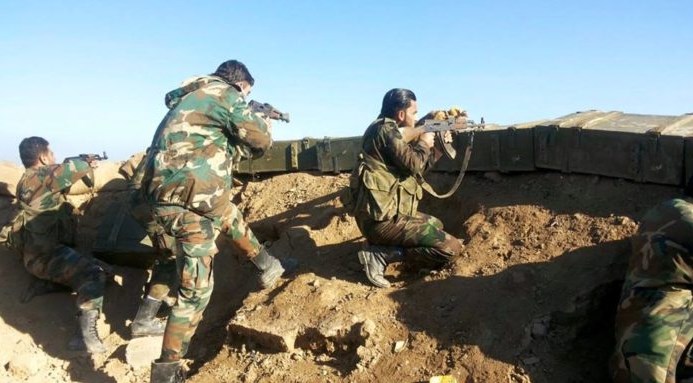 The Syrian Arab Army (SAA) launched a limited operation in Deir Ezzor, setting contol over the Hilal hill, teh Dashem hill, and the Milad hill located between the government-held neighborhoods and the Deir Ezzor Military Airbase.

This operation aims to reconnect Deir Ezzor’s Military Airbase and its surroundings with the SAA’s points inside the city.

Pro-goverment sources declared that the SAA had managed to destroy a tank and 6 vehicles with machine guns belonging to ISIS. All terrorists inside the vehicles were also killed. The incident took place inside in the area around Makaber, the Block factory and the water station.

ISIS’s Amaq Agency claimed that ISIS snipers inside Deir Ezzor city were able to hit two Syrian soldiers in one of the embattled city’s districts.

Russian warplanes also bombed a command center belonging to the terror group in the Moratt village in Deir Ezzor’s countryside.

The Syrian Army has to capture less than one km to reconnect the airbase with with the government-held part of the city. If government forces keep the momentum, the SAA will likely accomplish this task in the next few days.

Deir Azzor may be free of ISIS fairly soon now that the US has troops blocking the river highway north of town.

But if the US take Deir-ez-Zor, they won’t give it back to Syria.

Good guys and soldiers there in Deir Ez Zor. And a good leader fighting together with his son.