On February 7, the Syrian Arab Army (SAA) and its allies reached the outskirt of the town of al-Eis in the southwestern Aleppo countryside. The town and its hilltop are the main target of the ongoing military operation in the region.

Army units reached al-Eis after capturing the nearby towns of Zaytan and Birnah from al-Qaeda-affiliated Hay’at Tahrir al-Sham (HTS) and its Turkish-backed allies.

According to the Syrian Arab News Agency (SANA), army units are now “chasing” the militants fleeing to al-Eis and its hilltop.

A day earlier, the SAA and its allies, including Lebanon’s Hezbollah, resumed their advance in southwest Aleppo. The forces captured the towns of Khalasah and Qal’ajiyah.

Al-Eis’ hilltop, which rises 365m above sea level, overlooks the remaining militants’ positions in southwest Aleppo as well as a long strip of the M5 highway. Once the hilltop is captured by the army, militants’ defenses will collapse.

Viagra won’t work on the jihadis. The Captagon pills will counteract it.

Pretty sure amphetamines act as an aphrodisiac.

Not on these jihadi animals. They aren’t human.

There is nothing funny about animal rape and murder. Meat is torture and murder, go vegan.

Its true then that some Vegans have no sense of humour.

I have the greatest respect for animals and am not keen on meat, although I do eat chicken.

The comment Wolfgang made was black humor and not promoting animal sex with humans.

What a day even Erdogan will be catch by white helmets while raping gaots and sheep.

Would they need viagra. I am pretty sure just the sounds of bleating will be more than enough . A bit like when you hear the sound of high heels walking. Already the interest is aroused.

I hope they capture the hill soon. This will be a perfect artillery direction and target observation spot!

hezbollah flag on top of Al Eis soon to revenge their fallen comrades, durin 2016, their fighters fought till death when bein sieged after allies lacked comms for tactical retreat got hezbollah surrounded.

Any Hezbollah flag on the hill top should be supported by modern Iranian air defences for obvious reasons.

Syria should prevent any resupply Turkey’s post and force Erdogan to abandon the posts. Those Turkey post are threat to SAA and could backfile, as Turkey could prepare offence against SAA. It’s very obvious Turkey in not about peace rather conquer Syria. Russia should provide modern S-400 and Su-30, MIG 30 and more anything weapons and attack helicopter in order for Syria fight back Turkey. SDF also should join SAA to fight Turkey in other fronts. Turkey will use those post during offensive attack SAA.

Three-quarters of a million moderate rebels coming to visit you, Turkey. Good luck with that wall. And before you pull the trigger on your machine gun to start mowing down refugees rushing the wire, remember that there’s plenty of well-armed jihadis in the crowds today. Jihadis you armed with RPGs, TOWs and sniper rifles. The 10 cm of concrete protecting your machine gun nest? Just consider it pre-placed shrapnel. It’s not even going to slow down when it flies through your skull. 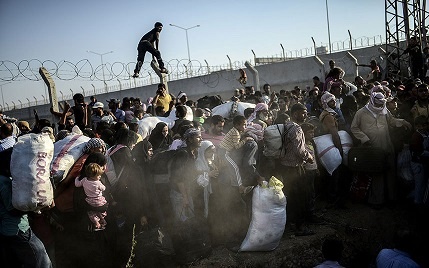 Such a hilltop should be a perfect target for Syrian and Russian air force….

Shouldn’t matter. Woofers called it – head-choppers will abandon everything east of the M5. Fighting for anything, including Al Eis, is useless. 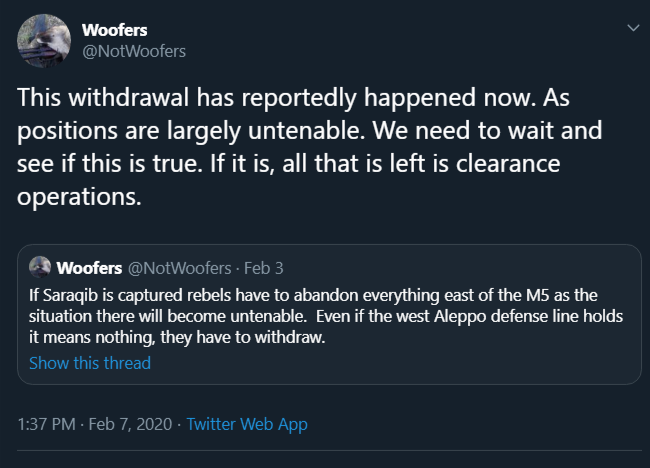 I was wondering when the Russian TOS thermobarics would come into play again. The hill top is a ideal target.

Yes but I wondering too where that weapon are, seems they rarely use by SAA now

once the hill is seized, a major operation will commence to seize the villages of AZ ZARBAH, BARQUM, QAMMARI and the M5 highway north of ICARDA area ….

4,000 troops assembled, 50 + tanks ready to go, likely next 24 hours when weather clears for the close air support that will be needed.

Wikipedia says that the city of Idlib had a population in 2010 of 165,000. Does anyone about how many it is today? Less or more?

I think it will be surrounded, isolated and cut off from everything, water, electricity, food .. . eventually it will be leveled like Grozny was.

IF civilians are still there ‘ levelling like Grozny was’ would be foolish, ant the Russian leadership is certainly not foolish.

Levelling the nests of terrorist vipers hiding under civilians beds in Idlib would give the US a chance to wade into the conflict openly as they scream of the ‘Right to Protect’.

Unlike Mosul and Raqqa of course, that the US, ermmm, levelled like Grozny.

noncombatants will be given multiple opportunities to leave, after a certain date anyone still inside, will be considered a terrorists and be dealt with accordingly …

Have you considered the Human Shields that the US backed terror gangs have been proven to use, Tim?

Many of them have been bombed by Russia though, according to the US State Dept and British Foreign Office IF what they say is credible, and not just Black anti Russian fake propaganda :)

Can I, as a Whitey, use the word ‘Black’ as a metaphor these days?
Or is that ‘appropriating’ their culture :)

Rumors of 5 additional villages under SAA control east of SARAQIB … waiting to hear on confirmation.

TIGER Forces just back from 2 week leave will be spearheading the push to M5 ( ICARDA ) operation .. new tanks, new gear

All US weapons are Democratic Weapons, even when being used by vile headchoppers or the US Military.

ok .. the 3 villages in the circles are definitely under SAA control .. The rats put up their rat flags , but pulled out overnight … SAA patrols went it to discover them empty but booby trapped … dismantling ops going on now .. no losses to the SAA

waiting to hear on the other 2 …

“Once the hilltop is captured by the army, militants’ defenses will collapse.”

this already happend 2 years ago, but somehow SAA lost this hill again.

At these guys is never sure, that on day after tomorrow will keep the gain. :(

9 villages now under SAA control now … rats running for their lives, even trying to leave with the electrical grid on the way out

” army units are now “chasing” the militants fleeing to al-Eis “ 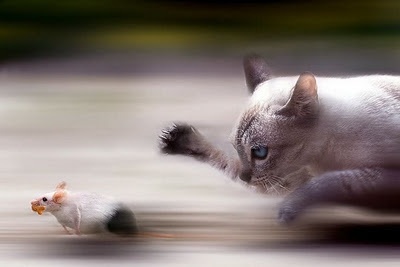 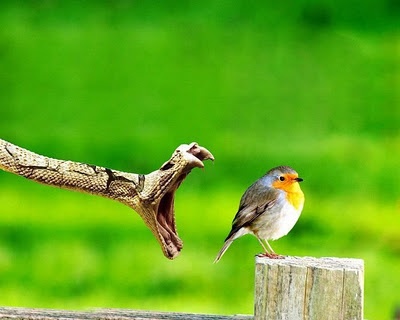