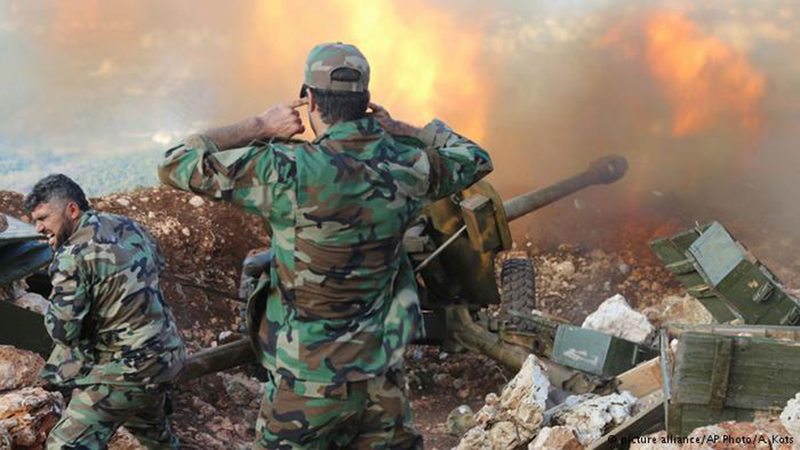 According to the UK-based Syrian Observatory for Human Rights, the shelling targeted the Turkman Mount. A number of foreign jihadi groups like the Turkistan Islamic Party and Ajnad al-Kavkaz are known to be stationed there.

“There is no information about any human losses [as a result of the shelling],” the monitoring group’s report reads.

The shelling was likely a response to recent attacks by the militants. A day earlier, a Syrian service member was killed by a sniper in the southern part of Greater Idlib.

A ceasefire was implemented in Greater Idlib in March in the framework of the agreement brokered by Russia and Turkey.

The agreement has been facing several challenges, including the militants’ refusal to allow the reopening of the M4 highway. The strategic highway links the port city of Lattakia with Aleppo city, the industrial hub of the country.

MORE ON THIS TOPIS:

You don’t look Turkish at all

you know what Bize her yer Trabzon i from ;)

Been blessing last 10 years nothing happening

Well… they still exist as a nation and had regain most of their country so far. I mean that has to be a blessing, back in 2013/2014 we would never think that Syria will survive the disintegration created by the U.S/Israel and Turkish extremists and mercenaries, it would had ended like a huge ISIS headquarters and more refuges would had been pushed to the EU.

Don’t forget that the help of Russia it also benefited the whole EU from a lot terrorists in sheeple cloth going to Europe, to me what Syria has is for sure a blessing, yet… they still had to fight to maintain that blessing in effect, bad people don’t sleep, so good people should neither to maintain peace.

To maintain freedom and peace you need to stay vigilant.

https://www.almasdarnews.com/article/gaddafis-cousin-warns-erdogan-we-are-able-to-reach-istanbul/ haha he is right

But they can’t hit the target so. Assad must go now

Russia’s favourite terrorists, Uighurs and Chechens, and both groups belong to HTS, but only because they can’t join the legal Turkish factions, they’re designated terrorists so they have no choice but to join up with HTS. The Turks aren’t allowed to support them according to international law but they would if they could, Ottomans always stick together when they can, they just do it secretly. But I suspect HTS knows the truth, they know they have Turkmen traitors in their ranks, they also know that when the time is right the Uighurs and Chechens will turn on their HTS allies whenever the Turks ask them to, and I’m sure they’re preparing a surprise of their own when they do, and they will eventually.

Most the Russian special forces fighting in Syria are ethnic Chechen. They did a pretty good job.

I didn’t know that any of the Russian special forces were Chechen, that’s news to me, are you sure, I find it very hard to believe considering past history. There may be some Chechen militias working for the Russians but after 2 recent wars I doubt the Russians would recruit Chechens to their most trusted elite units.

Im sure, 100%. Those wars arent that recent. Second Chechen war ended almost 20years ago. Russia won and Chechnia is now part of the Russian Federation. Moscow poured $billions into Chechnia, Grozny was rebuilt from scratch. Its an Oblast, so a country within a country, they have autonomy, but their loyality goes to the Russian Federation and their military is integrated with that of Russia. They make excellent Spetznaz soldiers, aside from that since most Chechens are muslim and many speak arabic as well they interact with locals much easier in Syria.

I’d say that if you asked the average Chechen where their loyalties laid and they answered you honestly they say this, Islam first, the Muslim Brotherhood second, Chechnya third, Ottoman Empire fourth, and Russia last. The people who control Chechnya now are very brutal people, they scare me just as much as the Chechen separatists who massacred more than 100 Russian school kids did, they’re not the sort of people who should be running the country, they should either be in jail or mental institutions, so I’m afraid I have a different opinion about the Islamic fundamentalists and the people Russia cooperates with to help contain them. You’re right the second Chechen war started in 1999 when Putin was prime minister but he was head of Russian intelligence during the previous conflicts from 1990 onwards. This is what the wiki has to say post 2000, ….

Guerrilla phase by year: 2000, 2001, 2002, 2003, 2004, 2005, 2006, 2007, 2008, 2009 Although large-scale fighting within Chechnya had ceased, daily attacks continued, particularly in the southern portions of Chechnya and spilling into nearby territories of the Caucasus, especially after the Caucasus Front was established. Typically small separatist units targeted Russian and pro-Russian officials, security forces, and military and police convoys and vehicles. The separatist units employed IEDs and sometimes combined for larger raids. Russian forces retaliated with artillery and air strikes, as well as counter-insurgency operations. Most soldiers in Chechnya were kontraktniki (contract soldiers) as opposed to the earlier conscripts. While Russia continued to maintain a military presence within Chechnya, federal forces played less of a direct role. Pro-Kremlin Chechen forces under the command of the local strongman Ramzan Kadyrov, known as the kadyrovtsy, dominated law enforcement and security operations, with many members (including Kadyrov himself) being former Chechen separatists who had defected since 1999. Since 2004, the Kadyrovtsy were partly incorporated into two Interior Ministry units, North and South (Sever and Yug). Two other units of the Chechen pro-Moscow forces, East and West (Vostok and Zapad), were commanded by Sulim Yamadayev (Vostok) and Said-Magomed Kakiyev (Zapad) and their men.[85] On 16 April 2009, the head of the Federal Security Service, Alexander Bortnikov, announced that Russia had ended its “anti-terror operation” in Chechnya, claiming that stability had been restored to the territory.[86] “The decision is aimed at creating the conditions for the future normalisation of the situation in the republic, its reconstruction and development of its socio-economic sphere,” Bortnikov stated. While Chechnya had largely stabilised, there were still clashes with militants in the nearby regions of Dagestan and Ingushetia.

Im aware of that. But I dont see your point. Most Chechens are clearly pro Russian nowdays. They even had two Referendums and they voted both times to remain within Russia. Low level insurgency in the caucasus region is no different than the southern states in the U.S. dealing with Mexican drug cartels, about the same threat level. But in recent years most of them were eliminated or weakened to a point to pose minimal threat. If you were right Chechens werent fighting for Russia and for Syria against Turkey and wahabis and their supporters. But they do, and they won many battles. Helping to turn the tide of the war.

I checked out what you said about the Russians having Chechen special services in Syria and you’re correct, there were 1,000 Chechens deployed to Syria originally and they’re still there, I wasn’t aware there were any other Chechens in Syria apart from the terrorists in Latakia, thanks for letting me know. Both the article and my comments were directed at the Ajnad al-Kavkaz Chechen terrorist group, neither the SF article or my original comment mentioned the Chechen nation itself, this is what I said in the first part of my comment about the article,

I don’t think there’s any other terrorist group the Russian hate more than the Chechens, the Moscow opera house siege and the school massacre are just 2 examples of why they do. And I’m not so sure most Chechens are pro Russian at all, it’s hard to tell what they think on the ground, that madman that Putin placed in power is killing anyone who dares oppose him. And he was once an Islamic terrorist too, he used to fight against the Russians before he switched sides you know.

I’m not sure you can compare drug traffickers to religious zealots though, drug traffickers don’t sacrifice their lives for a cause but fanatics do all the time, zealots scare me a lot more, they never give up.

Brutality is relative. Dropping a bomb on a wedding party killing a 100people is brutal. Killing traitors whom work for foreign entities trying to undermine Russia and Chechnia isnt brutal its a necessity.

You’re right, “Brutality is relative”, but I much prefer the sort of tact and humanity Assad employs to do the same thing, too many innocent people end up dead and tortured the other way.

All that bullshit that you written doesn’t make any sense, chechens are normal people like everyone else, there’s people protecting their country fighting to eradicate terrorism and there’s some bad apples who felt under bad teachings and recruiting propaganda from the terrorists cells of the west.

you’re turning this into black and white you filthy propagandist, or you are so damn ignorant, but with such amount of ignorance you should avoid talking about something that you don’t know.

You’re the one talking BS, what you just said is absolute nonsense,

“there’s people protecting their country fighting to eradicate terrorism and there’s some bad apples who felt under bad teachings and recruiting propaganda from the terrorists cells of the west.”

Did the west tell them to go on on a holy Jihad to remove all non believers from Chechnya did they, but the Russians themselves said it was the Islamic fundamentalists that started the trouble, I trust what they say not you, they’re the ones who suffered the most from the Chechen Russian wars.

Go check out the Moscow opera siege, or the school massacre, or the countless bombings of Russians in Moscow, or the countless westerners the Chechens kidnapped and ransomed for money, or tortured and killed sometimes. The Russians hated the Chechens you wanker, they killed hundreds of innocent Russian children in just one school siege and you telling me the Chechens fight terrorism, they are the terrorists you dickhead. I saw a video once where Putin said “for every one of us they kill, we’ll kill a hundred of them”, I’ve never been able to find that video again but I’ve seen it with my own eyes. Ask any Russian what they think about Chechnya and the Muslim Brotherhood.

I used to feel sorry for the Uighurs too, what China’s been doing to them lately seemed to me to be unfair and immoral, that was until I saw how they operated in Idlib, when they started manically burning down all the Christian churches and holy places, and killing and torturing Syriac priests I changed my mind, now I think the same thing about them I do about the Chechens.

Pound them day and night after night.

I hope they used the TOS-1.

Keep the bombardment for at least a 2 week straight with artillery and air strike then launch a full attack with in the cover of air defense….As the line move forward the air defense unit must move forward aswell that’s why the syrian army need thor’s and good amount of mobile air defense so they could eliminate Turkey drones strike and artillery strike..They also need artillery locations spoter in order to strike after a few warning shot .