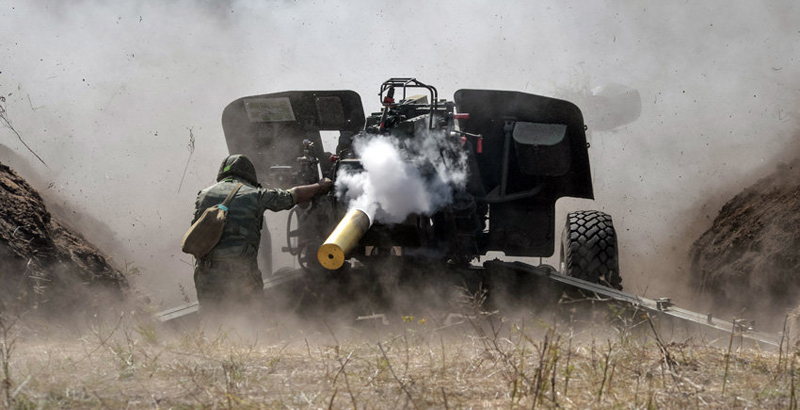 On February 16, a series of Syrian artillery strikes targeted an illegal fuel market located near the town of Termanin in the northeastern part of the Greater Idlib region.

The pinpoint strikes destroyed a fuel storage and processing facility run by the Watad Petroleum Company. Four people were killed and three others were wounded as a result of the strikes. The casualties were apparently workers of Watad.

Watad is known to be owned by al-Qaeda-affiliated Hay’at Tahrir al-Sham (HTS), the de-facto ruler of Greater Idlib. The company maintains a monopoly over the fuel market in Greater Idlib. It deals in oil illegally produced from fields controlled by Kurdish forces in northeastern Syria as well as fuel and gas smuggled from Turkey.

The strikes on Watad fuel facility near Termanin were likely carried out to punish HTS for its recent violations of the ceasefire in Greater Idlib.

Watad facilities in Greater Idlib were targeted by Syrian and Russian forces on several occasions in the last few years. The company’s illegal trade is one of HTS’ main income resources. Due to this, more attacks on the company are to be expected.

The Russian airforce and the Syrians need to hit every oil convoy with stolen oil,or better still take the oil fields back,if they don’t do that destroy them.

There hasnt been any oil transport from the SDFs the last 4 years. The connection was closed by the Turks.

That or those routes also transported fx weapns and medicines.

The market imports oil from Turkey.

Yes, absolutely… I remember when the Russians entered the war and gave the dirty Yanks a 2 hour ultimatum to clear the skies before they start bombing [ISIS positions I think]. The Yankee cowardly bitches cleared the skies in 22 minutes – ha ha ha… So, give an ultimatum to vacate all oilfields and then bomb them all, every single one of them. This is the main reason why the filthy Yanks are there, to steal the oil and send it to Iraq AND, I suppose, the Turds, er, I mean Turks, stealing the oil and sending it to Billie boy, the puppy of erDOGan the bitch.

The Blue Helmets (remember them?) reported that the only drinking water spring was hit, and precious drinkable is still burning exposing Idlib to the new humanitarian catastrophe. Local ISIS, sorry insurgence is asking from the US to deliver nuclear missiles, so they can put out the fire and save the water

When You take swimminglesssons, You has to take up Your nose now and then unless You are a sub.

Beautifully executed operation…. these oil thieves can now continue burning in hell. BTW, why does the reporter call the dead f*ckers “shuhada” as if these thieves are “martyrs”? Ha ha… anyway, burn you f*ckers!