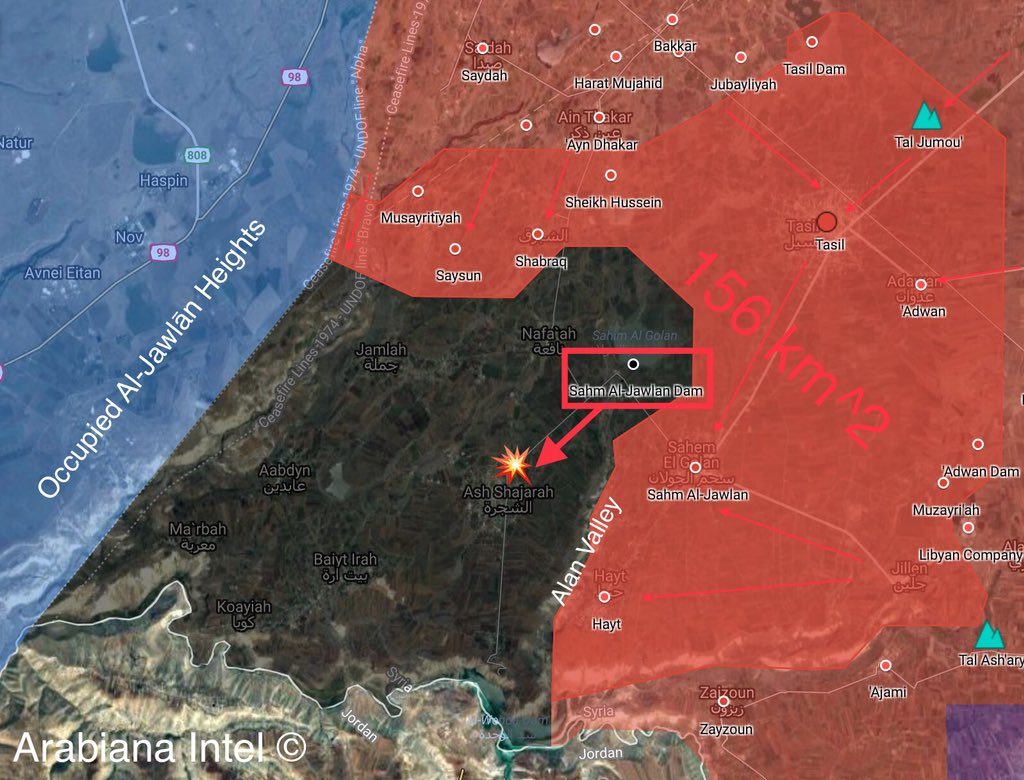 On July 27, the Syrian Arab Army (SAA) 4th Division and the Tiger Forces captured Saham al-Jawalan dam and the valley of Saysun in the western Daraa countryside following heavy clashes with fighters of the ISIS-affiliated Khalid ibn al-Walid Army, according to the Hezbollah media wing in Syria.

During the last 24 hours, the SAA liberated 26 villages and towns from the terrorist group, according to a report of the Syrian Observatory for Human Rights (SOHR). The UK-based monitoring group added that Russian and Syrian warplanes are still carrying out airstrikes on remaining positions and fighters of the Khalid ibn al-Walid Army.

The ISIS-linked news agency Amaq has not released any report regarding the situation in the western Daraa countryside yet. This indicates that the ISIS-affiliated group is on the verge of collapse there.

Currently, the few remaining fighters of the Khalid ibn al-Walid Army are hiding in the towns and villages of Jamlah, Abidin, Kuwayyah, Ma’arriyah, al-Qusayr and al-Shajarah.

If Israel keeps her big nose out of the SAA advance , we should see ISIS rolled up in Southern Damascus in the next few days I hope. :)

wanna go on? I can keep it up for several years.

Its the zionist warmongering banksters that should be hunted down,rothschild etc

Yes, exactly, the wahhabis should be all locked up in Saudi Arabia for their safety and for the safety of everyone on planet Earth.

The jew is the real enemy of the world.

This Al Qaeda, ISIS, and soon to be OSIRIS ans ZEUS terror organizations filled with wahhabis directed by Mossad… will never end until jews have Greater Israhell and can exterminate Muslims to the cheer of European and American public. Jews want YOU to demand the death of all Muslims, so the jew is supposedly not the one with the guilt and the blowback.

“Oh vey, Muslims are violent, look at 9/11 and the London terror attacks that put May in charge in the UK, her poll numbers were bad so the MI6 got the public scared and May “elected”, those bad bad Muslims, goyim. Goyim, don’t you want to live in a world free of hatred of the jew, a world where the goyim work 120 hours a week, make 60 bucks a week and keep getting in debt to jewish bankers, well that is the world the jews are trying to create, but these pesky Muslims are getting in the way. Assad with no Rothschild private bank. Assad must really hate the jews to not hand over the money supply of Syria to the jews. The world is way overpopulated, about 90% of the goyim need to die. Gevalt, I should not be speaking with the sub-human crowd so freely. Remember to watch the news on how bad Muslims are and how you need to fight wars in the Middle East.”

Think I am kidding:

The jew will have you working, your sister on the beach with the jew serving him tequilas.

The jew will have the weapons and your only defense is a butter knife.

Has there been precedent of this: Lenin and the jews in Russia.

The early years of the Soviet Union will seem like a vacation compared to what the jew has in store for you.

Why do you think Trumpstein married all the kids to jews. 2% of the population are jewish and all married to jews. Trumpstein knows the future of the world is supposed to be jewish. You will either be a jew, a shabbos goy or a slave… says the jew.

And this is what the Christian zionists are working toward, this type of world. They think it would usher in the anti-Christ, and then Jebus would save them. The jews know the game, don’t expect Jebus to save them, and expect a world better than they could dream or imagine.

This is partly why I don’t take kindly to Putin not giving Assad S-300s, selling Assad S-400s and later S-500s and T-14s and allowing Iran to develop nukes to point at Israhell. Because the West and fallen to jew worship.

Why is this so difficult to understand, it’s plain simple when you are not doing propaganda.

Hunted down and publically hung!!!

AM Hants
Reply to  Val Shadowhawk

With full humiliation, publicly of their crimes, supported by the MSM.

Side issue – “Quake in northern Israel was registered at a 4.6 magnitude.”

4.6 is good, any more and it might affect Syria!

I still remember an Israeli top government official saying that an earthquake that hit Italy some years ago was the way god was punishing Italy for voting against Israel in a UN resolution.

Well they tempted fate, so let them enjoy.

AM Hants
Reply to  John Whitehot

So love karma, when it comes to collect.

me too in a sense, although it’s very different from concepts like those that jews believe since the bible (like god destroying people to avenge some other people)

have these idiots ever heard of aiming?