The Syrian Arab Army (SAA), the National Defense Forces (NDF) and other pro-government factions have liberated a large area from ISIS southwest of Palmyra, according to the Hezbollah media wing.

Thus, government troops have de-facto secured the most important areas south of the Palmyra-Homs highway and now are clearing the rest of the area from vestiges of terrorists.

A majority of ISIS units have reportedly retreated from the area. 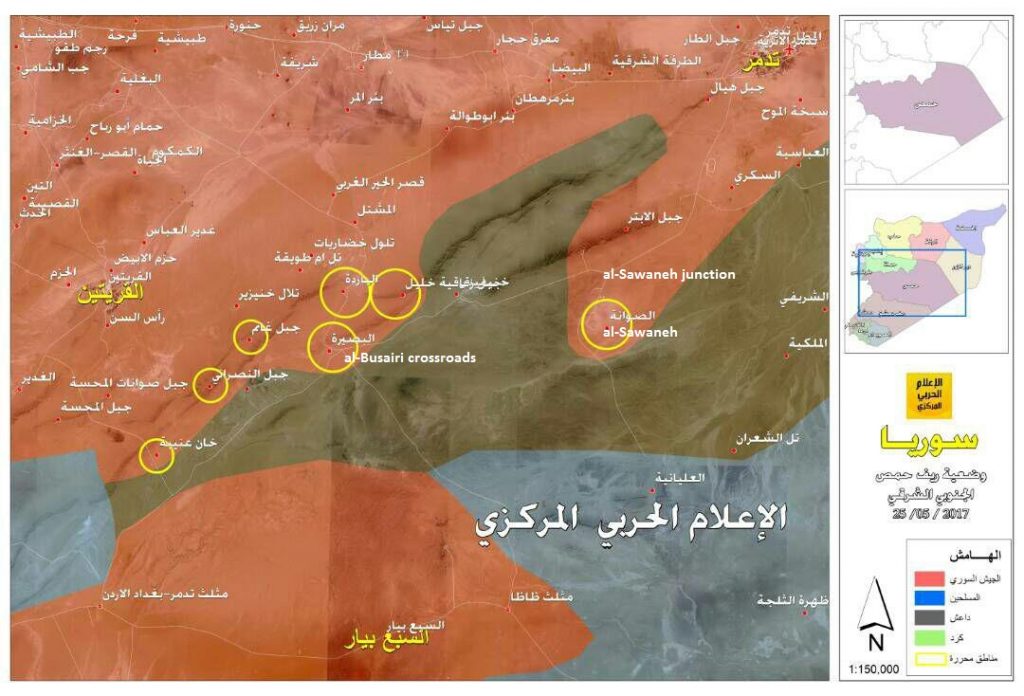 Notice that there is very little resistance and ISIS has withdrawn from that area the SAA progress is very slow. As I mentioned before, SAA strategy is not very impressive and many liberated area by SAA are very thin and can be outflank and easy penetrate like we see many times in along Ihtriya-Khannaser road

Yeah… lets just rush into a place that is laced with mines, ieds, boobytraps, etc… Hey I know, how about you go first…

Dude, just because isis is gone, doesn’t mean it’s safe to go in there….

Hahahahahahha no. Kurds are a force of nearly 50k vs raqqa and they still have not managed to get into raqqa. Experts estimates that there are 10k tops ISIS jihadis in raqqa. The SAA is fighting against many fronts and slow but steady progress is important.

why are so much kurds? ussad has 5x more people in hos area…

so, kurds are better

How old are you jew? You cant spell and know nothing except making troll comments, which your government pay you to do. the SDF will be obliterated by Turkey if they try to form a state or occupy arab lands, and will be pushed back to their cantons. So that proves how truly thick you are

jew is your 1 cm3 brainy, you fascist!

Kurds and SDF have a force larger then 50k, however, some 20 to 30 k are in Afrin, so not invlovlved. Others are guarding cities, borders, manning roadblocks, are strategic reserves, are fighting IS and rebels elsewhere and guard against SAA.

So, as for the advance on Raqqah, I would not be surprised to see the assaulting force at 30k, tops.

Normally, an attacking force has to be 4 to 5 times the number of defenders to be able to succeed. So, if you are correct, then the SDF has to reinforce its numbers, the more so as they still lack the heavier arms.

With the entire US and NATO airforce and special forces, and artillery to back them thats all. And they have occupied Arab lands, and are only going for Raqqa. And why did they invite the Russians to block the kurds? Kyke troll

so, russia is shot in comparison to some us soldiers? the usaf is 5-10x less active then ruaf. and there are also the saaf

In all fairness, the SAA is a shadow of its former self after 6 years of civil war and mass desertions. Except for some elite units the average SAA soldier is not that well motivated. So the SAA leadership, not all of which are that good to begin with, has to keep that mind and make for slow concerted pushes. And that’s excluding the fact that for years whenever the SAA did do a rapid advance the Jihadis proved very adept at sudden counter attacks. Just look at the SAA’s Tabqa offensive of last year.

As for the Ihtriya-Khannaser road, that’s basically a road in a sparsely populated desert. You can’t defend a road like that with heavy concentrations of troops with WWI levels of fortifications. They would be bored out of their mind to begin with and the SAA just doesn’t have the troopnumbers for that as well. A mobile defense makes more sense in that regard. And credit where credit is due, even though the Jihadis from time to time do manage to cut off the road, so far the SAA has kept it open for years now. The same conditions that keep the SAA from securing it full time apparently also keep the Jihadis from cutting it off permanently.

You have no idea whats going on there…

you are right. the SAA was never good

Fuckoff you dickless jew, your mum was never good in bed

fascists, on russian site is forbidden to write such sentences!!!!

That is correct. We really do not know how many Hezbollah, Afghans, Iraqis, Iranians and Russians were involved, We just know it was many thousands when we regard the number of Iranian generals getting killed there.

Observers, including Russians and here on this site, calculate the number of SAA as below 100k, where they started at 300k.

So, you are right, you, and maybe we too, do not know what is going on there.

Southfront did an analysis a few weeks ago, something like 80k SAA, 150k NDF and at least 50k Iranian troops/mercenaries. So about 300k compared to the 100k max jihadis.

Only thing that matters now is that SAA is winning, will win, and is manhandling the jihadis like Steven segal does to everyone in his movies lmao

usually the armies after 6 years war are better. look back in the age of 2nd ww

Dude, you just wen’t full retard. Never go full retard. No army gets better during 6 years of war while they are at war. The SAA has done remarkable things, survived invasions and proved experts wrong. They have kept this war going when others would have lost it. They are fighting many jihadis on multiple fronts while the jihadis are better equipt than the SAA. Now, since Russia joined the war, the SAA has advanced incredibly much and is currently winning this war. It is only a matter of time before ISIS is defeated and all of the attention will be shifted towards the FSA jihadis (Al Nusra). But the FSA will be easier to defeat as they only have IDLIB as stronghold because they were all forced to retreat there. The SAA and the russians should let bombs rain over IDLIB day and night. Can’t wait for that to happen.

maybe you are full retard :DDD

With more experience, they improve (should do at least; apparently after 6 years, the SAA are “inexperienced” still!), so basically a smaller, 80k army will be much more effective that a 250k who melt at the first sign of trouble.

no, the red army, chinese army, israeli army were unexperienced.

on the other hand, the saa was experienced army. attacked israel, attacked lebanon ;)

Well, those wars were a long time ago! They didn’t really do much active fighting in Lebanon, and sweet Jesus, they got their asses handed to them by Israel. Twice. So yeah Sol, inexperienced and frankly terrible when they got stuck in, but they’re getting a little better! The 5th Corps and Tigers etc.

the Jew army cant fight without US aid, and its pretty tough against unarmed civilians, but would be crushed by the top armies in the world. Go cut off more of your dick and worship money, the Nazis were right, we defeated the wrong enemy, they were doing Europe and the world a favor until the yankees jumped in, now look at the middle east, it has gone from being mostly secular to mostly islamist. Thats your legacy, kyke troll

You must consider, that the mercenary armies and Isis also get US and Israel satellite imagery for their planning and have good info on SAA composition and positions, where as SAA has worse info. Also western commanders advise on their tactics and where to strike weak points.

Then why did the US lose in vietnam after 10+ years of fighting? You can wish all you want for the SAA to fall, its never going to happen without a nuclear war. You only exists because of 3 billion a year in military aid so dont talk shit, when are you going to grow up and defend yourself without uncle sams help? You are children of the US empire, a curse on mankind and a plague on the middle east.

because politicians decided. usa could win. like ussr could win war in afghanistan. simply there was no political decision for harder war.

i stand on side of saa, but i also clerly articulate, that the strategy is completely wrong. and are cowards both the soldiers and citizens. and assad is weak, if during 6 years was not able to reform the structure of army.

The effortless counter attack to the Tabaqa offensive couldn’t have had anything to do with it being a thin, long salient surrounded on all sides right? The SAA were never strong, they’ve always been useless. So many defecting early on demonstrates their lack of will.

Building a massive wall in the desert would make for an easy defensive line, especially with air support available! “They would be bored” Oh no! And this lie again; they have a surplus of troops, 3 times every enemy combined!!

And you did everything to destabilize the country and supply jihadi groups, yet still they stand and the majority of the population in the more secular east still support Assad. The kurds only move with the whole of NATO backing it, otherwise they would still be in their cantons where they belong, and believe me they will return there, Turkey will see to that. And what makes you think that any US presence will last when the war is over, they will be under constant attack from the SAA free to harass its illegal bases since it is an occupying force, shia from Iraq on one side, the SAA on the other, how long will you keep this Alamo style outpost surrounded in the dessert, without declaring all our war, which means a shooting match with Russia.

The SAA have accomplished quite a lot given its antiquated equipment, compared to jihadis armed with NATO equipment, and in spite of its losses has recaptured Aleppo, Homs, Palmyra. Once the war against IS ends, it will turn to an all out bombing campaign in idlib, and the other terrorist controlled pockets in the south. The US will be fighting a losing war and push hard for partition, which wont happen because turkey will nuke any kurdish state.

The only thing keeping the entire SAA from attacking the FSA scum and UK/US backed terrorists is the fact that they are fighting on several fronts against well supplied terror groups, remember you sent half a billion in arms to them, while the SAA use soviet equipment. Whats not impressive is that in spite of that amount of support, your terror buddies have not toppled the government, and the Obama strategy has been a spectacular failure.

The trump nazi cant understand the war, so its the generals deciding what piece of land to occupy, you have invaded and attacked Syria without a declaration of war. That’s how “impressive” your failure has been, all you have left is to balkanize Syria as you do with all your enemies, occupy, bomb, balkanize and promote the rise of islamic fundamentalism. Every country you invade results in the spread of jihadi terror, and the only thing keeping it from your doorstep is the convenient ocean that separates the US from the middle east. May it come to your town just as you have unleashed it on Europe.