The Syrian Arab Army (SAA) secured early on August 23 most of the remaining towns, villages and hilltops inside the militants’ enclave in northern Hama.

Pro-government sources confirmed that the army captured the key towns and villages of Kafr Zita, al-Lataminah, al-Buwaydah, Latmeen, Lahaya and Maarkaba as well as the Fas hill. 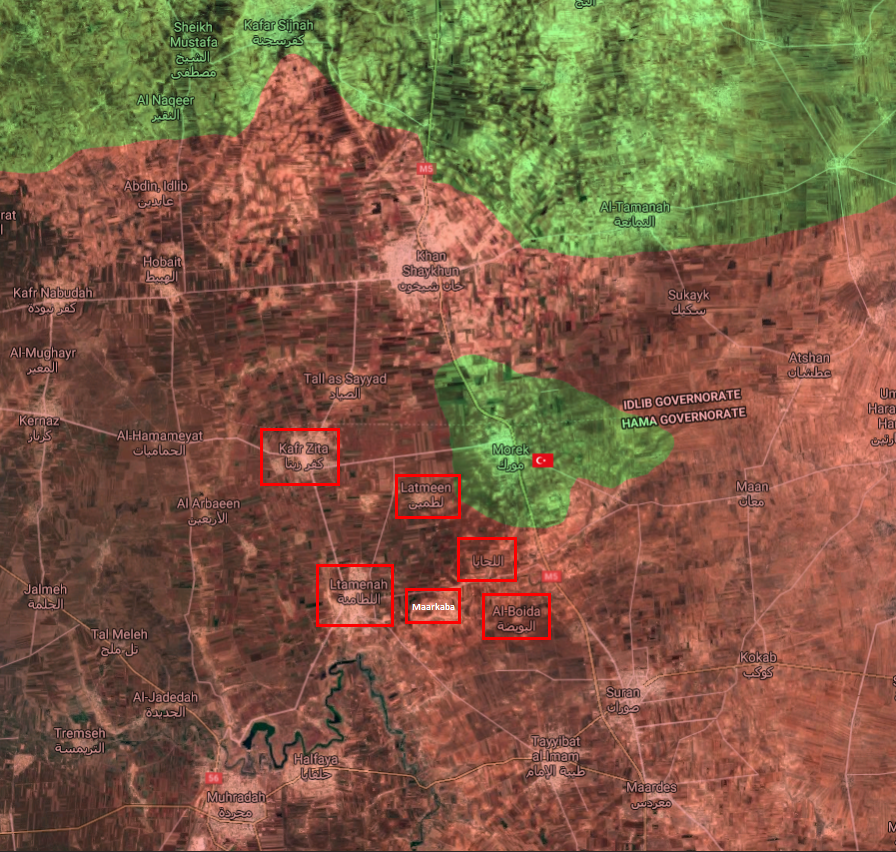 The town of Murak and the Turkish observation post, south of it, are now the only two positions, which are still out of the army’s control. According to the Syrian Observatory for Human Rights (SOHR), the army is now working to tighten its siege on the Turkish post.

The SAA initiated its military operations inside the militants’ enclave a day earlier, capturing the village of Sayyad and two hilltops.

With the capture of these towns, Jaysh al-Izza, a close ally of al-Qaeda-affiliated Hay’at Tahrir al-Sham (HTS), has lost all of its strongholds. The group could dissolve itself, or join one of the Turkish-backed coalitions in northern Syria soon.

stupid is as stupid does
Reply to  Shy Talk

What “false flag” and to attack how?

Shy Talk
Reply to  stupid is as stupid does

who knows WTF is going to happen, who knows what the Turks are up to or whose side they are on, not me i’m just speculating, i hope the SAA win back every inch of Syria including the Golan heights, and the country returns to peace and prosperity

Time has come for Asanta’s other partners to remove this Turkish Cocoo from its rat infested nest.

Soon, all terrorists will disappear and magically will be transformed into Turkish-backed coalition. No more attacks against the SAA or russian bases. That’s the only way for Turkey to keep Idlib. Will Syria fall in this trap ? I’m afraid Putin will agree !

Yes, it is possible, but so sure since Russia air basis would be always in danger. The whole Idlib area must be under Syria government control.

But you must have in mind that Turkey (USA-Israel-NATO) will always support terrorists in Syria, as far as there are groups of them there. So, peace is very unlikely in Syria with terrorists somewhere there.

I guess what he means it that: If Turkey can force the Jihadists to respect the Idlib deal, then SAA would be not allowed to attack them, and the whole Idlib mess would be frozen until eternity. Thats why we can thank the Jihadists for being so stupid as their attacks allowed the SAA to finally after nearly a year get the green light from Putin to attack the Jihadists.

That’s exactly what I meant.

What’s fighting in Syria for the Syrians it’s the Syrian/Russian war machine, now a machine in blitz time. By the way, Assad and Putin are part of that (now) blitz war machine.

Hey, Turks! Get packing, Green Buses are coming to take you back to Uncle ErrDawg’s!

the will end the FSA into idlieb! yes

Jaysh Al-Izza has lost ALL of its strongholds. Can’t help but like the sound of that. Izzanists are now licking HTS arse big time and feeling utterly humiliated. Love it!

I expect Turkish personnel will be given safe passage out of their pocket, and that it will be done in a high-profile way to win goodwill from ordinary people in Turkey. (Bearing in mind that Turkey has military conscription, so many Turkish soldiers did not volunteer to join the armed forces, still less be sent to Syria, and that the secularist main opposition Republican People’s Party [CHP] is relatively friendly to the Syrian government.)