In a surprise move, the Syrian Arab Army (SAA) advanced on August 10 in the southeastern Idlib countryside, capturing the town of Sukayk and its key hilltop.

By advancing in this direction, the SAA is seeking to besiege the remaining militants in northern Hama. The army already imposed fire control on most of the supply routes in the region by capturing Sukayk hill. 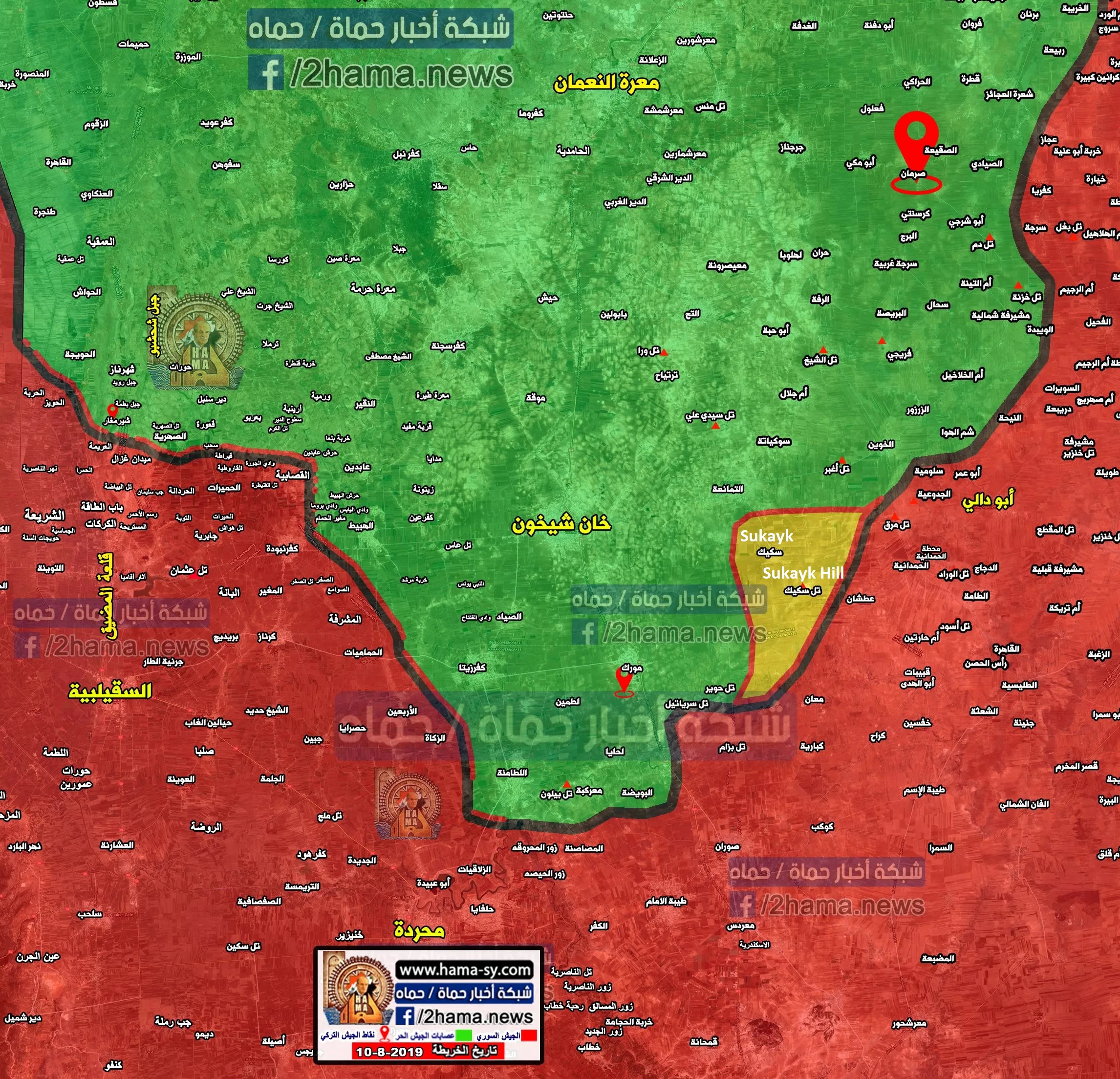 Pro-government activists claimed that dozens of fighters of Hay’at Tahrir al-Sham (HTS) and its allies were killed and injured in the course of the clashes in northern Hama and southeastern Idlib.

Some sources claimed that the SAA is already advancing towards the town of al-Tamanah in southern Idlib. However, it appears that the army is still working to secure the outskirt of Sukayk.

The upcoming few days could mark the full collapse of the militants’ positions in northern Hama, especially in the towns of al-Lataminah, Kafr Zita and Murak. The fate of a Turkish observation post located within the militants’ enclave remains unclear.

maybe we will see a ‘classic’ move from the SAA. move the attack to the west ,advancing in order to encircle the rats and the wipe them out……..

Perhaps the Turkish Observers would prefer to become Syrians?

Haha yeah would be hilarious if all surrounding terrain would be liberated. Observe that motherfuckers!

Turks will be allowed to leave on foot. Leaving all equipment and ammo behind for the SAA. :D

S300 to syria, s400 to turkey the source of weopons is the same. No need to scrounge

But the Turk equipment appears to be well maintained. SAA can form a Turkish equipped unit and call it the Idlib Brigade. The unit might be able to fool the Jihadist rats and go for a nighttime drive behind HTS lines. :)

True, it’s been noted by the advisor s that arrived that supplied equipment that had been abandoned by the SAA could have been easily repaired. Well either the SAA has listened or decided otherwise. It’s a judgement call wether or not to maintain. Depends on the style of the force

Turk equipment looks rather fascistic. Turk proxies just got finished shelling a superpowers positions in Syria. It looks like the Turks can be two faced on multiple fronts

They finally opened the East front. Looks like they were waiting for Al-Qaeda to go all in. Kabani being liberated would be a bonus.

Sukayk has not been conquered yet.

Hey frave and bree of the Moronland, go kil yourself somewhere else.

Learn how to write English, retard.

Why is that homosexual Trolls like you always tell other people to go kill themselves Jorge, don’t you ever worry you might tip someone over the edge with you revolting comments and actually cause them to do it, you need to get some help buddy, you’re a borderline weirdo. And all in response to a simple comment like, “Sukayk has not been conquered yet”, why would you want someone to kill themselves for that completely innocuous comment. I’m surprised no one’s flagged you yet.

Willing, go see if outside is raining, Velociraptor flagged and blocked me long time ago, so why don’t you join him?

I’d prefer to flag you in person, face to face.

Well, I would call the police. hoping not to have to use my rights of direct action and self defense. By the way, now speaking seriously, Sukayk has already been liberated and Kabani is close to be liberated.

Post-scriptum (Ps): Australia and North America were conquered and Sukayk has been liberated.

Every day that passes without a single major Empire victory is one day closer to the rest of the world getting organized to bring about a multipolar world.

Complete with the rule of law.

As opposed to the law of psychos.

The fate of the Turkish OB remains clear, they must go.