The Syrian army, Liwa al-Quds, Hezbollah and other pro-government units have liberated Al-Sukkari district of Aleppo city from Jaish al-Fatah militants, according to pro-government sources.

Militant-linked media outlets deny these reports. However, evidence from the ground and local sources are on the side of the pro-government description of the military situation in the city.

It’s obvious that Jabhat al-Nusra and its allies from Jaish al-Fatah have no chances to win this battle.

Government forces are also advancing against militants in the districts of Bustan al-Qasr and al-Kallasah. 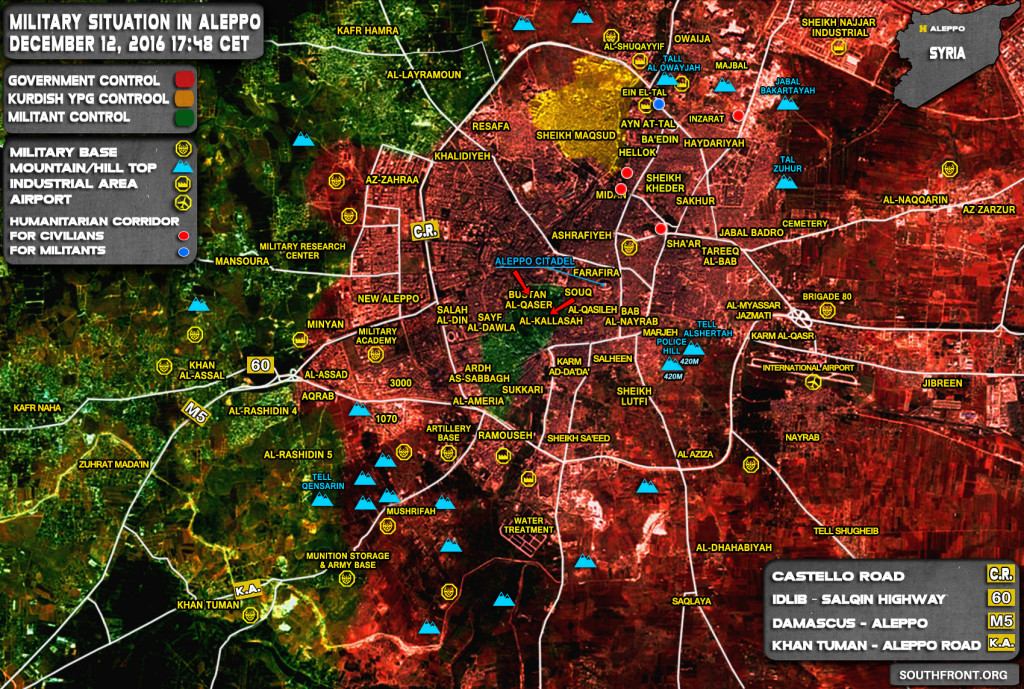 how about palmira no reports yet

its a sad day

No more ceasefires. Finish them all

No rest for the wicked. Slaughter them all.

no more russian parliment says no more talks will be made

Despite Palmyra and the lessons learned there… Hey… Let remember that taking Aleppo is a great job and its near done. Its VICTORY…

From what I heard its over

The cease fires were to allow tens of thousands of civilians to escape. They were necessary.

Aleppo is more important than palmyra. But the loss of Palmyra is still a huge loss. However, if you recall idlib forces launched a summer offensive with 10,000 well-equipped soldiers. These were newly trained forces that have been preparing since January. They were pushed back bUT launched a second offensive with 8,000. They were also pushed back. Now we hear an estimated force of 5,000 assaulting Palmyra from six directions, three converging on the city and three attacking its supply line. These attacks required multiple command centers to coordinate on a secure wireless communication network that the CIA should have heard and could have setup logistics for. If we consider the CIA aided nusra and others in idlib but do not aid ISIS in any way, then you must ask: How many of those fighters came from idlib, not raqqa?

Palmyra is not very important.If you deploy the Tiger forces there it can be recaptured without problem.But I think the main priority will be in other province.

And in what province? Maybe ISUS 2nd stage of this offensive is against Deir Ezzor? Holding on to Tiyas airbase seems to be a problem right now! Other areas are not a top priority.

There will be no safe places for people as long as terrorists remain in Allepo The best way to help local people is to hasten the release of Allepo and finish the shots soon so that people are no longer at risk of being used as human shield, nor being fired while fleeing the site if they can or get hit by bombs and fires from both friendly or terrorists for revenge in another near place Meanwhile any pause will benefit the terrorists more than the people they want to rescue for all the risks and dangers that this entails as has been the case with all previous breaks.

The whole country is important, even the Goland highs ! ISIS also has retaken the oil field near Palmira. Syria must be free of all terrorists (hard and moderated) allover Syria country, non place is less important than other one !!

How many terrorists are still in the city?

Surely they’ve got to be ready to fully surrender by now? Either they’re expecting a surprise Turkish/Terrorist assault from the north to save them or they’re just plain stupid. The former is not going to happen, as it will take at least a week or two for them to take Al Bab (if they can at all). So more likely the former. Aleppo will be freed by the end of the week.

There are reports that SAA have captured the whole city already.I am not sure whether they are true.

The question is ,what is the agreement about surrender terrorists.Do they will move to other place with their weapons?What about Westerns military experts traped insinte Allepo?What is the secret Kerry-Lavrov agreement?

In other relocation agreements, they can take their light arms and anybody can get on the bus. It may not seem right but has worked for Syria. Getting rid of pockets and freeing up military force to pressure other pockets. Send them all to Idlib province!

Great news! it is reported that Jihadist have agreed to be relocated to Anadan plains up north. This makes sense, using the more secure castello road. It will take some time and many green buses. If true, this is a great victory (finally!) This is a huge blow to Jihadist will to fight!! Many SAA seasoned forces will be freed up for other areas (Tiyas airbase has need for tiger forces)