On July 16, the Syrian Arab Army (SAA), the National Defense Forces (NDF) and their allies liberated the key town of al-Harah from militants in the southern Syrian province of Daraa. Earlier, government troops retook the settlements of Masharah and Zimin.

Al-Harah had been of the militants’ remaining strongpoints in the area north of the Daraa provincial capital. Liberating this area, the SAA and the NDF set conditions for further advance on positions of Hayat Tahrir al-Sham (formerly Jabhat al-Nusra, the Syrian branch of al-Qaeda) and its allies east of the Israeli-occupied Golan Heights.

Should government troops finish the liberation of this area, they will focus on combating ISIS units, which controls a chunk of territory near the Golan Heights, west of Daraa city. 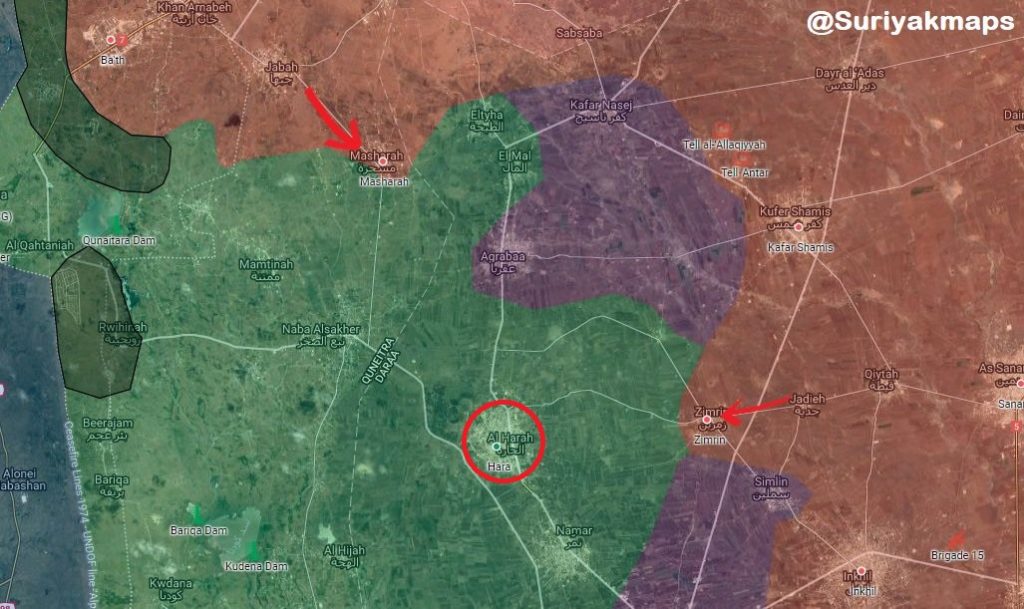 Maybe someone will be interested. FSA spox claims that Russia warns them that Idlib Offensive is planned for September.

They’ve poking the Russian forces too much.

psychological warfare. Is good to let your enemy seating on the edge waiting to be bombed to smithereens, while watching what is happening to the ones under attack and knowing they have the same if not worst. It breaks ones spirit.

It will be far worse for the US Coalition of Terror in Idlib as there are no Green Bus routes out if Idlib. :)

Good. They will get exactly what they deserve.

Precisely. They have learned from their experiences in Daraa and clearing the areas around Damascus.

Let them know what’s coming. Give the militants time to mull over whether to fight or surrender/reconcile. The terrorists have seen Syrian success in wiping out the terrorist enclaves so I expect internal divisions will rise to the surface and then they can fight among themselves to resolve their differences. While all this unfolds, I expect Turkish intentions will be revealed.

By the time the assault is ready, Assad and his allies will have a pretty good idea where things stand which will facilitate a smoother operation.

ISIS =Israhell,that’s when the fun really begins.Israhell will be screaming when they see their ISIS creation getting destroyed right in front of them.What will they do?

The area Al Harra and the radar station plus al Haraa also the triangle of death are under SAA control the village of Aqraba will soon see the SAA enter.

Israel is ISIS-air defense and support. I hope Russia could do something (?) about it, but I doubt it, Russia does not want to upset this criminal country.

Laugh as they die. They love to see muslims kill each other.

yes army syrian next to the more importante point strategique a golan and quneitra the tell al-harrah!! excellente big news!!!!:)

Sad to say 5 SAA lives were lost on attack in Aleppo.

Al Jazeera is Qatar owned media. Not reliable. It’s source is from UK-based Syrian Observatory for Human Right. Anti-Syria just like the White Helmets. How come Al Jazeera did not report on Saturday Israel was hit by 200 rockets and mortars?

This information is local and Syrian Armenian last by Syriana Analysis Kevork Almassian both Assad supporters.

Note: ISIS and ISrael are not states. US and Europe want to use these proxies to take lands and Petrol from Middle East.

We saw a couple of weeks before that there was no political border between Syria and Palestine because that is one country. Now the ISrael commander Netanyahu have drawn a line that this is political border. The self proclaimed political borders and states are fake.