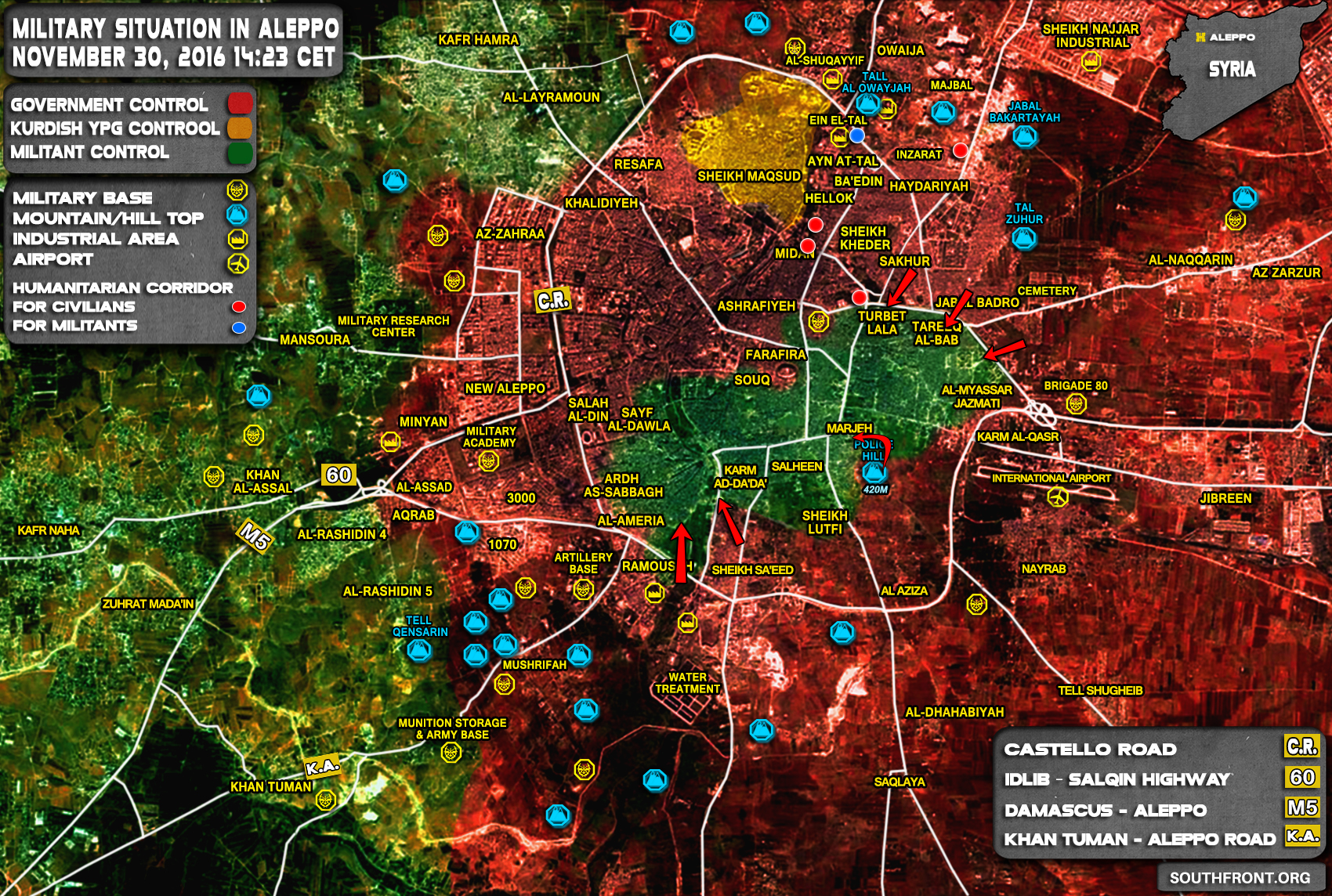 By now, the army has liberated the neighborhood, according to the Syrian Defense Ministry.

Governent forces are also advancing in Amiriyah and Sikarry neighborhoods.

There is little SAA activity on southern side and will provide Rebels opportunity to attack externally. Usually they are good in penetration attacks, although SAA definitely will prevail after a counter attack but this will result in delays , loss of lives and further destruction of infrastructure.

Pre-emptive attacks or strikes would deter the rebels who are already gathering and preparing for attack from outside to relieve pressure to besieged rebels inside East Aleppo.

luckily airforce will pound them from idlib to the border and back in midtime killing 1 rat by another. ^^

woah, excellent news ;D. I think Aleppo will be liberated b4 the end of the year if the SAA keeps advancing at the current rate.

Easily, at this rate at least! Look at it now, such a sad little blob.

Assad needs a big heart, reconciliation not recriminations with the citizens of east aleppo show them why they were better off with you.

The syrian people have suffered horribbly, i pray for their dead, i beesech the living build a safe/secular state that protects the rights of all citizens.

The jihadis and tbe western backers have done a truly evil by the people of syria, for the sake of ousting assad, this conflict will be etched in my mind until the die.

The destruction inside syria is totally stunning, i have not seen damage like that since watching bombed out husks of citys after months of saturation bombing in ww2 footage.

Aurelian ; Assad is a Medical Doctor , he has a big heart . 150 soup kitchens were opened in the last 2 days to feed the Aleppo citizens who were able to flee rebel jihadist controlled areas. The Syrians do not need to be shown why they are better off , they know . 80% of Syrians live under the protection of the Assad government . Sunni’s , Christian’s , Druze , Kurds , and Shia , all back the government forces (SAA) . It is not a civil war , despite what you have been told by the US/UK . The ISIS , and Al Nusra are mostly Saudi’s .

Never could stand those carpet baggers in the kingdom, always thought if they were gonna do regime change that would have been the place to start.

The Saudis say jump the U.K says how high, i despise my government for this betyral of all that is decent.

I Firmly on Assads side, and hope the SAA&ALLIES prevail, in the horror show i do understand the foregin mercenaries backed by the carpetbaggers/the west are responsible for the death&destruction of a sovereign secular nation state

Sorry but this is a bit stupid attempt.

Assad is a ruthless disctator, co responsable for the destruction of his country. He is almost as bad as IS leadership.

He does not control 80% of the syrian populatian. As some 25% fled the country, he would be in control of more than those remaining and he is not.

Rebels control some 2.0 to 3.5 million, say 15% of the population and IS something like that.

Non Assad controlling therefore between 50 and 60% of the population. Not 20%.

Kurds and Syriacs and arab allies, together some 25%, do not support Assad at all. They cooperate sometimes and somewhat as long as it strengthens their agenda.

In the end either Assad acknowledges their autonomy or there will be a controntation.

i would rather have assad than those carpet baggers(Saudis) any day of the week.

Following this conflict from the start I noticed something early on. The mainstream western media used more or less the narrative you relate above. However if you checked out the narrative in the muslim world it was that Assad was an aspostate and a heretic. The focus was on religious issues. It was therfore no surprice for me that the bulk of opposition was made up of jihadists motivated by religious divisions. This is of cause nothing new in Syria. The same occured in the 80s with the muslim brotherhood although on a smaller scale. Western powers new very well that there was no secular opposition with the power to challenge the regime. Only religious fanatics were ever going to put up a fight if given enough weapons and western media propaganda backing.

You might be right in this. As a secular society we tend to underestimate both the folly and the fury of religious sectarianism.

In the meantime in the north there is a secular and armed opposition to Assad, the SDF. As their aim is not so much anti Assad-ism but emancipation of minorities and women, they might settle for autonomy within an autonomous federate state within greater Syria.

If Assad is indeed a reformer, he must be able to make the transition from arab nationalism to multi ethnic secularism.

Nationalism is a much better choice. Syria is already multi ethnic and multi cultural which made this situation possible in the first place. A stern warning to the situation evolving in Europe.

Stop reading from western MSM talking points. Assad is NOT a rutlelss dictator but a reformer. It was the radical Islamist factions and their threats to use new freedoms to kickstart teh Islamisation of Syria that stymied his original attempts at national liberalisation. Now that the Wahabbi nutters have shot their bolt and will be a spent force, Assad will have a free hand to re-engineer his nation, and their is nothing the US, French, Brits, Saudi/Qatari camel-fondlers or feckless kebabs can do about it :-)

Love you too girl.

No. The perpetrators and supporters of violent foreign-supported jihad need to be held accountable for their crimes.

War crimes trials must be held. Then we can hang the bastards! :-)