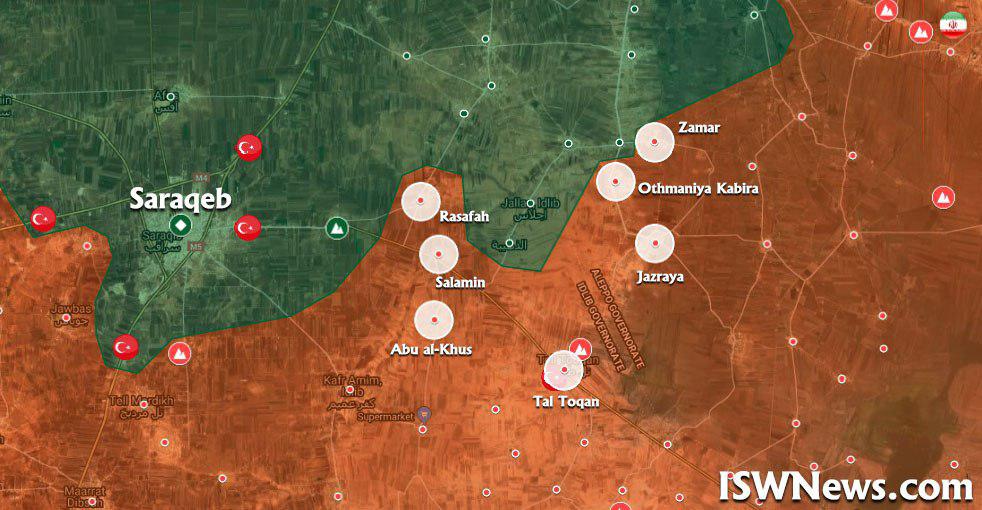 Defense lines of Hayat Tahrir al-Sham and other favorites of foreign powers supporting ‘the Syrian democracy’ are collapsing in the province of Idlib.

Following large gains on February 4, the Syrian Army continued advancing on February 5. Government forces liberated the town of Resafah and several nearby villages. Thus, they isolated the militant stronghold of Sraqib from the eastern direction.

The advance came amid an intense bombing campaign by the Syrian Air Force and the Russian Aerospace Forces. Turkish observation posts created in the area apparently do not help to contain the Syrian Army offensive.

If the situation develops in this direction, Saraqib may be fully encircled by the end of the day.

In blitzkrieg the whole Syria would be liberated within 4 days.

Don’t worry the whole of Syria will be liberated, regardless of the time.

Let’s see, how far they reach today. All the best to SAA!

I wonder what capability the terror gangs have for a counter attack that could threaten the extended supply lins of the SAA? Would Turkish troops need to openly support a UN designated terror gang to achieve this? I am sure that this scenario has been planned for though by the SAA and allies.

Maybe their next move is to have a whining session in a UN-meeting to stop “the cruelty of the Assad troops”. We all know this strategy when their efforts did not run well for them… And in the ceasefire their comrades from IDF or S.Arabia or whatever shthole will supply them new weaponry…

Yes, we have seen this fake scenario far too often.

On the map I can litterally see the cauldron grow :) Good luck!

Saraquib to fall soon. Good news. SAA & Russians & Allies seem to have an excellent run these days. Congrats and keep on besieging those beheaders and turkey garbage.

Euangelion! Good news from the battlefield!

What are those Turkish Observations posts doing?…..hopefully they won’t be so foolhardy to fire upon the Syrian Army!