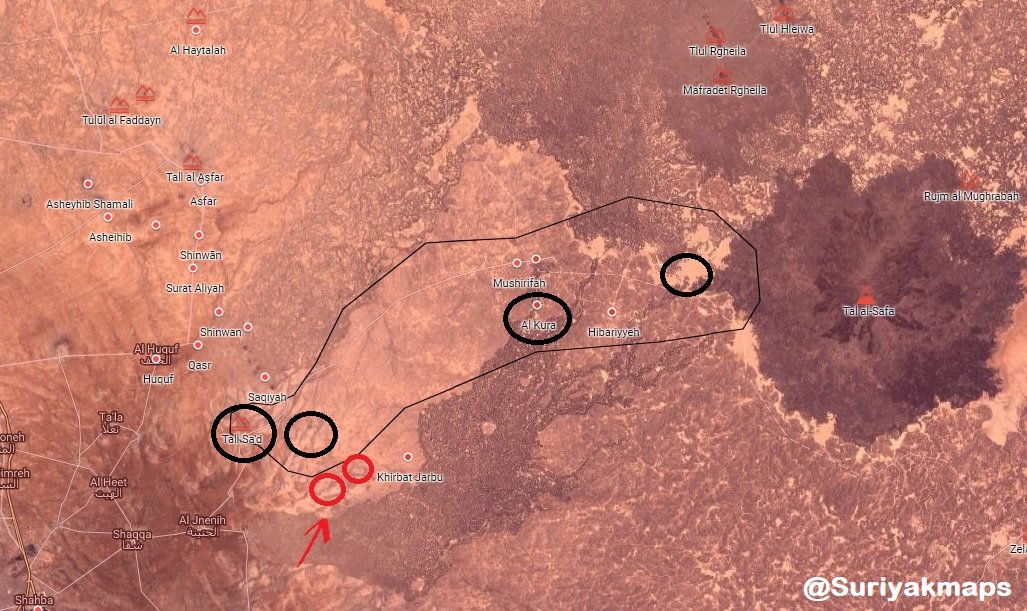 On June 7, the Syrian Arab Army (SAA) launched a large scale military operation to eliminate the remaining fighters of ISIS in the eastern al-Suwayda countryside, according to Syrian pro-government sources. Reportedly, the SAA managed to capture the village of Ashrfya and the area of Beir Aura.

A day earlier, the Syrian pro-government blog Muraselon reported that warplanes of the Syrian Arab Air Force (SyAAF) launched a series of airstrikes on several positions of ISIS in the villages of Tell Sa’d, Tamutha, Ashrfya and Aura. Local sources said that the SyAAF conducted more airstrikes on June 7.

Meanwhile, the Syrian Observatory for Human Rights (SOHR) reported that 15 soldiers and officers of the SAA and 9 fighters of ISIS were killed in the clashes, which were not limited to the eastern al-Suwayda countryside. According to the sources, the SAA clashed with ISIS cells south of the T-2 station in the southern Deir Ezzor countryside.

A source in the SAA 9th Division, which is currently leading the attack in eastern al-Suwayda, told SouthFront that the SAA mission in the region may be finished within days because the remaining fighters of ISIS there are poorly armed.

Ed
Reply to  MADE MAKER

Fuck you…. and your headchopperfriends…

The truth hurts don’t it?!!

Not really…True.. 80% of the world is a bunch of ignorant Retards… Earth and it’s natural habitat already destroyed for the most part… if there ever comes a day I have to fight those retards no problem for me….

Can be done they just have to take all the familymembers to.

Andreas Mikkelsen
Reply to  MADE MAKER

Ow wow, ISIS was hiding out in lava land. Time for SAA “operation volcano”. Start with some thermobarics and WP, just to keep them warm at night. :)

Exactly, destroy the rats! No evacuation for ISIS!

A bit late, the US has been flying them to Iraq.

I’d like to know more information about this pocket since we hadn’t heard anything about it before some news on yesterday. If South Front or some guy were able to provide some information for us, I’d appreciate it

You think you will extinguish their efforts, you think they will cease to exist? Never!

Let the remnants of ISIS roam the desert and be food for the vultures. Of course that might be considered cruelty to animals by some. The vultures may puke. :D

A few news outlet maps showed ISIS as having a presence that area. I go by Wikipedia’s interactive map that shows who’s holding the towns, villages and strategic hilltops. It hasn’t shown ISIS holding anything there for quite awhile so assumed there were some ISIS units holed up in little scatted hamlets.

Thats a sharia my friends, law by God, not by a people. Learn about Islam from real muslim scholars not from non-muslims. https://youtu.be/LSPXpzqrP8o

This isn’t Sharia, it’s US imperialism using Islam as a fig leaf, just like their zionist proxies who use Judaism as a pretext for their crimes against humanity.

Perfect explanation. I hope there are many intelligent muslims who be able to understand this, they have been used by Israel-USA-NATO to destroy their own countries (traitors) or other countries (mercenaries).

Me too, that’s why I want to encourage reconciliation, except for the foullest criminals. Cooks, clerks and bottle washers need to admit their part, say they’re sorry and go home, older and wiser.

i’m not your friend.

You showed that shit a thousand times… may your brothers burn in Hell….and you too for spreading their shit….may all headchoppers be chopped up

Allah is God you dumbass.

allah is muzzy god, not my God you dumbass :D

ALLAH is the god of christians???? can i get the number of your drug dealer…man that sure must be some bad ass drug u just took lololol

Allah is an Arabic word with the meaning of – God. Daesh shows why it is sinful to take His name in vein.

allah was the blowjobber of mohammed…didnt u knw that??? his sister, 3years old, was analized by him too…….lol….funny how u moslem moral degenerate humans see history and religion…by the way….if u pricks didnt have oil or gas…..

WE WOULD NOT HAVE THIS CONVERSATION ON OUR PLANET, cause u allah blowhjobbers would still live in caves , like 1 million years agon.pathetic moslem race…..LOLOLOLOLOLOL

Lol. Israeli intelligence running Sharia Law in the early days of the attack on Syria trying to brutalise the population. Most Syrians hated them. You lost. Tens of thousands of fake takfiris jihadist immigrants are worm food for Israel. Street executions are not happening anymore in Syria, because the wahhabi crazies are beaten and almost completely ousted. You are ridiculous tools of israel, and Israel too despises you. They just use you. Then they throw to the garbage heap. Have a nice life, but do wake up from being a stooge for the Israeli intelligence agency (that is very unintelligent). Lol.

You do understand that Allah means God? Silly me of course you don’t.

God means God, Allah is a piece of shit

Isis has been surrounded in the middle of nowhere where almost no civilians to use as human shields and little resupply. They’re stretched thin with few hopes of reinforcements. They’re extremely vulnerable and unlikely to hold out long.

why you think uk/usrael has a fit, watching their mercenary army decimated? The good part this useless pieces of shit have cost west more they can afford.