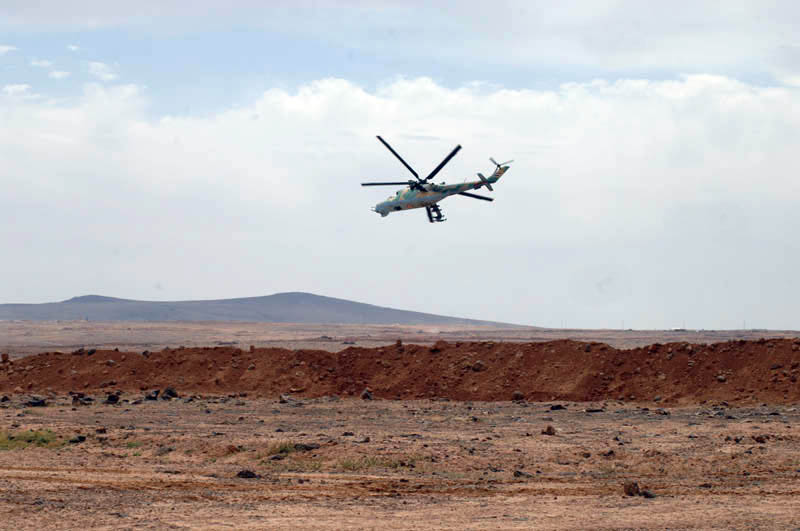 The Syrian Arab Army (SAA) and the National Defense Forces (NDF) launched a new large-scale combing operation in the desert area between Raqqa, Homs and Deir Ezzor on April 16.

According to an official press release of the NDF media wing, the Syrian Arab Air Force (SyAAF) is supporting the new operation.

In the course of the operation, the Syrian military will chase ISIS cells, destroy terrorist hideouts and remove mines and improvised-explosive devices (IEDs), which might have been planted by the terrorist group.

The new operation came after a series of deadly attacks that targeted personnel of the SAA and its allies. In the last two weeks, ISIS cells killed ten fighters of the al-Quds Brigade and four of the NDF in two separate attacks around the desert.

Hundreds of highly-experienced, well-armed ISIS fighters are reportedly hiding in the Homs desert. A recent report even suggested that the terrorist group’s leader, Abu Bakr Al-Baghdadi, may be hiding there.

The new combing operation could limit ISIS’ activities around the desert. However, only a real offensive would end the terrorist group presence there.

about time what? Is not like they dont know where the terrorist are. Flying few helicopters around for few days does not solve the problem just waste re sources.

It’s more than just flying helicopters around though isn’t it? Unless I misread the article! Also, they must have some idea where they are even if it’s a rough one. Otherwise, as you say, it would be a complete waste of resources, especially trying to cover an area that size.

the article can say what ever they want to pass as news. But is not what is happening on the ground.

Sometimes, give your negativity a rest will you ?.

you confuse truth with negativity . You are not very well informed maybe of syrian realities and what is going on backstage within the decision makers the last 6 months and who are they, are u. So stop assuming what I say is negative because it is not.

SAA has been stopped doing anything of substance because it will no longer suit the ones who allegedly saved them, so think again before judging also be informed correctly.

Understood. Just chill a little, I am on your side.

Even SF admits (and said so often in last days) thath is is only a small limited Op. More for propaganda and moral of troops and people than a solution. Because of Idllib, SAA can not attack and finish off the Jihadis there, but also can not move those troops from Idlib to the desert because the Jihadis and their master Erdogan would use this chance..

It would be hilarious if saa were to be swallowed up in AlBayda in Homs, because it would imply a Shia Hadith in isis’ favor.

Already two have seemed to have happened in Syria very recently, like days.

Look at you, on your foster Mother’s computer !!. Tosser.

But a Jihadi loving Japanese that loves Erdogan can be trusted? You can not even trust your own mind..

Ive been to Turkey and Iran so I know exactly what Im talking about unlike many posers on this forum.

Truce and start again on a better footing ?.

Sure, but I seriously dont trust any westerners, us can euro or auzzie, even if they say theyre Christian or Muslim.

I only trust Axis countries.

Well that is a new one on me. If it is any consolation, I live on the border with the big European one.

If now, fair play because I do not really care.

I can take that for as Axis. Maybe Russian.

And actually I have an idea for that Area that both Russians and Muslims dont mind going into that area to push out the west.

and you do sound like a two year old. It must be very hard for you, trying to pretend you are a grown up.

Whats the matter ? You got your ass served by me just a few minutes ago and you are trying the same lame act with others ? Is this your life ?Is this what you do ? Little keyboard warrior with the timy winny ?

you will not last long here if you start what all of you shit heads been doing and still do on the greek forums.

Who the fck made you the police of the blog d[]ck head ? And I v seen you on the Greek forums too and in fact on the ‘pronews’ blog that I mentioned above, the facsist-racist-right wing religious one. So why dont you stfu and dont try to take the high road with me !

Hah it seems im not the only one thay thinks your a fucking dink.

Oh you found your mate now ? One d{}ckhead finds another hoorey !

Of course the Kurds fought the hardest against isis than anyone else, everybody in the world knows that u dumb fk !

RETARD none make me police and take your shit else where. We dont want your low level in a clean site as this one. As to where I went to see what is what it is not your business. And fuck face is the one who did not jerk you off SOB.

You say nobody is made u the police and then next sentence you start with ‘We’ … Only ret@rded douch3bags repeat the same mistakes again and again… And hahahah ‘low level’ haaaaahahahahah yeah, you are the one who lifts the site to glory ! hahahahahaaaaaa

I dont argue with retards and low level as your self kalamarouin. Go back to the shit places you post in greece and stop trying to play smart ass here. Now kindly fuck off you not worth my time or energy.

I dont know and / or give a flying fck who you argue with douchyface! But let me remind you that you commented first under my comment !

Again, you seem to forget what you wrote a few comments up…go see a doctor you may have alzheimer’s …either that or your retardness has reached the critical point of no return. There is only one fooked up moron here who is trying to play smartass and that is you. I m returning your kindly last line of your shity comment and a bit more on top. Go suck a big fat long sausage, use all your precious energy on that. D0uchface!

go fuck your self kid.

Yeah…thats the kind of comments the blog needs … You bring quality to the blog …keep it up !

You are making your mother proud !

are you trying not show us how much of a retard you are kid? You dont have the capacity to ever understand what or how I think.

Im GenX, and youre probably a Zoomer

nope you just an idiotic hasbara.

Yes, I dont live in jewmerica you jewmericuck.

I dont even vote you cuck.

you dont need to live in America to be a hasbara. All you need to be one is your mentality.

Come to Iran and Turkey then, and join Axis, instead of living in americuck.

I dont live in america how you got that stupid idea? try and land on mother earth and stop giving advice as how someone need to live or do and out first your life in order. To me you sound like a complete moron who dont know where its ass from second base is and a very low intelligence person very confused.

Come to Iran or Turkey, take your pick, Sunni or Shia, or we can make you pay jizya.

Ive debated hasbara for more than 10 years, as well as every type. You antizio, yet living in the heart of zioland (america europe).

have you now. Well i did not debate you as is no issue to debate just stated a fact that you are what you claim to be debating. I guess when you dip your self in a barrel of shit always something long lasting also stick on you.

“…A recent report even suggested that the terrorist group’s leader, Abu Bakr Al-Baghdadi, may be hiding there…”

Wasn’t he also reportedly killed six or seven times, already? This guy must be a vampire – he just won’t stay down. On the other hand, he couldn’t possibly be a vampire. He was sitting on the beach in Tel Aviv a week ago sipping a Pina Colada with his Mossad buddies. Except instead of a little decorative pink umbrella in his glass, Baghdadi had a little ISIS flag. Netanyahu came down and started yelling at of them get off the beach and go vote for him a couple more times. Baghdadi refused, ordered another Jihad Colada and continued searching for infidel crabs to behead. Snackbar!

Sleeping terrorists cells have been trying to wake up sleeping SAA army. This is not a waking up, it is just re-ordenation to have a better sleep.

There are two Hadith that imply Baghdadi is Mahdi(as), or that at least Imam Al-Mahdi considers(as) isis as part of his, despite their premptive Khilafah.

So its funny how hard saa try to end isis (but realistically they will always be around, and their end could only happen with an agreed absorbtion back into AlQaeda.

Their end.will come once the west stops supporting salafist thugs for their own meager political gains.

All the other stuff is bs to.hide this very fact.

A good day to you.

helicopter sweeps is how this should have been done in the first place!