The Syrian Arab Army (SAA) has killed an Indonesian terrorist during clashes with radical militants in the northern Hama countryside, Syrian pro-government activists revealed on January 18.

According to the activists, the terrorist, who is known by his nom de guerre “Abu Mujahid al-Andunisi,” was a member Hay’at Tahrir al-Sham (HTS) special forces. This unit is responsible for several recent violations of the Russian-Turkish demilitarized zone agreement. 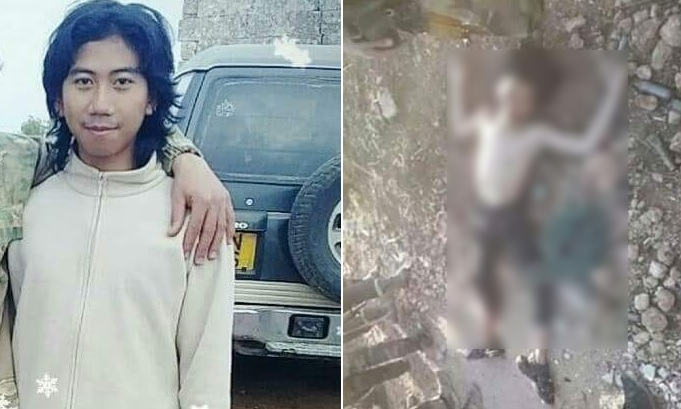 Last week, the SAA repelled an attack by HTS’ special forces on its positions south of the opposition-held town of Kafr Zita in northern Hama. Most of the attackers were reported killed by the army.

The presence of foreign fighters in the ranks of HTS is a clear evidence that the radical group didn’t abandoned the ideology of al-Qaeda as it claimed two years ago. This pose a serious threat to the entire region, especially that HTS is now in control of a large part of northwestern Syria.

After the apparent failure of the demilitarized zone agreement, the Damascus government and its allies are now reportedly considering a military solution to address the HTS threat.

I hope that 72-old virgin with syphilis and hanging tits is waiting for you you FILTHY SCUM !

You have come here to the foreign country fight against you brothers Syrian MUSLIMS for the interest of Zionists and CIA sponsored Al Qaeda that is nothing but servant of US-Israeli interest you retarded fucking bastard !!!!

Absolutely well said. I appreciate you. These people are not fighting for their brothers but indeed fighting for US nationality.

A waste of life for a bad cause. Very disappointing.

Could we please stop waffling on about this failed “demilitarised zone agreement”…… it never worked from day 1. Now listen to me SAA and Hezbollah, get in and kick their arses, hopefully with SAA and Russian air support.

That will happen I am sure Al.

There are so many terror puppeteers changing allegiances within the US Coalition of Terror, that is difficult to keep up with events. :)

Most westerners don’t know that the US slaughtered a million Indonesians when Indonesia got friendly with Russia. Westerners like to pretend that we are the good guys, but our victims remember our crimes, and with the US having been on a bloody rampage since WWII, a tipping point is being reached, where the US has oppressed a lot more humans than it hasn’t. Eventually the family and loved ones of the victims will rise up kill the Americans and their European facilitators.

The US is didnt force Indonesia to take up Islam. That was their own idiocy.

There are millions “Abu Mujahid al-Andunisi,” in Indonesia . Wahabism is spreading very rapidly in Indoneisa now . Indonesia is the most potential “next syria” scenario .

you are right indonisia is curse land and is run by wahbhi devil worshipper. bcuz biggest population of muslim and has nothing good to save muslim against Zionist and US/Saudi who is killing muslim eveyday.

And with a population of over 250 million, Indonesia would keep the US arms prostitutes in luxury.

Look at the pic, notice the hand over his shoulder? Look at how clean the hand is, that’s not the hand of a fighter. If we got to see the full pic, I think we would see the face of his American trainer.

This man from my country, poor man waste life

Why do indos use Arab names and Arab religons?

Where is the self respect? They dont like their own culture? History? Relgions?

Why do Jews do the same ? They have done so for thousands of years.

Jews pre date arabs though? Islam is a rip off of a jewish religon.

1) His just change wante be arab people and take eat promises a Hts about heaven that 2) actualy we have 5 religion , what do you mean arab religion? 3) we have so many every each place have own culture history also religion but we just still dont self respect about it :(

You know Indonesia had the most tolerant moslem people compare to moslem in middle east where in Indonesia there are many moslem woman drive freely, wearing tight jeans, and even not wearing hijab at all unless when they praying, that never be happened in middle east country unless you want to get stoned

Its not just indonesia that has fallen for this Islamic trap. Though maybe one day they will wake up and go back to their own religons.

Dude was indo and wanted to be an arab?

where is the self respect in Indonesia? Why do they let Muslims control their country?

Use your own religions. Dont copy the sand pounders.

Round this b*stard and kill more of them dont let them escape, make idlib as killzone for this sh*t