The Syrian Arab Army (SAA) launched on November 14 what appears to be a limited ground operation in the Greater Idlib region.

According to pro-government sources, army units advanced from their positions in the southeastern Idlib countryside in the early morning with support from the Russian Aerospace Forces.

These units liberated the town of Luwaybidah and the nearby Khaznah Hill following clashes with al-Qaeda-affiliated Hay’at Tahrir al-Sham (HTS) and its Turkish-backed allies. 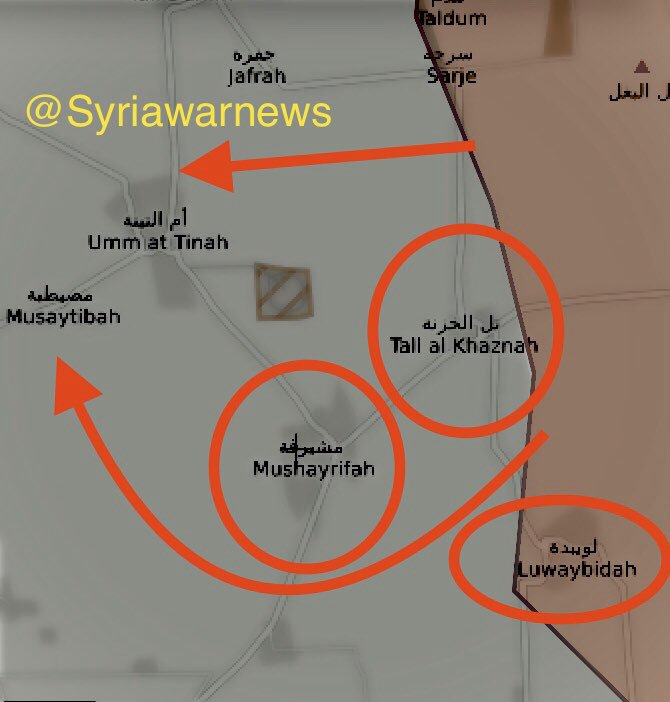 Heavy clashes are reportedly taking place in the outskirt of the town of Misherfah, which is being pounded by the SAA artillery.

HTS and its allies have been violating Greater Idlib ceasefire on a daily basis for months. The new ground operation is aimed at deterring these terrorist groups, or even completely neutralize them.

Good,no ceased fire this time. iblib must be retaken. A good deed to the world is being is underway,those terrorists need to be crush before the Turks give them a strong position where can do real damage to the west and the rest of the world.

unfortunately its a limited ground operation. Not the real deal big one. So gains will be limited. Who knows maybe SAA is preparing a simultaneous offensive on multiple fronts in Idlib like south, western, and eastern and maybe Western Aleppo to

Be sure to put “moderate turkish jihadi rebels” in quotation marks! These are full-fledged head-chopper murdering barbarians who should all be sent to eternal hell as quickly and efficiently as possible along with their CIA recruiters and Turkish support.

kill them all, and for gods sake … NO FUCKING CEASEFIRES anymore!!!! but I have my doubts…we will see in the next 72 Hours when SAA builds up Momentum….go SAA

Oh where is your Putin is Zionist traitor bullshit. Seriously get the fuck out you stupid Israeli troll.

Russia moving helicopters and AD systems into Qamishili airport.. Might even move a S300 up there..

first idlib priority one and then northeast and the sdf, pkk and the kurds – together with turkey they can clean out the ne in no time and that includes the more than dumb washington dc morons.

Ever wonder how the supposedly unsophisticated Houthi of Yemen can build sophisticated hi- tech short range range 200 mile missles and armed suicide drones that are quite accurate but Syria that has loads of Iranian, and Russian advisors, cannot and do not have domestic built ones? There are multiple surveillance satellites that Russia, and even Iranians that can read a newspaper flying over Syria continuously, and the bad guys televise and advertise on internet how and where they are running their areas, add that to Intel gathered from refugees who flee into Syrian held areas, means a 30 USD GPS or even cell phone, 150 USD laptop, 300 USD to manufacture newest explosive type munition package, aboard a 2000 USD to build missle or drone cannot be directed down the throats of bad guys and their equipment, including those oil trucks from Turkey. Houthi hit Saudi Air bases, and even Saudi/Kuwit oil storage and shipment facilities, and.and so darn it has only been US allies hot air B’S propaganda that claim Iran hit oil tankers, while Houthi jump for joy claiming they did it. How much more worth are lives of those well paid Turkish oil truck drivers than the tens even hundreds of Syrians whose lives have been ended all partially fueled by what those Turk trucks contain? Can lay odds that Russia, Turkey, Iran, Israel/ US and NATO all have data centers collecting not just on the ground battle field information but also to monitor and refine their weaponry and tactical use of them. They are not doing it for Syrian people but to fine tune, and profit domestic arms firms, each their own abilities for eventual possability they will be used against each other. It is said war is a serious buisness, be nice if Assad would get serious and ask for same abilities as is used by those rag tag Houthi malitia forces or will he realy just be satisfied being dependent upon Russia and Iran War gamers forever.

Joaquin
Reply to  Hide Behind

I share your view and I been wondering for long how is it possible that syria, a country that it’s not constantly been bombed is not producing almost anything locally, given the example of Yemen. I want to think that it’s due to some external presure and not due to incompetence in syrian leadership

Joaquin
Reply to  Hide Behind

Either way, Situation is getting better by the day

John
Reply to  Hide Behind

You want an answer okay. So. what are the tactic objectives? Pick a few places and let’s roll it out.

S Melanson
Reply to  Hide Behind

You make some very good points. Whether one agrees or not with what Hide Behind argues here, the comment shows good use of critical thinking which encourages debate. I would like to see more of this and less of trading insults.

SAA + RuAF are very experienced with that, so no problem there :)

And you should that the Russians you drug out canuck.

I guarantee Idlib will be another Vietnam for the Regime

Lol kike, haven’t you still realized how big your forehead is? Why don’t you just smash those SAA troops and block the routes of the Ruaf with your MASSIVE carrier size forehead?

Foreskin and benchpress, the people the white helmets call when they need to be rescued!!!

I guarantee that ISraHell needs to execute the Samson-Plan….

Where are the jungles in syria? And it cant be “vietnam” as its their country, the “vietnam” adjective is for foreign forces only.

Go play with benchpress some more, work on your material because holy fuck its bad, just as bad as patriot missile defense systems!

Here is why Idlib will NOT be a Vietnam for the ‘regime’.

Like the Houthis, the Vietnam War was a conflict between a foreign invader and an indigenous insurgency – National Liberation Front (NLF). Vietnam was about the people fighting for their homeland. The head choppers are a foreign backed proxy army that is unwelcome by the native Syrian population in Idlib.

Therefore, the situation in Idlib is the opposite of what is the basis for your reasoning – Idlib will be a Vietnam not for Assad, but for those that back the head-chopping proxy army. The SAA will resolve Idlib eventually because they have the support of the people.

Perhaps you should brush up on your historical facts to improve how you connect the past to the present. I do commend you for trying.

he’s just a troll for the squatters and as is now becoming very clear and worrying for the squatters, is that they are the losers in the war and are now surrounded by heavily armed and determined neighbours that will soon join forces to evict the squatters to kingdom come.

Agreed. I will engage trolls on occasion – In this case to reinforce in their minds how bad is the deteriorating security situation for Israel.

However, Hasbara Hunter mentions Samson Option in a post below and this is a concern in following through with evicting the squatters. If only there is a way that avoids such a scenario while setting right what is wrong…

Idlib will be Vietnam but for those who invaded Syria (Anglo-zio empire).

when will we see some Kalibrs start smashing Idlibistani primate rats? Cant wait :)

nah the kalibrs would be a waste of resources, they need to be saved for the assault on the illegal settlement called israel when the middle east finally decides to end 100 years of occupation and war crimes and crimes against humanity by the jews and send them packing into their next diaspora replete with gruesome pogroms.

Yes, they are best used against concentrations of rats, like Israeli airfields.

By cutting off the fuel supply to Idlib from Turkey, the conflict would be over in less than a year.

Napalm on Idlibistan would end the conflict before the end of this year….

No limted ground operation please. Just the full scale operation, but it seems like it’s just another small operation like the May offensive on Kafr Nabudah and Qalaat al-Madiq. When Russia won’t give the SAA green light for the large-scale operation, the liberation of Idlib might take up to 10 years.

Cut them some slack, the SAA is fighting on a shoestring, Syria has no money, Russia is spending a fortune there, it is insane to risk lives on skirmishes. The SAA has to organize what it has for coordinated assaults. They need to kill terrorists, not take heavy losses trying to get headlines. No one but Southfront says anything honest about Assad and the SAA and Russia anyway.

there is just one way to eat an elephant – a bite at a time! so have some faith in assad and russia and they are very systematic in the work to liberate syria from the unhinged states of A and the israeli squatters (that factually are the parties behind the syrian war) and once idlib is back in the fold as a fully liberated part of syria, they will deal with the northeast together with turkey since neither syria nor turkey ever will allow a kurdish statelet within the syrian border, sovereign or semi-sovereign is of no consequence. and once that has been made clear to the unhinged states of A, there will be no reason for them to hang on ad infinitum.

and disregard the bumps in the road and you will see the clear visions of russia in everything that happens in syria and erdogan knows which hand not to bite.