The Syrian army is developing an advance against the ISIS terrorist group west of the ancient city of Palmyra in the province of Homs.

Since last weekend, government forces have retaken from ISIS the Jihar junction and set a foothold for retaking the Jihar field and the village of Bir Marhitan east of the Tyas Airbase.

The Syrian military has also deployed fresh reinforcements (over 100 fighters) in order to increase offensive capabilities in the area.

Now, army troops, backed up by Syrian and Russian attack helicopters, are developing the advance in the direction of al-Baydhah along the Homs-Palmyra highway. I don’t get why Eastern Homs was not cleared by SAA a long time ago, that is how daesh is able to resupply and regroup. The area I am talking about is north-west of palmyra and south of the Salamiyah-Ithriya road. Clearly 1000 troops should be able to take it? Maybe even NDF with a little support from say Liwa al Quds?

Nothing’s that easy in this war. NDF and Liwa al Quds are militias, they can be counted on to guard their areas, or in cases of quality militias, accompany regular troops on an offensive. Liwa al Quds is not going to go off to fight ISIS in East Homs after fighting so long to secure their homes in Aleppo.
Think of NDF like the Sunni Awakening in Iraq a decade ago.

I understand your position, but who are you to lecture me on the workings of SAA? Aleppo is secured, Liwa al Quds were the key to securing the city. It’s a chess game and only a few moves left till check mate!

Aleppo was Liwa al Quds home territory. You’ll still be talking about check mate two years from now.
If I’m wrong, great! But experience tells me that even I am being optimistic.

Only time will tell mate

the SAA is a pretty lame army that owns its gains to the continued efforts of Russia and Iran. It´s not the Red Army (in terms of numbers, manpower, dedication and moral commitment to their mission). If I am not mistaken, there is an Iranian airbase near the pocket. Anyways, I would further suggest that the actitude and training of the average Syrian soldier is not exactly the highest. Since he is not promised a bunch of hot virgins, he will most likely avoid risky missions and suicide commands. And by the way, if Syrian army souldiers continue to pump oil into their arms to appear more intimidating (like this guy on the photo), there might be peace soon in the Middle East since all the oil will be gone. 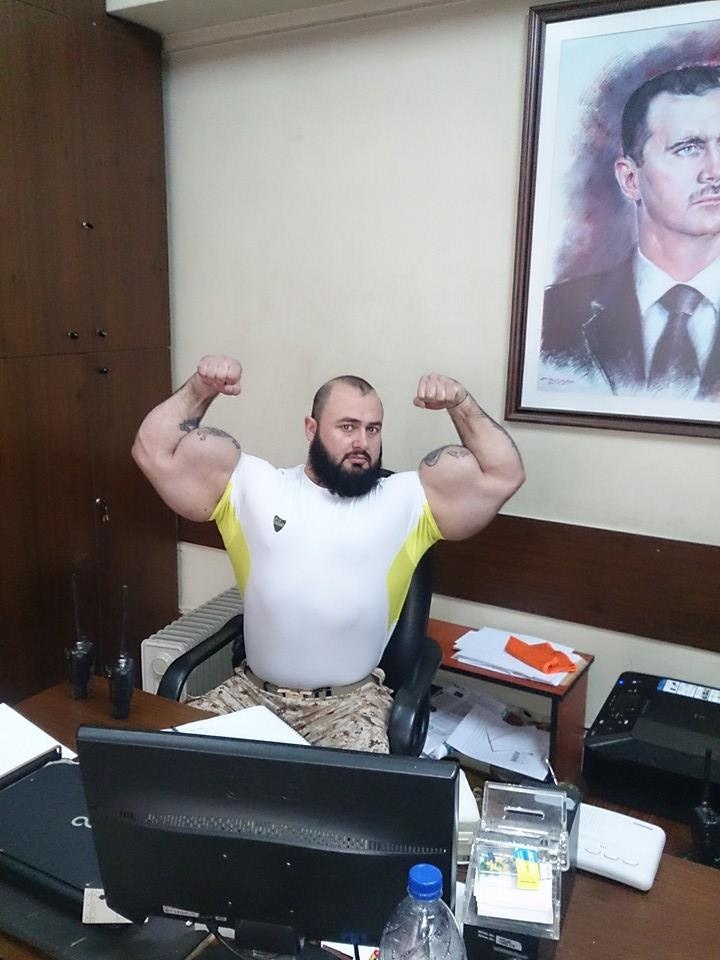 I think we should not worry anymore about the situation in Syria since this guy appeared to help out!, Forget about Rambo! He alone will clean Eastern Homs with his bare hands…

Taking palmyra is easier than holding it. Holding it requires taking Busairi crossroads. And it requires advancing east Salamiyah to jihar.

Patrolling these empty areas is the only way to prevent palmyra from being ambushed from Multiple directions again.

Also a good news! the corridor between Palmyra and Deir Ezzor should be closed as soon as possible

As it stands now, it is very likely that there will not be an SAA presence in DeiezZor within one or two weeks.

Really unbelievable that SAA lets the city being overrun.

Five months ago, I was referring to the need to maintain pressure on ISIS on the road that connects Palmyra and DeirEzZor, to take the Arak gas field, etc. That has not happened yet, but there have been other important advances. For some time when the pocket was split into two parts, it did not look that well for the SAA in DeirezZor and there was indeed a very likely possibility that the City could have been overrun by ISIS