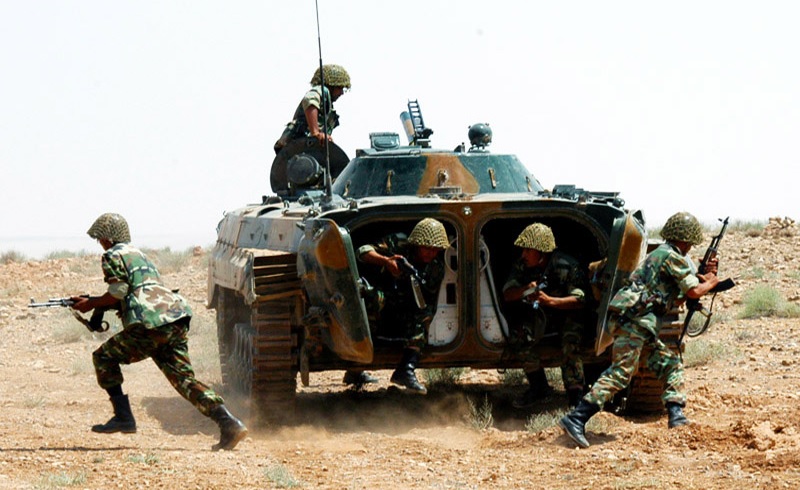 The Syrian Arab Army (SAA) and the Iraqi Popular Mobilization Units (PMU) launched a joint combing operation to secure the Syrian-Iraqi border on May 2, according to the al-Mayadeen TV.

The Lebanese TV reporter said that the SAA will secure the areas of al-Maizilah, Saad al-Wa’r, the T-2 station and the surrounding of the US-occupied area of al-Tanaf as a part of the joint operation.

On the Iraqi side, the PMU announced that four of its brigades will be deployed to secure the border strip as the SAA continues its operations inside Syrian territory.

“We are ready to stop any danger or emergency, if the terrorist took the roads towards Iraq as a result of the Syrian military operation,” the PMU said in a press release.

Last month, RT revealed that Iraq had prepared a new plan to secure its border with Syria in coordination with the Damascus government. The plan was seen as a part of the ongoing preparations to reopen the strategic Qa’im border crossing between Syria and Iraq.

The two countries are planning to reopen the Qa’im border crossing before the end of this year. A step that would allow Iran to ship supplies to its allies by land, which could provoke the US.

The US terrorists are on run.

Hey retard, still trying to find your Mummy ?. She isn’t here, fuck off.

The best joke I have read on the Internet, keep it up!

Thank you, I shall try.

Is that your best trolling effort? ‘Cause it’s really crap trolling. When did Vietcong ever have steel helmets, camo uniforms and drive BMP-1’s

Ok then it’s the ‘little green’

Cooperation between Syria and Iraq – something that UK/US/Israel are terrified to see.

Yes, they hate in fact all cooperation between people and prefer to set us against each other anywhere.

Wouldn’t it be nice if the SDF did the same thing and cooperated with the Iraqis too.

This will have no effect. The reason is because the Terrorist operating along the border area are US troops in US uniforms. Even Iran labeled them as Terrorist. They have been the terrorist the whole time since the early 1800’s. Until these units can identify what the Terrorist look like. They will fail totally. The US uniform is the uniform of a terrorist.