After a series of attacks on the city of al-Bukamal, ISIS has shifted their attention to a desert area east of the border city.

ISIS units have attacked positions of the Syrian Arab Army (SAA) and Hezbollah in the Humaymah-T2-Muazilah triangle. The most intense clashes have erupted near Humaymah and Muazilah.

However, all the ISIS attacks have been repelled.

The recently increased ISIS activity on the western bank of the Euphrates and in the Homs-Deir Ezzor desert contribute to claims by some Syrian expert that the US-led coalition still hopes to use the terrorist group as a tool against Syrian government forces. ISIS has no important facilities or even notable villages in its control near the government-held area, but it is fiercely attacking the SAA and its allies.

At the same time, there are many ISIS-held villages, even besieged, in the zone of responsibility of the US-led forces. But no major ISIS attacks are reported in the area. ISIS seem a bit desperate to get supplies now.
Time for SAA to burn their ass, or just let them roast in the desert. :D

Yes, it is difficult for the US Coalition of Terror to resupply their ISIS gangs as using coalition aircraft to do so is not really possible for obvious reasons.

In my opinion the recent ISIS infiltration into Suweida was intended to open up a smuggling route from the US base at Al Tanf to the ISIS cells in the Deir Ezzor desert.

You can color the map red all you want but you will never have full control of Syria again! :D

SF trying to speed up the war by coloring the map red. when in reality….ASs-ad lost all control of his country….

like, where?!
everything red is Assad control with few U.S. Jihad rats hiding in their holes to scared to breathe….but they will find them eventually…
they have killed other U.S. Jihad rats they will kill these as well….

and how US criminals are going to justify their presence in Syria since Kurds have no state and can’t invite US to stay in their name?

Shutup bitch, i bitchslapped you so hard yesterday you never responded. 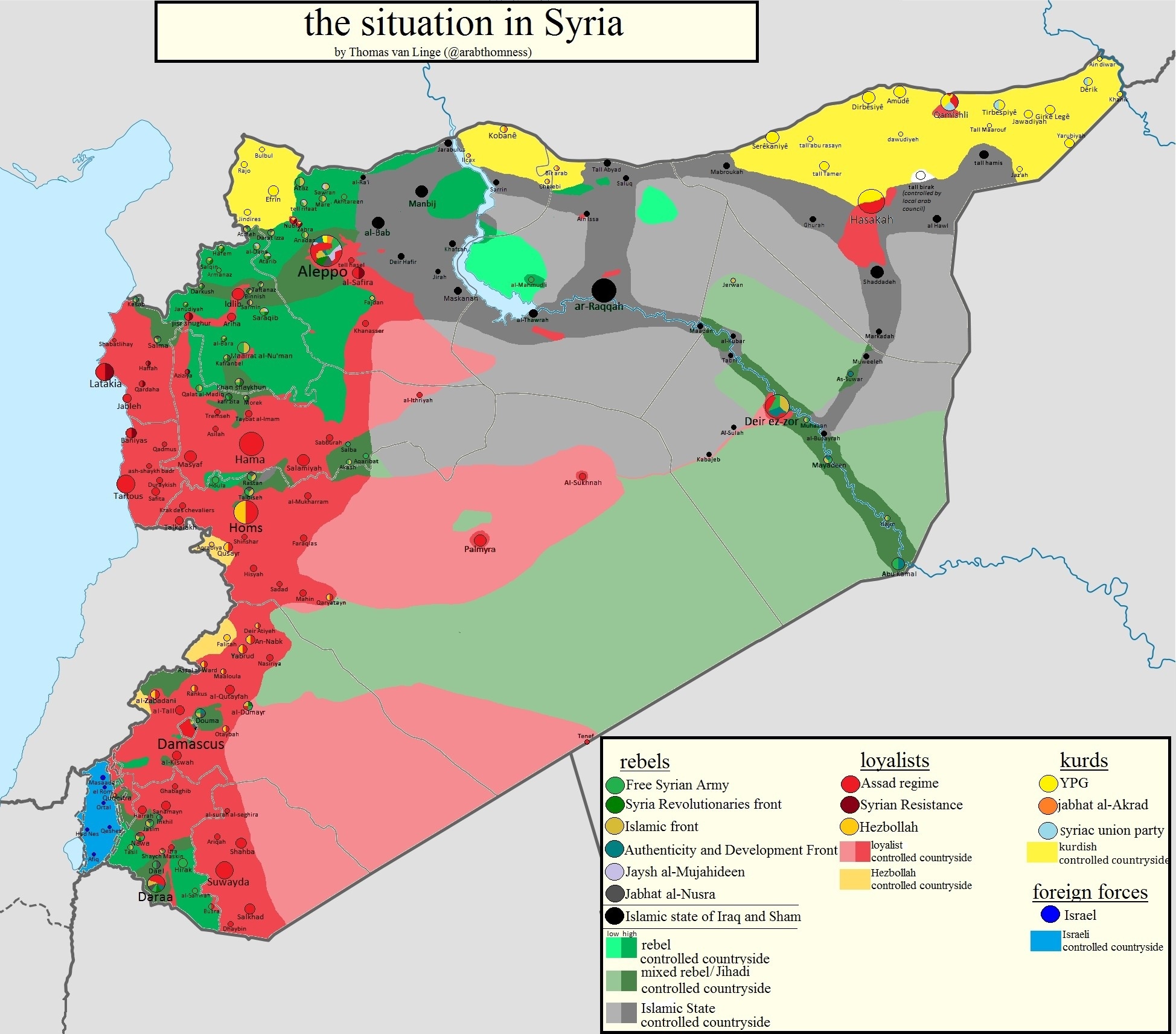 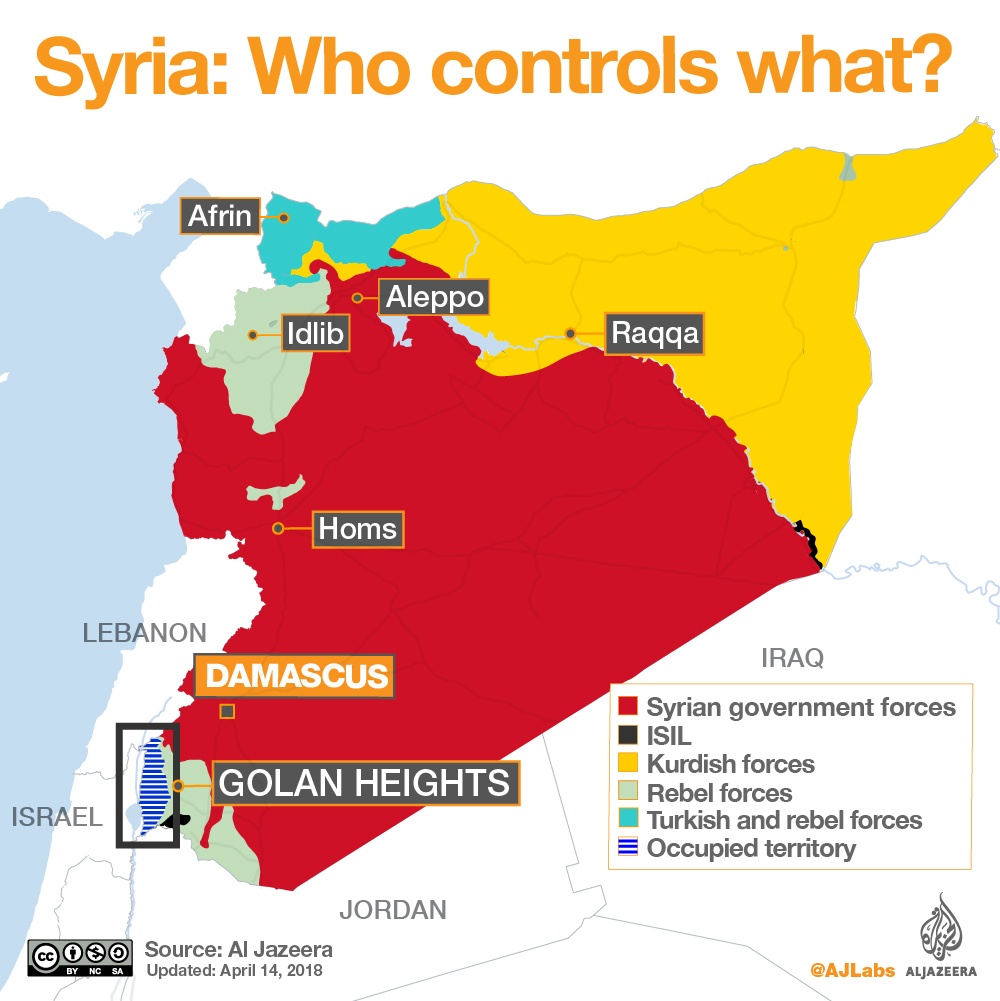 That is what the U.S. & IsraHell would like to see happen…they already Created Trouble in the Middle-East for a couple of Hundred years together with their French & British Partners in War-Crimes… perhaps Beachhead IsraHell should vanish too because it keeps creating troubles…toghether with the European-Import-Colonists…the Middle East is for Middle Eastern People to Govern…not for FUKUS….

How about saying the same thing about your “leader” Satanyahu….

These JIDF agents, like this “Joe Dirt” are so laughable now…. They come in and make complete idiots of themselves.

Don’t waste time on this dirty Jew, just block him.

look at syria today…just a brrainless human can write that syria will ever again control all of its territory.

Question n1. you think that turkey will just leave???they rae even changing the demographics in their occupied areas hence the syrian native population gets kicked out and the jew slave terrorists take over their homes.
Question2. you think that nato jew slaves(usa and france) will just leave all of their bases in syria(26 bases already)? what tf are u smoking
Question3. you think that satanic israel will ever give back the golan heights? seriously dude…this is all absurd to the highest level.

I wish too that syria will gain control over 100% of syrian territory and in doing that will kick ass of nato jew slaves and them satanic israelis.
but then again i wish i win the lottery and wake up tomorrow with a 20 yr, old supermodel.

All im asking is not to make a mockery out of this site…wishfull thinking and pipedreams is a NO-GO….its worthless just as me having a dream of a lottery win and a 20yr. old supermodel as girlfriend.
Stay serious…..please…thank you bro

peace , love and harmony……. but not for the satanic jews and their slaves including nato and saudi and gulf dictartorships

The next to disappear from the map will be naz-Israel.

it is a possibility with what is happening on the ground this days.

why?
how come they liberated the toughest, the most fortified areas like Aleppo and now they can’t
(in your opinion) kill some desert rats?!
and who is going to stop them?
your dirty mouth?

You can color your map black as you want but after the next Levant war, israel will be thoroughly evicted from the middle east for good :D

You where part of that movie weren’t you! you were the star his name is your name JOE DIRT. Parents abandon him because the little guy didn’t have much going for himself. Your right no one will ever have full control of you. Because of the fact there is little there that you can control. Thats why your parents abandon you.

seems like theyve been given orders by you-know-who to make trouble in this area again, since SAA is focused on the southern syria/daraa area, they wanna try to distract them, BUT STAY FOCUSED AND KEEP POUNDING DAESH INTO THE DIRT!!!

Still hopes to use terrorists……………. Have they ever stopped using terrorists? I think is time the people in southfront search and get educated what GLADIO was all about as well see the rename of it to blackwater and then isis and all the other names they given it.

It can be, Gladio as Al Qaeda or FSA, all fascist-jihadist stuff made in the USA.

No agreement on Al Tanf!

Arm Syria/Irak/Lebanon with S300- Pantsir’s – and all stuff needed to defeat NATO!

I’m pretty sure some Russian generals would agree, but NOT Putin!??

and you know what Putin think exactly how? Just curious

Who would not want optimal protection?

optimal protection means Syria to have the ability, to hit targets far away from her air space. By doing that she bring more harm to her than good. Try using your brain, not to answer me, but to think more than few seconds can you do that?

When you take an irrevocable action, it always has repercussions and a price to pay. Syria can take few hits of missiles she can even defend her self and shot back. She did that in the past. But she can not yet take preemptive action, not can she afford a war with usrael at this moment.

The strategy is free her own land before embarking in any sort of adventures that will for sure warranty she lost all gained up to this point. Russia went in Syria at the request of Assad to help control and defeat isis, not to fight syrians wars and they did that because it is in their best national interest.

The spirit you speak and thinking is too hollywood and I seen many here want Russia not only to behave but act also exactly as the moronic amerkans do. Well they be disappointed because Russians have brains and they use them, unlike the ones who beg for WW3 like they are living in another planet and it will not effect them same as every one else.

It’s Russia’s long term interest to have prosperous, well armed allies in ME, and so break US power.

Russia should aim for an outright full victory in ME, arm Lebanon, Iran,Irak and Syria with S300 or like

Prolonging the agony, will not work.

your take is to go head first and what ever comes, comes the american way and look where it got them, unless you too ignorant and have a 2 second thinking span, that will excuse your point of view, or your take, as you put it.

In the mean time thinking people the few who are left in this world prefer to do it the right way and not destroy what they try to save, in the process and following your take. If you object then talk to them not to me.

PA, you are just stumping lines, and not arguing anything.

Russia has defeated NATO in Syria. They can do anything they like.

argue about what? Play keyboard global strategist as you attempting to do in something you have absolute not control and power? Russia has defeated to an extent isis and stop few things from happening but is very far from defeating nato as they have yet to actually cross swords. When they do and we are still alive to see the result of that then I will also have an opinion.

In the mean time and since I have no control over what is happening and how is happening, i watch and learn from the moves each one does and evaluate how I can use that to the benefit of my territory where is my interest.

You feel free to dream your self like the new napoleon who know it all. You have my blessing.

Only a few, negotiated by US for home publicity were allowed to hit empty buildings! (See other Southfront articles).

If the US (Pompeo, Bolton, Mattis) could, they would have destroyed all Syrian airfields and Assad’s palaces.

The only thing Russia needs todo next time, is to sink a US destroyer or aircraft carrier to signal end of war options for NATO!

Anybody saying the US media and US congress are not already over-reacting on Russia and that could be worse is not informed about the current US congress sanctions.

you assuming too many things and saying even more. If is a lot into your thinking, only difference, is you not thinking. Try to drop this hollywood mentality you have and before you offer solutions learn to think and measure events correctly as well conclude in reality and not well wishing that only exist in your mind.

And if russia wanted to start WW# would have done a long time ago. And stop assuming what others know, as you obviously know nothing. Also how can someone miss what the sanctions are when are published in mass media as well all over the net? As I said learn to think before trying to be a couch strategist that think knows, what others dont. Especially common knowledge.

Russia should send weapons to lSlS and kick Americas and Israeli ass.

Not ISIS, but Syria, Lebanon and Irak.

That’s what Russia is doing. Clearly dumping a bunch of troops in a war zone and throwing guns all around clearly don’t work, check Libya Afghanistan Iraq? Did that work?

The main goal is to prevent the crazies from starting ww3.

Who are the crazies?
Israel – and AIPAC’s USA.

Only Russian-Jewish Billionaires do not want that.

italy is joing nato forces in deir e zoor area…stationed at us base near omar oil field deir e zoor.

next fucking pricks………unfuckingbelievable…..i´d definetly attack those pricks first with some missles, as a message at the very least…i mean whats next? luxemburg or netherlands sending troops.
Fucking jew satanic slaves.
disgrace for all europeans those italian jew ass lickers

With Italians in Omar, victory is assured!!! For the SAA that is to say.

Few things, ISIS isn’t one organization, they’re to broken up to coordinate. So an assault in the Homs sector does not mean anything elsewhere.
I’m sure the shortage of water in the desert is what got ISIS to withdraw to their bases.
SF keeps saying ‘attacks were repelled,’ but that assumes every attack was an attempt to take territory. Given the nature of the front raids and probing attacks that search for an opportunity to seize water resourses are effective. Although given that ISIS failed to do so was a SAA success.

the USA Military are effectively working for the Rothschild International Mafia Crime Family.; They hate Iran and Syria and Venezuela over their non compliant Leaders who are not servile GOYIMS AS THEY WISH; Both USA and ISIS and KURDS assets of the RIMCF will not let go of Syria’s oil that easy!! Watch this space.