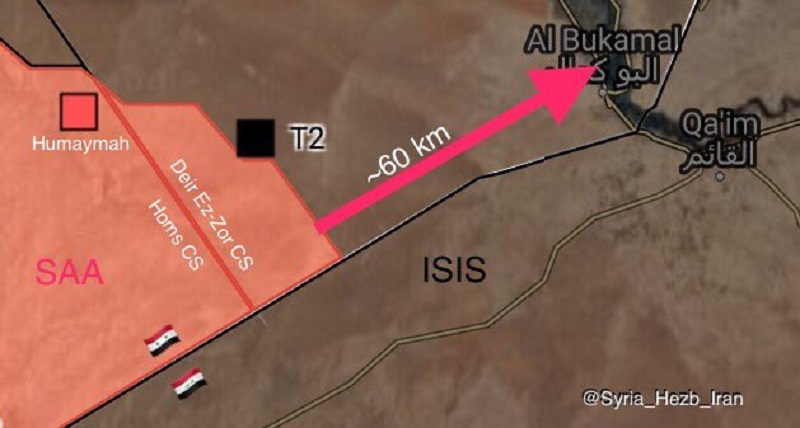 On Saturday, the Syrian Arab Army (SAA) and Hezbollah launched a large-scale anti-ISIS operation to reach al-Bukamal city at the Syrian-Iraqi border.

The Hezbollah media wing in Syria announced that the operation will be named “By The Dawn 3”.

According to the Hezbollah media wing, Liwa Fatemiyoun, Liwa Haydaryoun, Liwa al-Zainabyoun and the National Defense Forces (NDF) will participate in the operation that will be led by the SAA and Hezbollah.

Moreover, the Russian Air Force will back the operation, and provide a close air support.

So far, the SAA and Hezbollah and their allies have captured al-Rutimah and Ghizlaniah and the desert area north of Sharat al-Wa’ar village near the Syrian-Iraqi border. The SAA and its allies also reached the T-2 station 65km west of al-Bukamal city. 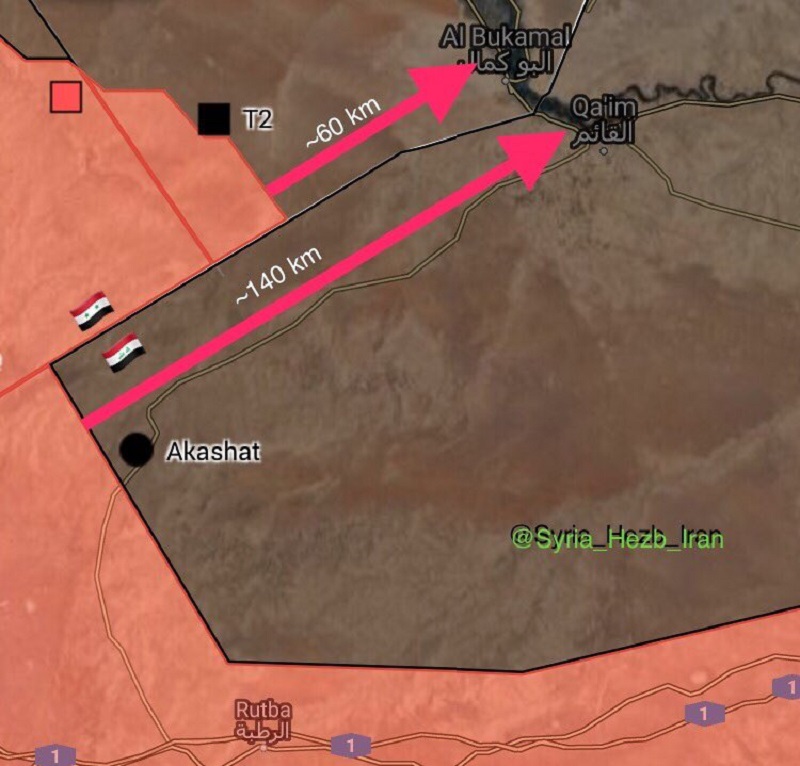 I wonder who’ll get there first? The SAA has a 80 km head start but the PMU are much faster at liberating, that is not to say that the SAA are slow

But now they have support from Hezbollah, known for their quick tactics in the desert. They also have Russian air support.

Iraqis are much slower then SAA, Even though SAA has a lot more fronts to care about.

They announced the operation to liberate Tal Afar in December last year lol, and only recently have they actually done it. They had besieging it for many many months before actually starting the attack…

Not that it is a race but id say the PMU have a lot more forces to draw from and SHOULDNT be bombed by the US airforce! Then again they are far behind the SAA! Whats more important is that they both do it! Its a big win!

GOOD NOW US THUGS WILL THINK 100 TIME S HOW TO GET TO BORDER FROM DIER ZOR. SDF/SLAVE AND US/ZIONIST WILL BE CONFUSE NOW.

The thing is they need this unity more than they think even under Saddam Iraq and Syria enjoyed an alliance of cooperation, just that the US wants to break any alliance in the Middle East not under their thumb.

Iraq should have focused on the border as this was more imperative as the pockets only benefited the US and Peshmerga bringing their optional plan to fruition to balkanize the region. Iraq and Syria will be busy securing their borders , as the US keeps having it’s foreign proxies back out of and into agreements and calling for truce negotiations. The Negotiators should declare that no more truces will be called until they make the offers and the Negotiators decide if they have come in earnest or just being false agents.

“under Saddam Iraq and Syria enjoyed an alliance of cooperation” utter bullshit!

So what? What you have said above is simply a local countercurrent. Syria and iraq in the main have been on side.

This must give chills to Israel….

ISIS spreading quite thin and the US-led terrorists plans in Syria blurring away even further, godspeed for the goverment-allied forces

Nothing makes the US more angry than coordinated operations between Iraq and Syria, specially if it involves Hezbollah and PMU. Haha!

On the side note, the operation’s name, “By the Down” or it’s Arabic (scripture) name, “Wal-Fajr” was also the name of at least 8 large scale operations during Iran-Iraq war (1980-88) done by Iranians against Saddam’s Iraq. History is curious… Now Iraq uses the same name in an operation in cooperation with Iran.

Nice I love when I see co-operation to crush Daesh, nice work keep up.

Hezbollah is like saving planet earth! Someone needs to make a kid’s Comic Book series about Hezbollah fighting evil!

That is the way Syria and Iraq must cooperate to destroy terrorism, despite USA intervention in both countries. The union of these forces will bring about serious concern to USA-Israel.

I just hope the combined operation works, and that they can seal the border.

It’s merely a romantic notion that Iraq and Syria will now come together against outside powers which have successfully manipulated Damascus and Baghdad since at least the end of the First World War.

I share (most) everyone’s sympathies toward Syria and Assad as victors in a war with an anti-Imperialist character. Much of the fight in any conflict is framing what the war was really about i.e. the sectarian Shia crescent narrative versus the anti-imperialist one. I’m afraid that Syria and Iraq aren’t showing much in the way of a special relationship that one would hope to see develop. Especially when it comes to both being victims of Anglo-American invasion, partition plans and finally Kurdish separatism as a force for more foreign insertion.

The reality about an SAA push to Al Bukamal is that it forces Iraq to do what they should have done long ago; if they were truly seeking serious cooperation in boarder controls. Sensibly, if the PMU’s don’t move to the Euphrates as the SAA does then Daesh will simply hop the line into Iraq without a fight.

However, I’m not one to be too hard on Iraq in this regard because one of the strongest American imperatives has been to keep Syria and Iraq separated. Going back to the Anglo-French division it’s pretty clear that a major imperative is to stop bilateral ties between nodes of power in what would naturally form only a few, if not one, nation state from the Levant to Mesopotamia.

After all iraq gov is still a us imposed one so can not act overly against us wishes.

Do you know how much petrol an tank uses, by the day, and let the army’s refuel at least, and restructure them self for future battles, and yea, the ISIS is spread out, and now diminishing rapidly.

I dont wanna whine about anything, since there is so far nothing to whine about, the next phase haven’t begun yet, that is what I gess is coming, and how will the imperial banana republic uISISa react to this, slapping of their proxy’s and merc army’s. In the western MSM, they drown us in sniveling drivel as always and watch the freak live from the bonkers bunker called the UN, witch have morphed to an full blown whore house, and does everything the insane uISISa wants them to do, never can I remember, thru all the shit the last decades have shown us all, an more rotten, pathetic servile UN, then the rotten stinking hep of spineless creeps, what we have now, its an cage of despicable creatures deprived totally of morale and justice. And lies all the time, about everything. And an Yankike president gone to lord knows where, and an MSM whom is pimping ww3, yeah, I see it growing exponentially this days thru their “ministry’s of THE truth” like YouTube and Facebook. I can almost smell it coming, the uISISa have spread their army’s all over Europa to make sure is they attack Russia will retaliate directly to any base anywhere in Europa, pulverized to oblivion, so to make them help the Yankikes to fight the “imperialistic Russians”, of course, but the Yankikes dont care, its their god dammed right to fight for making Amrikka Great again, and use the means it sees fit, done that for over 250 years, and I am accused of been an “conspiracy” nut. huh

And kicking China everywhere as we speak. In Europa, we have gone into the equivalence of the dark ages, where fascism was the rule and law, anyone threatening the hegemony is an heretic, and should be burn on an stake, the only difference is what camouflage they used, as now, The Vatican and some few others, whom controls the economy, is running the entire asylum.

Nothing have changed since.

Again, the Syrians and their allies, to Iraq is hopeful grown up to understand the common problem, and enemy, and to coordinate, to wider unification of all country’s fighting the beast. Do you understand, what is the meaning of the number of the beast, the simple truth, all wars are bankers wars, everything is bankers wars, every thing we see as an problem this days, is created by the banks, one ring to rule them all, and into darkness bind them. PS: Taken from Kalevala.

Brilliant, they are going South and the Iraqies are joining – perfect. This way they will be able to secure the border links between the two countries and push IS out of the Euphrates valley back up towards the SDF.

We are the SAA, we are the sons of the soil,

And, on the various battlefields we together toil

Whether we be Sunni/Palestinain/Hezbollah or Shia

We, the united SAA carry on the fight against Wahabhism terror!

Obomber ;The PEACE prize winner had his fangs on united Syria,

Starting the bombing 2012 till now in Deir Ezzor and environs of Raqqah!

Of divisions and creating enemies where neighbours murder neighbours.

We are the Peoples champions entrusted by the elected government

To fight terrorism throughout the whole of Syria, with 100% commitment.

We remind ourselves, we are the warriors/the workers/ the friends/Liberators

Waging a just war against terrorism funded by the word’s rich one percenters!

When we hold our rocket launcher and aim at the well paid foreign terrorists,

And they die on the battlefield for the causes of the USA and Israhell militarists,

Expansionism, imperialism/Washingsteiners/Zionism and other such policies,

We feel proud to be active participants and victors in our government’s strategies!

There have been many massacres and murders/destruction in Syria

At the hands of all the foreign paid proxies and USA bombs of Obomber.

But fakestream/lamestream media and Liberals have remained silent!,

As if Syria is the aggressor/the destroyer/killers who must repent!

We are the Syrian sons of the soil and, we will go to any part of Syria,

We will not be deterred by threats/false claims/LIES and western propaganda!

We are the SAA government soldiers fighting for our country, our old Syria

We are the SAA, though our brothers die on the battlefield, we continue our fight

For the right to exists as s diverse, united country with victory always in our sight!

A poem for our SAA Warriors/heroes/Liberators!

I love you Cheryl ! from Argentina, keep it up !

Evidently the wannabe jihadis the U.S. was trying to train haven’t worked out so well. Maybe the U.S. – Israeli plan to destroy the Syrian government and dismember the nation of Syria is coming undone.