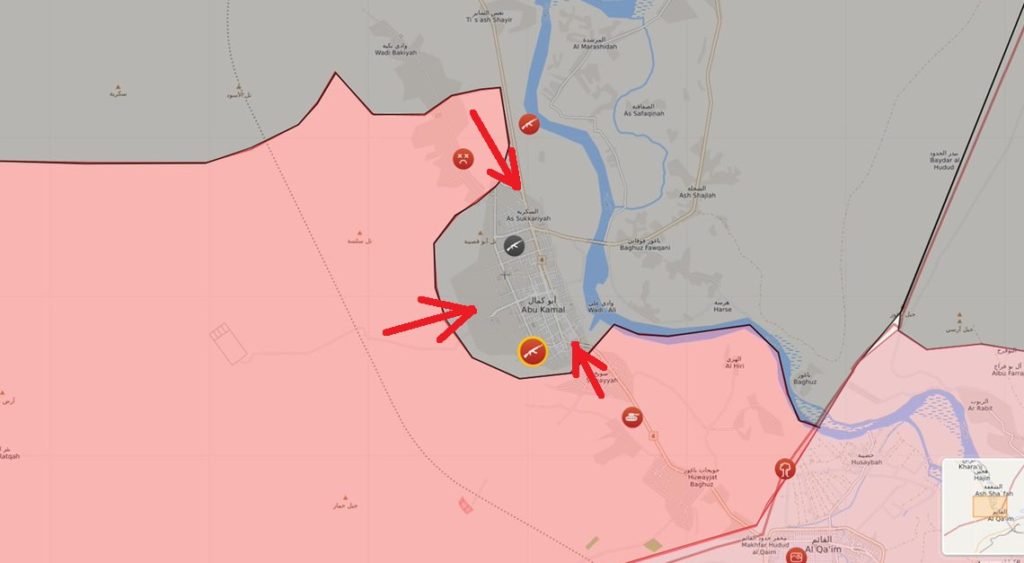 On November 16, the SAA, the IRGC and Hezbollah engaged ISIS members in the northwestern, western and southeastern parts of al-Bukamal. However, pro-government forces faced a strong resistance from ISIS.

On November 15, six Russian Tu-22M3 strategic bombers carried out a massive strike on ISIS targets near the border city of al-Bukamal.

Abu Kamal took too much time. Syrian army and their allies should have to secure the Maadine and Abu Kamal road first, so then the tiger forces from Maadine can also help to liberate Abu Kamal city.

All this shit happening is because tiger forces are busy capturing petty villages instead of a direct attack towards albukamal Last time they were sent to hama to capture petty villages and the kurds took advantage and progressed towards al omar oil fields now this Bet isis outnumbers SAA and it’s allies add the u.s help to them too reason they lost it

Hama is one of the major cities of Syria, that has been targeted again and again and again by Al Qaida and its Western backed headchoppers. The last two Hama offensives by Al Qaida were massive battles that had to be dealt with. In contrast nobody attacks the SDF on a similar scale, not even ISIS. The last time the Kurds were on a defensive battle of that scale was during the battle of Kobani in 2014.

And that’s assuming that the SAA was gunning for the Omar oil fields. Which I don’t think they were. Maybe they had the hope when they were still fighting to reach Deir Ezzor, but once the SDF decided to get involved in Deir Ezzor province strategic priorities shifted. The SAA still had to clear Deir Ezzor city, find a suitable crossing ground, establish and consolidate a beach head, build a bridge, then send in enough troops to break out against ISIS defenses. The SDF in contrast only had to move south and ISIS parted for them like the Red Sea for Moses.

Tigers are like a Syrian warlord army….which is very efficient vs much of the inconsistent SAA in the field. Syria has this problem of regional defence/National units who want to fight in majority, just their sector. Hezbollah and IRGC are more adaptable to field movement assignment. They do however have Shia enclaves and Mosque to protect. .. Why Assad has not been able to get 18 – 25 yrs trained up with 6-8 months Russian leadership is ?? with me. Assad has these in the 10s of 1000s, ….instead,…we see formations of over 35 to 50 and maybe older graduating after training. The tank crew and mechanized losses must be horrific, …brave men,vs ATGMs. I would not be surprised SAA tank and mechanized was destroyed 50% ,including everything Sent in from Russia since 2015. ISUS and FSA captured 500+ mechanized SAA over the war…which then by % is destroyed. Syria’s poor military logistic command shot themselves in the foot from the start of the war As Tanks and mechanized were overran at poorly defended and isolated garrison/bases ISUS had captured T 90 and Syrian T 72 with Bird Cage ATGM jammers just weeks ago.

Somebody in Syrian government is intentionally dividing the power strength of SAA and their allies. Their intention is to open so many fronts for SAA as many they can do to make SAA soldiers suffers a lot and defeated at all fronts. I do not know that who is that traitor.

There should be a stack of American ISIS dead if this manouvre pans.

Where are the helicopter gunships for close air support? Without air cover there will likely be high casualties for the Syrian government forces and their allies. The attack should involve a swarm of reconnaissance drones followed by at least a squadron of helicopter gunships eliminating all potential threats.

CAS by helicopters needs an airbase relative close by.

As they cannot use DeZ airbase due to failing security, it is doubtful there is a functioning and secure airbase nearby.

oh my lol, stay away from themes like distance and airbases.

There is none. Russians, in contrast to the Americans are unwilling to jeopardize their-very minimal-forces or build another airbase closer as they should have done more than a year ago, while Syria simply does not have the means.

Thats what I thought

Iran has US Sea Cobra helicopters with TOW, along with their own copy version with Iranian copy TOW. Could IRGC operate say 6 of these?. Helicopters and Airborne have been the Achilles heel of SAA and Iranian in this conflict.

The US actually encourages losses, plenty of unemployed in the US to replace the dead, and destroyed equipment is good for business. During WWII, the US sacrificed thousands of bombers and crew, to make Boeing the company it is today.

I had read that Russia was going to build a second airbase in DE , after it is more completely secured , is that plan gone ?

No idea but it seems so..

As Icarus Tanovic said , its still a plan , but a wider buffer zone . It would seem to be key to a real control of the oil fields and the border with Iraq.

who said there aren’t attack helicopters?

bottom line: nobody gives a f*ck about the USAF “hindering” airspaces. If they are so into supporting ISIS then let them do what they gonna do.

Armchair corporals are nearly as abundant on this site as zionist trolls.

“who said there aren’t attack helicopters?”

Probably because the first time the city was briefly ” liberated” there was no Russian air support.Before making fan of fellow commenters some of you guys really need to do more research…

and you really need to stop assuming things when you can’t expect news to be accurate, especially when you don’t got much clues of what you’re talking about.

but it’s so plain in sight that the above assumption is damaging in either way. so do the world a favor and throw yourself in a cliff.

You cannot stand people disagreeing with you ..can you?? You sound like a 6 year old.You really need to glow up..

you really are out of the topic.

Information is inaccurate and lacking because nobody is going to tell you what is happening on the terrain, at least until it’s over.

secondarily, i can manage those that dont think like me, those i can’t stand are the trolls hiding their slimy propaganda in carefully prepared packets, or making hidden suggestions to elicit some doubts in reader’s mind.

want me to point these features out at every post i see? because at that point what would come out is that 90% of the comments are not written by “ordinary folks”.

Andit isn’t over until is over.

You can call me Al
Reply to  Turbofan

You are reading a report – if it was 100% true, the enemy would gain all the information they need, wouldn’t they.

We are being given some, not all the info, so maybe it is you that should consider and understand that.

The US has given ISIS anti aircraft missiles.

be quick…the virgins are waiting for the brave martyrs….

it was going to happen sooner or later…..i blame Putin for that…..huge demand ….

Come on with no air support you are dead!

This may take a while. The reason is simple: it is the final battle for Daesh and they will put up quite a resistance. From SAA pov Daesh is on its last legs, who’d want to die at the end as a needless sacrifice when the rats are nearly dead. This may mean that SAA and allies will contain them and keep destroying ammo stores. Eventually they will run out – job done.

The US will keep supplying ISIS for as long as possible of course.

And that is why the east bank must be taken , it is too easy to resupply from there . I was hoping the Iraqi PMU would be on this as they have already crossed the river just over the border .

The should cross the Euphrates, take over the bridge and completely encircle the US terrorists.

The participation of the IRGC in significant numbers is certainly a welcome addition to Syrian government coalition clear and hold operations. It bodes well for the overall long term success of the war and sends a strong signal to the regime change backers that the Syrian government coalition has both the qualitative and quantitative resources to the see the war through to a successful conclusion. Including dealing with the Jew causal factor of all of the trouble.