The Syrian Army and the National Defense Forces (NDF) renewed a push against ISIS terrorists in the area southwest of the Kweires Airbase in the Syrian province of Aleppo. So far, they liberated Mansourah, Khirbat Jahish and  Zabihah.

The goal of the advance is to expand a buffer zone along roads heading to al-Bab. Strategically this could be aimed on flanking Deir Hafer from the north.

Meanwhile, Turkey’s President Recep Erdogan anounced that the Tuurkish Armed Forcec will continue operation in Syria until the liberation of the ISIS self-proclaimed capital of Raqqah. Erdogan also confirmed that the Turkish army directly participates in clashes against ISIS in al-Bab along with the so-called “Free Syrian Army”.

In al-Bab, the Turkish army and the FSA seized the northern and southern entrances into the town.

The town Qabasin remains under the ISIS control. The village of Bzaah is contested. 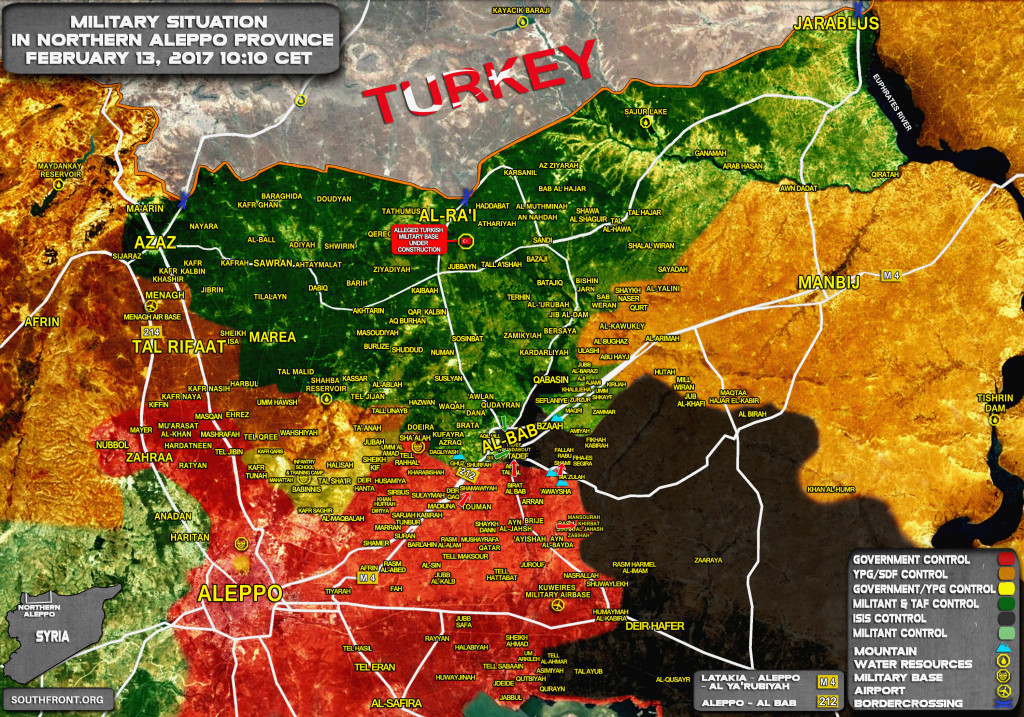 Unless he’s going to advance through Kurdish held territory it will be a very narrow corridor advance to Raqqa. Also a long distance. And the Turks with their FSA headchoppers took like forever to cross the short distance to Al Bab. Which by the way still hasn’t fallen yet. And if you look at Manbij and Mosul if ISIS wants to defend a city it will take a very long time to take that city from them.

Meanwhile the Kurds and SDF allies are only 10km from Raqqa…..

I’m starting suspect that Erdogan is being subjected to the same toxic fumes in his gold plated palace as Hitler was in his underground Berlin bunker. It seems to deliver the same type of ridiculous delusions in regards to military and political decisions

Much might depend on what happens if the SAA manages to advance east far enough to make contact with the Rojava Kurds. If that were to happen the Kurds would no longer be dependent on the Americans to be useful as the only force capable of taking on ISIS. They could finally start to play the Americans against the Russians as both sides would be in a position to supply them with weapons and air support.

Doubt that the Kurds can take Raqqa since the US are in collusion with ISIS, well known fact.

I’ve never put much stock in that kind of conspiracy thinking. Yes, the US has used ISIS indirectly in the past to strike at Assad, and probably turned a blind eye to the Turks and Saudis funneling money and weapons to them for that purpose. They probably funneled intel to ISIS for that same purpose via their so called moderate rebel allies. Cause they all talk and exchange resources anyway. But so has Assad occasionally when he felt he could nudge ISIS in his favor. But actual direct contact, no way. The organization is too much of a loose cannon for that. Hell, the socalled moderate opposition is already too much of a loose cannon for the West to support.

He is not going to Raqqa.His next target is Efrin .Why not Raqqa.SAA is going to block his route to there,when they link with SDF.This is what SAA is doing.They are advancing east of Kuweires airport.

So , a full blown war between kurds and turkey will finally become reality. It’s like everyone is numb to the fact that Turkey IS IN syria atm and that IS an invasion and they have no plans of stopping at al bab. I dont know what fucked up game putin and erdogan and assad are playing there, but this situation of them sharing and compensating ground can’t be as friendly everywhere in syria like it currently is in al bab.

I read Erdogan’s statement not that he is going to Raqqa but simply Turkey is going to fight ISIS until the end (Raqqa’s fall). What other option does he have? Both Russia and the US want ISIS eliminated so unless he wants to go it alone, he has to help. The days of ISIS are numbered as everyone is attacking them. The big question is to see if President Trump agrees that to defeat ISIS he needs Hezbollah and Iran (which I believe is true).

Trump needs to eff off. Not his fight anymore. Why would trump want to destroy ISIS when they support them. Trumps’ rhetoric in regards to ISIS is just plain BS and propaganda.

Hmmm. What do you think the US is doing in Mosul and Raqqa? Not sure I agree with your assessment. We may need to disagree. :-)

Take a look at the Alastair Crooke article: https://southfront.org/syria-in-the-geo-political-waiting-room/ where Mr. Crooke states:

“This is the challenge. Can Moscow and Damascus create a new détente with Washington, and too, bring the new Administration to an understanding of the indispensability of Iran in ridding the region of extremist, jihadi armed movements? Perhaps Trump can agree to let Putin ‘manage’ this aspect of the ‘war’ in a separated ‘compartment’?”

and today’s TASS article on “Russia expects close anti-terror coordination with the US in Syria.” http://tass.com/politics/930549

notice where Foreign Minister Sergey Lavrov states: “The processes that are unfolding in Syria involve many participants: the Syrian parties [both the government and numerous opposition groups], Russia’s air force, Hezbollah which is supported by Iran, the U.S.-led coalition,” he said. … “The Russian top diplomat stressed that Moscow position is that “in practical terms those who are directly involved in the processes on the ground must coordinate their actions.” “It is applicable to the operation in al-Bab, to further developments in Manbij and Raqqa, and so forth,” Lavrov added.”

The Donald still wants ISIS destroyed. I have seen nothing from him that would say otherwise. The questions being asked now are what is the end game going to look like, and for the US especially Iran and Hezzbolah.

This article would explain a lot: http://www.pravdareport.com/opinion/columnists/04-02-2017/136783-trump_shut_up-0/ https://gowans.wordpress.com/2016/10/22/the-revolutionary-distemper-in-syria-that-wasnt/ Sorry about the delay, governed by a time zone.

You’re probably right, a month or two ago they made the absurd claim that they were going take Aleppo after Al Bab… Obviously that ain’t gonna happen. As for Raqqa… forget about it.

Frankly I don’t think Erdogan is genuinely interested in fighting ISIL, in fact it probably annoys him to still be fighting fellow Islamist’s in Al Bab (and failing) when he’d rather be fighting Kurds to the east.

Erdogan also wants to introduce a ‘safe and no fly zone’ covering 5000sq kilometres. If this is true then he should do it on Turkey territory not Syria which will be apposed by Assad and Russia, Iran. Looks like Erdogan is siding with the US who have same ambitions.