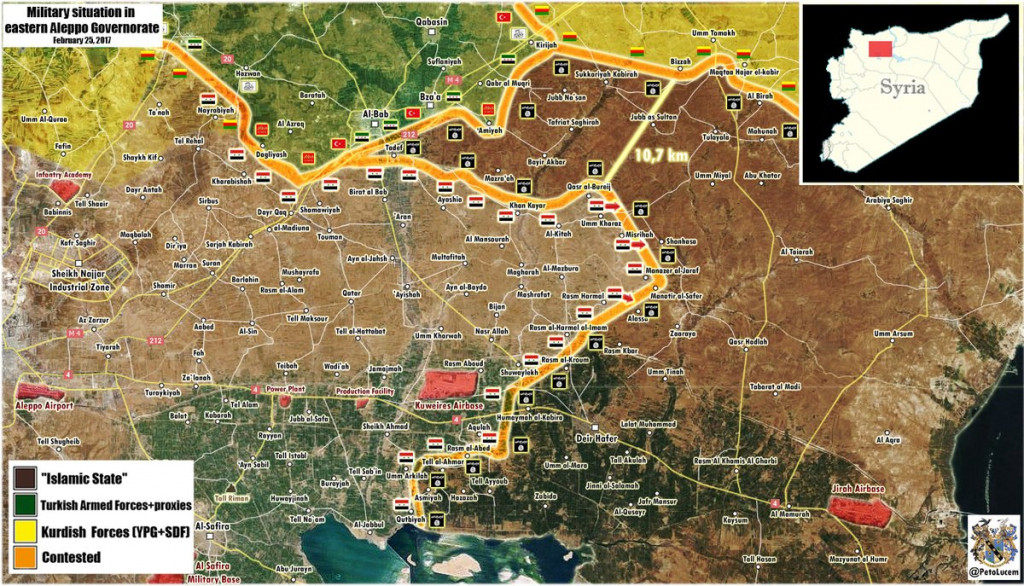 The Syrian Army’s Tiger Forces have been rapidly advancing against the ISIS terrorist group in the eastern part of the Aleppo province.

On February 25, the Tiger Forces liberated Abu Jabbar Kabeer, Al-Qeteh and Manazir Al-Jiraf from ISIS terrorists and deployed in about 11 km from the positions held by the US-backed Syrian Democratic Forces, predominantly Kurdish YPG units.

If pro-government forces reach SDF frontlines in Aleppo, they will phisically cut the Turkish army and its proxies off from any chances to advance in central Syria. At the same time, the government operation in the area pursues another goal – to isolate and to retake the important ISIS-held town of Deir Hafer.

SAA is taking back what was always theirs, inch by inch.

Syria belongs to the pople and not some mafiosas in Damaskus,

If you say so

People would feel more respeonse for it and not treat like that.

Turkey “captured” Al-Bab, Iraq will capture Mosul and the Kurds will capture Ar-Raqqah. Will Saudi Arabia then join the “fight” against ISIS and start a major and direct confrontation between Saudi Arabia allied to Turkey vs Syria, Kurds and Iraq(Iran)?

Empire would luv for Saudi and Iran to fight each other in Syria…more openly. They already fight each other via proxy in Syria. It keeps the Iran sponsors terrorism canard going in media. Empire can say Saudi are fighting terror. ..and when Saudi get killed in Syria, That Iran backs ISUS…

The sheeple in USA and England will drink that kool-aid.

Sausis are too small a player for that even rich compared to. Saudis has other problems. I think they cant.

Today the Tiger Forces liberated 10 villages.They are speeding up to block any possible Turkish blitz which I dont think it can happen anyway

i still believe that the US/Israel plan is, since the beginning, the balkanization of Middle East. After Iraq and Syria, its time to dismember Turkey as well pushing then against the Kurds.

I believe they will strengthen the Kurds in Syria and Iraq. In Syria, they will use the CIA controlled Kurdish area as a way to start war with the Syrian forces. They will claim Iranian backed forces are attacking the US “allies”. Then they will use the Kurds to agitate and commit terrorism in NW Iran. When Iran responds and defends itself, McCain and the neocons will make it look like Iran is “massacring” the peaceful Kurds. This is the angle they will use.

Yes….provocations to blame IRGC and Hezbollah. US will use the Democratic Forces of Syria label to hype the sheeple at home That Americans must fight for Syrian Democracy ….BS. ….

It won’t be long before CIA start taking Kurdish children for Elite pedophile Rings, This is the custom towards the subjugated.

With your ending about the pedophiles how do you expect that some one will take you seriously.

You gotta be kidding me…. England and US have huge Elite Pedophile Rings. There is at present the Pizza Gate Pedophile ring in USA getting outted. Goes all the way up the ladder to even Trump Admin. Part of the reason the US deep state is threatening Trump is to push his Admin off of prosecuting the lot of them.

So….you think CIA will not take Kurdish children …or stuff their region with drugs,guns And Of course….Pallets of cash. …just like Iraq.

I would argue that what you wrote about the Kurdish children is a particularly weak argument. And that there is no chance it can take place in a country like the United States or in any democratic country.

They also organ traffic. There was a report recently about thousands of Syrian children dying and having their organs taken and sold.

Where you involved in these trades? You must be a doctor.

Organ trafficking ,has been reported by the “Zinik’s” in east Aleppo before its liberation , which given the jihadist’s morals , I can believe . But the Kurdish , I can not believe would be involved in that type of action .

I meant Mossad/CIA and PMCs working with the Kurds.

Ha-ha. Pedofile dont ring and make noise. They use phones and internet and catch fish and birds by the nets too.

I don’t know Hellbozah trained kurdish fighters in the past hard to tell.

There are Kurds in Syria near Aleppo who fought with Palestinians and Hezbollah. The US will pressure the Kurds to not operate with Hezbollah. So….the Kurds in and near Aleppo have choices to make. Hezbollah operate primarily to the South West in Syria. Their forces operating elsewhere in Syria are similar to Tiger Forces, And just as good.

Brad, I wouldn’t be surprised if the Kurds on the Iraq/Iran border start skirmishes inside of Iran to get a war going.

A war to take barren landscape and a couple of hills? What about the Hormuz straight. Will this shut down oil shipments to the rest of the world from Iraq and Kuwait also. This is a major escalation in warfare against the world economy.

Since the beginning of the hostilities in 2011 the Kurds had excellent relations with the Syrian army. Except for one unfortunate incident. The interest of both sides and of Russia is to maintain good relations. And so be it.

Would not argue against you , but Luigi’s angle also has merit . They use the Kurdish to first stir things up in Turkey , they then have troops in eastern Turkey , and more Iranian border to play with .

You are confusing between the United States and Iran. And the Turks don’t need encouragement in their hostility to the Kurds.

You need something. What about a balcony ?

looks like a big gang bang from SAA and kurdish forces when erdogan tries to go big! Syria should ask the greek air force to help fighting terror! Its free Turkey shooting!

OK, give it another week. Besides, FSA and Turks are just sitting on their ass after ISUS pull out from Al Bab. AMN reported ISUS launched 8 VBIED’s against this SAA offensive within last day, and none of them got thru to target. This is a sign of desperation. Tigers all well trained, they know how to manage their front line.

All social media, from rebel, kurd to Assad report fierce fightin between rebels and Tiger Frce. Rebels report to have killed more than 30 Tiger Force. Nor clear who is winning.

We are missing here an important point ¿ Why did Russia allow Turky to invade Syria ? ¿ Why ?, do not tell me something foolish like “cooperation” against terrorists because all know that Turky has supported terrorists and has made bussines with oil with them.

>Why did Russia allow Turky to invade Syria ? Because Russia is weak and brittle, only able to play tough. Forcing Turkey to give up on an important plan is way over our head and doesn’t exactly fit state’s interests. If we took the punch for Syria directly it would cost us multiple times more and I doubt even syrians themself would like the results compared to current situation.