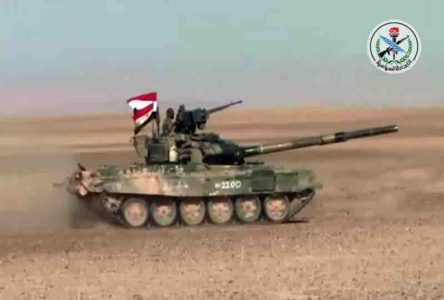 On February 6, the Syrian Arab Army (SAA), the Tiger Forces and the National Defense Forces (NDF) liberated 5 more villages from ISIS in the northeastern Hama pocket.

Engineering units are now working to clear the liberated areas from mines and IEDs.

The government advance in northeastern Hama is ongoing amid an intense fighting between the SAA and Hayat Tahrir al-Sham (formerly Jabhat al-Nusra, the Syrian branch of al-Qaeda) near the city of Abu al-Duhur in eastern Idlib. The terrorist group used the fact that the Tiger Forces and the SAA had redeployed some of its units from the Abu al-Duhur area for the northeastern Hama advance

They’l have this pocket cleared out completely in the near future at the rate that they’re going. At that point the war west of the river will be largely over with just areas on the Israeli, Turkish and Jordanian borders, and a few small interior pockets left to recover. And then they’l be in a much stronger position to shut down the Kurd’s Israelistan secession attempt east of the river.

Heard they already captured 50% of the pocket. From Al-Masdra today they captured 30-50 towns supposedly lets hope they keep this pace by next week they’ll finish it up

As soon as this pocket is coloured red: full force on Idlibistan!

I don’t know what the Syrian, Palestinian and Yemen foreign offices, journalists, students and protest organizers are doing. They are completely silent. They should show themselves in Washington, London, Paris, Moscow etc in all major cities and spread their voices to be heard in TV shows in conferences and debates. Governments cannot run like this. ————————————————————————————————————————————–