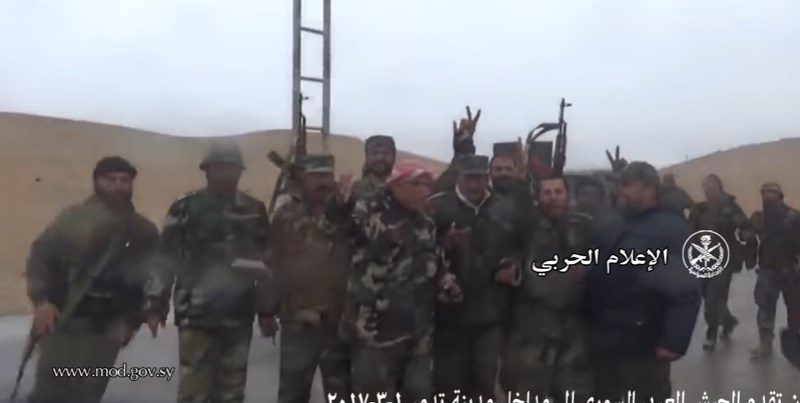 A screenshot from the Syrian Ministry of Defense’s video

Syrian army troops, backed up by Russian attack helicopters, have entered the orchards area of the ancient city of Palmyra.

Unconfirmed reports appear that ISIS units have set a high number of mines on roads in the area and now are withdrawing from the ancient city.

If confirmed, the second liberation of Palmyra from ISIS will become a major victory for the Syrian army and its allies.

Earlier, the army took full control over the mountains of al-Tar, Syriatell and Ishara northwest of the ancient city.

Videos show clashes in the area of Palmyra:

ISIS fighters have fled except for few but they have put mines everywhere.2 days more and the city will be liberated.Then SAA should expand its territory around the city.Meanwhile SDF have given villages to SAA

Will FSA attack those villages if they are now under SAA control, now they cant go to Manbij

They still can go to Manbij even if they dont fight SAA.They need to go through the river

Better defend it next time

congratulation to Syria army and Russia aerospace force. We all hope they do not make the stupidity of allowing terrorists to come again (russian intelligence and aerospace force are mainly risponsable for this).

Have to get to Deir Ezzor this time, the fronts are falling and Assad’s manpower issues are less now. Maintain the pressure in East Aleppo and increase intensity on the Homs-Hama border.