Syrian Arab Army (SAA) units advancing east of the town of Khan Shaykhun and west of the village of Tar’i met in the afternoon of August 21, effectively placing the remaining militants’ positions in northern Hama under a full siege.

The towns of al-Lataminah, Kafr Zita and Murak, which have been strongholds of Hay’at Tahrir al-Sham (HTS) and so-called Jaysh al-Izza for years, are all now under siege.

The Turkish observation post, located south of Murak, was also encircled by SAA units, according to pro-government sources. 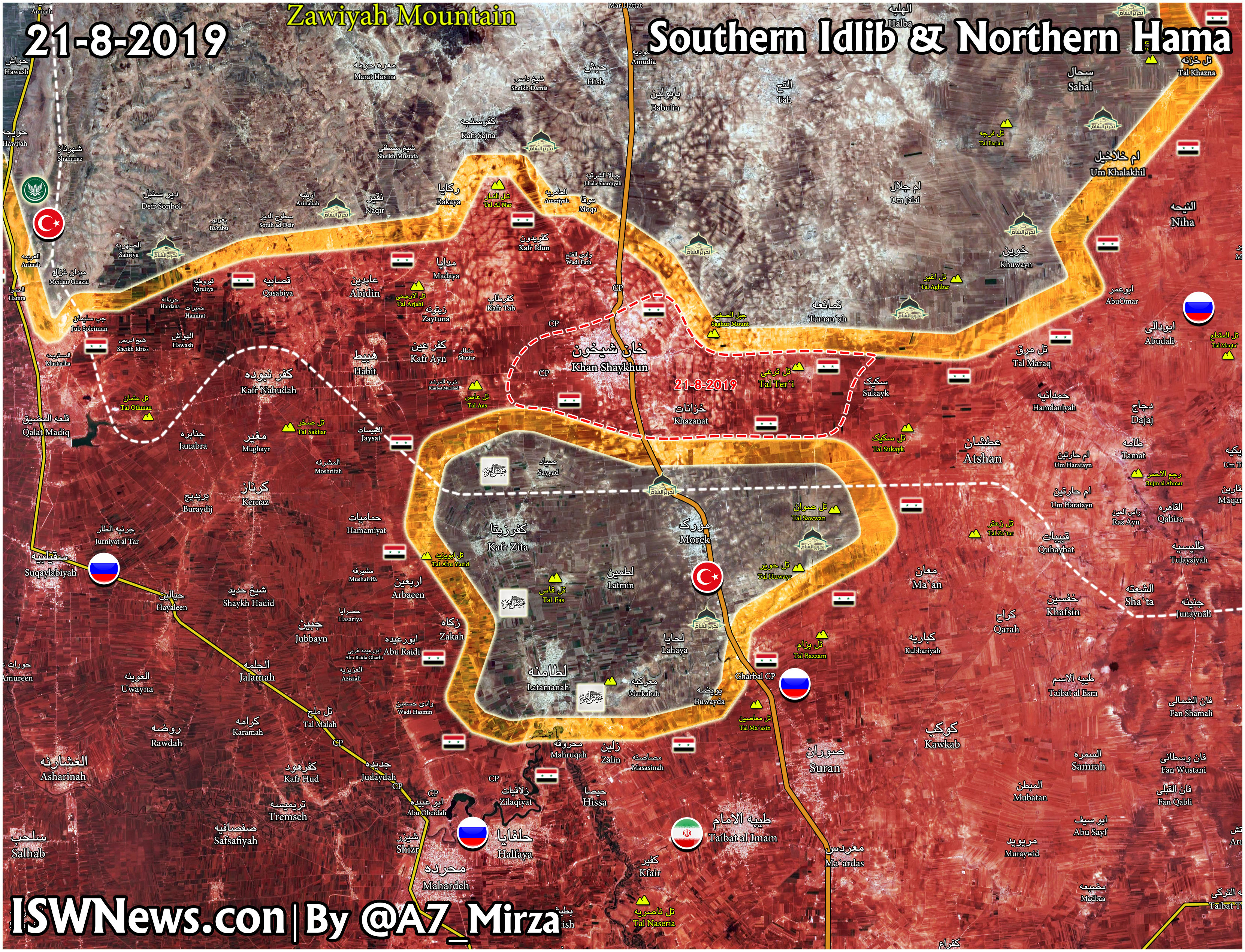 In its first reaction to the Syrian military advance, the Turkish Presidency said that all observation posts will remain in their positions in Greater Idlib, without clarifying the fate of Murak’s post.

Earlier, the SAA imposed control of Khan Shaykhun, which is located on a strategic highway linking Damascus with Aleppo.

The SAA is reportedly preparing to storm the militants’ enclave in northern Hama in the upcoming few hours. Most militants managed to withdraw during the last 48 hours. However, some were trapped in.

stupid is as stupid does
Reply to  PZIVJ

bravo to the brave fighters of the SAA! fantastic news!

Seems the Jihadists and their command learned from the past, and fled the pocket before it closed in bigger numbers as before. I guess thats he reason why both pro and anti gov said already yesterday that the pocket was nearly empty. So the old but good red army tactic does not work anymore as in the past. But still, its the best way to regain the territory for the SAA, only that the Jihadists would now use their own Buses to flee. So at the end the majority of the Idlib Jihadists will likely be encircled in a quite small area. And that will get very interesting i guess :)

no. the cauldron tactic is just used to squeeze those jihadist suckers into the next area and then do the same game again. more terrorists on a smaller piece of land every time… so they will start fighting against each others, sooner or later. and the turkish suckers have no reason to cry “foul”…

How’s that going to work with the Turkish post being isolated and unable to resupply? Maybe the Turkish soldiers can plant gardens and raise goats.

stupid is as stupid does
Reply to  russ

The goats are already too tired of Turk love… Perhaps they should switch on donkey?

Lord Humongous
Reply to  stupid is as stupid does

stupid is as stupid does
Reply to  Lord Humongous

Its Turkish donkey. A professional in that line of work…. and he knows those guys well…he has already habit to please them.

Lord Humongous
Reply to  stupid is as stupid does

Well, in that case…just so long as they leave Syrian donkeys alone.

russ
Reply to  stupid is as stupid does

I was thinking about as food. If the Turks need loving they have each other…

Where does it say this,about Turks can go anywhere on Syrian territory. My info was that Morek is an illegal base NOT agreed to in Astana Talks.

They are allowed free travel on the highway. And Putin will always give Erdogan the chance to save face. No need to unneccesary drama, this is only the beginning of the Idlib campaign, the (diplomatic or kinetic) conflict about north syria, and also Russia has much to loose as they invested much in partnership with Turkey.

Since the Ottoman Orcs are surrounded and have no Qaida Orcs to “observe”, SAA should set up gallows and put on a show for them!

Turks better go Observe somewhere else….or you might end up as Collateral Damage…and take your Observation Post with you…Latersss

It’s been much quicker and easier than I thought; I hope the Allies are ready to smash a counter-attack.

They will eat them alive….I can hear them Roar here in Holland…

It looks like Erdogan has made the strategic decision not to anger Putin which puts Turkey clearly in the Russian camp. He was recently embarrassed in Libya when Haftar bombed all of the drones he had sent to the GNA.

Erdogan is in a weak position: US will sell out the Kurds (at least not in near or medium term ;) ). Russia can not be more aggressive to Turkey, but since some months it was clear that Erdogan would prefer to loose Idlib and to use his resources on the Kurds. Turkey is against both US and Russia in Syria, and he overplayed his hand.

As a pragmatist, he will be okay with the development as long as he saves face domestically, and can focus on the Kurds, which can bring much higher political capital from his voters anyway as Idlib.

Unlikely – the occultist baby killers have already been warned by Hezbollah not to attack Syria. Any major attempt by the zionazis to save their mercs would mean war with Hezbollah and even a possible attack toward the iof within occupied Golan. The last chance for the zionazis were the mercs and their Turkish vassals – the party is over and even the US will not interfere.

Hmm. I dont think Hezbollah will attack israel just to save Syria. Now if Hezbollah was bombed in Syria it would be a diff story.

Any one else think that was a little too easy?

Nope….not me….would be nice if the rest goes easy too….

I would like that too, just seems rather rapid compared to years gone by.

Nice trolling as everyone knows Idlib is a turkish buffer zone. Not a US one. It will take pressure off SDF as islamists will be sent to the front to oppose SAA, relieving pressure from SDF, which is preparing for a confrontation.

Beware! These Folks get paid in $hekels to manipulate & speak with Crooked Tongue…

Copy this and use it every time you run into one of those PARASITIC HASBARAT-TROLLS:

Taken from UNZ Review, article, “Use of TERMITE by Louis Farrakahn was exactly right” – “Arthur Koestler, (a person of the Jewish Faith –My, Freespirit emphasis ) is quoting from Maurice Maeterlinck’s Life of the Termites in order to establish in his readers’ minds a salient political point. Not only does Koestler find the termite to be the most accurate metaphor for society’s decay, but his other book, The Thirteenth Tribe, debunks the claim by the white Caucasian Ashkenazi Jews that they are Jews at all! His careful, scholarly, and historically accurate 1976 study found that the white people we think of as Jews—the Netanyahus, the Jonathan Greenblatts, the Alan Dershowitzes and the rest of them—are imposters with no genetic connection to the holy land or holy people of the Bible; they are not even Semites! Koestler  proves that their Caucasian tribal ancestors converted to Judaism sometime in the 8th century. So the charge of “anti-Semitism” constantly leveled at Blacks and their leaders has no actual meaning at all.” https://www.unz.com/article…

After it was clear the Jihadists were encircled, they already moved out of the pocket in big numbers. They by now know the tactic, and avoided being encircled this time in big numbers. Plus, after SAA tock the key hilltops, Jihadists had no chance anway, and their leadership is not stupid, and has excellent intelligence capabilities provided by their sponsors. It lines up.

It went quicker than I hoped, but in general it seems to confirm my opinion that the “kingdom of Idlib” is a ragatag bunch that so far have not had to fight on their own (ISIS always used to help at the other end of Syria) against a properly organised and experienced army. It is the time to show what they are made of, and it seems they are not made of the tuff stuff!

the next 48 Hours will be very very interesting concearning the animal fuckers in morek……….they are an illegal invading occupying army…so SAA could take them officialy POW…….they could wait for the animal fucker erdogan to contact them directly this time……..or just attack the bunch of paedophiles and animal fuckers and send them to their fucking virgins………….. my quess is….. it depends on Erdogans agreeemnt with the USA concearning east syria….if the Agreement truly goes ahead and Turkey makes a deal with the USA, then SAA has green light to attack and take them POW……….if Turkey Refrains from the Agreement with the USA, then Putin will bail them out, Anyway .. this is definetly a very interesting turning Point in the syrian conflict, for SAA, for the kurds, for the USA and Russia.

I hope you are right and it is as you say. Which will mean Turkey will side with the Us (because the Turks are bloodthirsty and stupid) so then maybe Russia will help Syria shoot at invading squatter Turds.

Keep on chipping away at idlib, soon it will be the Kurds turn lol

Erdogan knows free raping is over.Now he must go rape goats and camels as usual.

As I observe this history in the making that’s taking place in syria,if it was up to me I would make all my offence move to besieged Turkish observation post or advance close to them so they can retreat.

This is coming out of nowhere and with mind numbing speed. more of this is probably coming too. My take.

I say put them in buses and send them off. The jihadists will wonder why the roof of each bus has a huge target symbol painted on top…

I speculate it near even but Sukoi edges out Migs in bus kills 1.33 to 1. Place your bets….

syrialiveuamap shows the SAAF bombing near the Turkish OB post at Murak right now, are they just blowing up empty buildings for the fun of it, or are they actually vacating the Turks and their proxies the hard way.

So is it just HTS and Al Nusra fighters still trapped here, or are there pockets of NFL and FSA fighters too, probably not, they would have gotten a free ride out with the Turks. Are they sure HTS is still besieged, apart from a few SAAF attacks near the Turkish OB post located near Murak, there is no fighting being reported on in the south atm, just to the north.

Pretty sure there are israelis and other “sympathetic” nations’ observers in those “turkish” observation posts. As far as morek is concerned, the israelis would be gone by now. But an interesting opportunity for a little interrogation if they could be captured