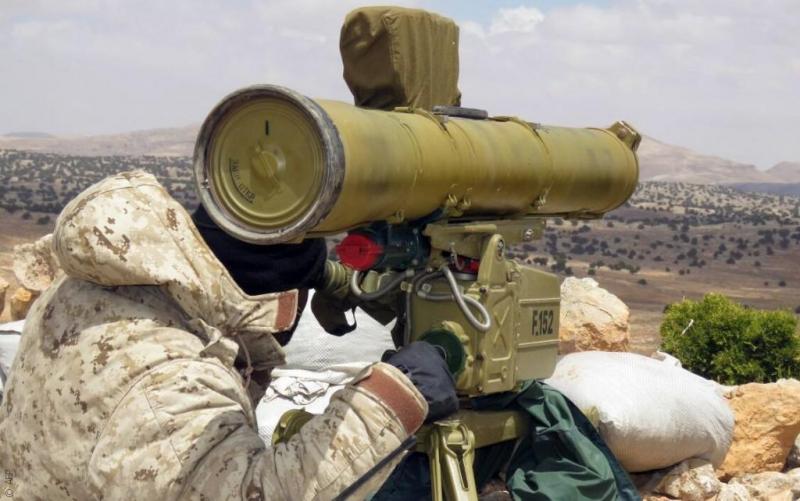 On June 10, the Syrian Arab Army (SAA) Commandos destroyed two vehicles of the Turkish-backed National Front for Liberation (NFL) on the al-Ankawi-Qalidin road in the al-Ghab Plain in the northwestern Hama countryside with two Kornet anti-tank guided missiles (ATGMs), according to the Syrian pro-opposition SMART news agency. The Commandos also targeted a van which attempted to evacuate the injured fighters with a third ATGM.

Syrian pro-opposition activists revealed that 12 fighters of the NFL’s 2nd Coastal Division were killed and many others were injured in the ATGM strikes.

The 2nd Coastal Division targeted two groups of the SAA with Fagot ATGMs in the northern Lattakia countryside on May 31, which resulted in the death of at least one SAA soldier. The SAA’s June 10 attack could be a punishment for the NFL group.

Local observers claim that that the SAA is using a newly supplied Kornet-EM ATGM with a range of up to 10km to hit targets on vital roads in the al-Ghab Plains and in the northern Lattakia countryside. However, these claims are yet to be confirmed.

i just saw the pictures, it was a really bloody mess FSA part everywhere

Found it. Those Orcs looked like jigsaw puzzles with a couple a pieces gone! :D

Do you have a link, or hint, were to find the pics? Edit: down in the other replies are some links

This seems to link to a screenshot, not to the video.

It is beautiful. Those images brought greater joy and laughter into my life.

Yes. The aggressors, Daesh, Qaida and their ilk have set the ground rules. Playing with one hand tied by Political Correctness is not a sane option.

That’s not graphic, that is a work of art. When I see jihadist bodyparts and blood soaking the ground, my brain releases large amounts of endorphins.

I don’t know why these guys killing themselves for US, UK, France and their proxies Israel, ISIS and PKK. SDF, YPG and Peshmarga are PKK.

http://www.palestineportal.org/wp-content/uploads/2017/01/Maps_1897-Present.jpg Click on image for full screen. After full liberation of Syria all Muslim nations Egypt, Jordan, Syria, Lebanon, Turkey, Iran, Iraq, Russia, China and Pakistan will come together to liberate Palestine from illegal European migrants Israel by using their own weapons and army units. They will not stay calm until to erect the Palestinian flag on Tel Aviv.

Not Jordan because they are dominated by Israel and Saudi Arabia after Israel Syrian army is going to invade Saudi Arabia to Qatar.

russia and china are muslim nations ?

All Muslim nations and Russia and China. I think now its clear for you only.

“The 2nd Coastal Division targeted two groups of the SAA with Fagot ATGMs in the northern Lattakia countryside on May 31, which resulted in the death of at least one SAA soldier. The SAA’s June 10 attack could be a punishment for the NFL group.”

How fitting the scum are.

The UN is now crying crocodile tears when a spokesman decried the second missile attack on a van ‘ rescuing ‘ the wounded.

Funnily enough I have not heard this UN spokesman decrying the deaths and injuries of thousands of Palestinians at the bloody hands of the Israeli Army during the current demonstrations against the illegal theft of Palestinian lands by Israel, that is illegal as recorded by a decades old UN Mandate demanding the restitution of these lands to the Palestinian owners and that has NEVER been enforced .

The UN have also NEVER spoken against the de facto slavery of civilians within the areas controlled by the terrorist mercenaries who are supported totally by the US Coalition of Terror.

Your’e an idiot that’s all you hear the poor Palestinians screw the terrorist from time immemorial. The whole thought of them is nothing but thieves. Nothing but a bunch of sand scarabs.

You are a Zio Troll, so what does that make you Neil ?