Syrian government forces have launched a counter-attack against ISIS terrorists inside the city of Deir Ezzor.

The Syrian army, supported by the Russian Aerospace Forces and the Syrian Air Force, attacked ISIS units in the areas of the cemetery, Jiraiya, the Panorama Army Base and Harrabesh.

Heavy clashes are ongoing in the city.

Some pro-government sources report that the army has recaptured some points along the road linking the Deir Ezzor Airprot and the rest of the government-held point. However, this has to be confirmed. 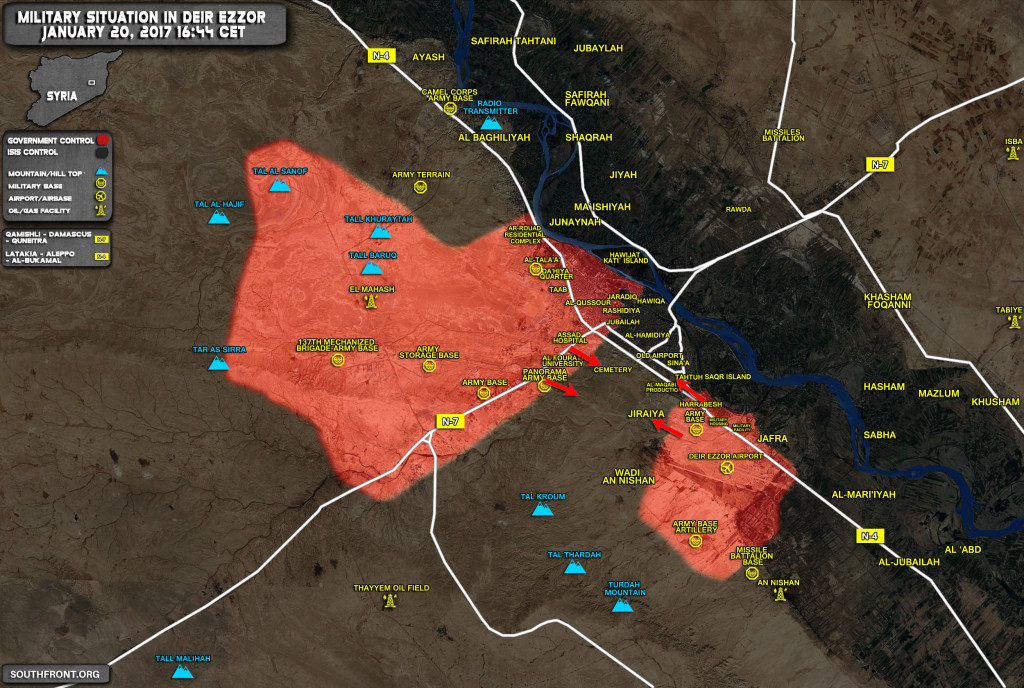 Allegedly they have retaken half of the cemetery.

Hello, I am fan reader from East Europe. … Deir-Ezzor is the most dramatic battlefield in all of Syria and Iraq at this time. The implications are tremendous. I would like to suggest SOUTHFRONT.org to elaborate and publish an article, an analysis regarding the possibilities and options available for SAA to hold on to Deir-Ezzor and fend off the Daesh offensive.

The goal should be to deter, break and/or lift the siege, weaken the attackers, counter-attack successfully or simply to resist for a longer time. It is very likely that NO land operation is possible at this time. Although the SAA and allies have opened new fronts against Daesh in Eastern Syria, they are too far away and are lacking resources to push for a very quick attack up until Deir-Ezzor. The only possibilities to help the defenders of Deir-Ezzor are via airspace.

What would these possibilities be? 1. Is the SAA air force capable of handling this situation by itself? Likely not. How can the Russian aerospace forces help? 2. Can the Turkish air foces go down to Deir-Ezzor and, in coordination with either RU or Syrian ground instructors, hit ISIS targets? Is this even a possibilty? 3. Are the USA air forces from Tikrit, (Iraqi Kurdistan) willing to strike Daesh targets in Deir-Ezzor? Is this even conceivable? 4. Can the Iraqi air forces fly to Deir-Ezzor and hit Daesh attackers? (they do have some F-16’s recently granted by USA)

What about a parachute commando operation? Are Russian paratroopers capable of being deployed near Deir Ezzor and immediately engage Daesh attackers? What are the multiple risks of such an operation?

Lastly, how can the defenders be reinforced and supplied other than by air?

SouthFront has already published a very solid material on the situation in Deir Ezzor – I believe you published it in early December last year. If possible, elaborate on current possible ways to support the SAA stranded defenders in Deir Ezzor resist and repel Daesh desperate or well-planned attacks. Thank you

1. The SAA can land helicopters with new troops and take away injured. It helps if there is a bigger buffer zone though. You don’t want one of those helicopters loaded with troops getting wrecked.

2. They are so ineffective that they cannot even take Al Bab. Check the map and see where Deir Ezzor is.

3. USA are already doing strikes all over ISIS territory. Mostly going against high value targets, like commanders and military infrastructure.

4. They have their own operations, Russia, Syria and USA are already doing strikes against ISIS.

Why would Russia take a huge risk and deploy troops inside the pocket? It would help but not worth the risk.

The defenders can only be resupplied by air. They have to hold out for at least a couple of months more and relink the two areas. ISIS do not have infinite manpower and are getting wrecked on many fronts.

Agree VGA – DeZ is invested but can hold out with the airbridge. I don’t know what fantasies Gelu has, SAA will certainly get NO help from US/TU/IR forces, air or ground. We rely on the SyAAF and RuAF who are slowly destroying Dai ‘sh forces towards Tadmur and operating from T-4 airbase should be able to conduct air strikes around Dez. Situation is serious but I don’t think Dez will fall

A land operation on DeirezZor is both feasable and easy and quickly to organize.

If Assad were to come to an agreement with the SDF, including a march by SDF on DeirezZor, SDF would have fighters just 25 miles through open desert from the city while they, at this moment, are amassing troops and supplies in staging areas in southern Hasakah for the third phase of the attack on Raqqah.

It seems the political will is lacking at this moment in time.

Advance by SDF would be great. Perhaps Assad is willing to cut a deal and give up small Hasakah base (or more?). Just think of the headlines “Kurds to the rescue of Deir Ezzor” Sorry about being rude earlier. I was in a bad mood. :(

I’m really starting not to trust news from either side in Deir EzZor. There’s a certain realistic tolerance you have to have for each side embellishing news for their side, but Deir EzZor has turned into some kind of weird-assed propaganda war. None of this is directed at SouthFront, who (rightfully so) tends to report on the conservative side, ignoring extreme views on either side. But a quick look at all of the MSM, alt.news and social media sources would make one think they are not even reporting on the same battle.

Wadi Barada was like that, but you could pretty much read between the lines and figure out what was obviously fake. The fake news tended to be one-sided on that battle, with the rebel side touting the usual tripe against ‘the regime’. Things unfolded slowly enough where it was quite obvious when one side would report something, then the other side would accuse them of the same thing a few hours later.

The news from Deir EzZor is sporadic and infrequent – it’s difficult to figure out who did what first. And almost every incidence of civilian death, executions and press-ganging conscripts has almost immediately been repeated by the other side. I tend to think that is pretty characteristic of U.S. psyops, so it is actually the Syria side that is reporting these transgressions about ISIS, and then propaganda mills repeat that accusation against the loyalists. But that’s not always the case as far as I can tell – there are just far to few sources to cross-verify anything. Instead, you just enter an echo-chamber of accusations and counter-accusations without being able to determine the earliest or most truthful.

What terrifies me is that the powers that be (= the U.S.) are manipulating social media and alt.news sites so the original reports/accusations are not accessible. The only thing left are secondary sources which lead nowhere, or to some newly-created fake news sites (generally, but not always, supporting the rebels/ISIS).

The most significant danger to ‘The truth’ isn’t iron-fisted censorship, it’s subtle censorship designed to confuse and frustrate anyone trying to dig out the truth.

The Western MSM, especially English language don’t even need to lie, just censor out by sins of omission, e.g. zero coverage of Deir Ez-Zour for years, no reporting of countless massacres, car bombs etc.. right in Damascus, completely ignore all the good news stories re. Syrian and Russian humanitarian/relief ops into besieged villages in Idlib etc.. SouthFront is good, generally tries to be factual , I also discount wild claims by various cheerleaders from ALL sides.

I tend to agree with you here.

Fake news and propaganda have always been a problem in the reporting on Syrian civil war. It tends to get worse lately, Aleppo and DeirezZor main examples of fake reporting, even by major media.

What is clear to me that, at this time, DeirezZor, its garrison, its civilians, are not high enough on the priority list of both Assad and Russia to invest heavily in saving it.

What is not reported here is that, once DeirezZor is overrun, IS can free up a large group of fighters to attack elsewhere.

Deir Ezzor will remain in SAA hands. It will hold. ISIS simply don’t have enough boots, or armor to change the situation.