The Syrian army and the National Defense Forces (NDF), supported by the Russian Aerospace Forces, attacked ISIS terrorists along the Palmyra-Homs road and in the area east of al-Qaryatayn.

Government troops also conducted raids southeast of the Tiyas crossroads, targeting ISIS positions near Qasr al-Hayr. If Qasr al-Hayr is liberated from ISIS, the army and the NDF will be able to further shorten their contact line with ISIS along the road to Palmyra.

Strategically, the goal of government forces is to isolate the ancient city from the western, northwestern and southwestern direction prior to storming it.

The government advance west Palmyra also plays an important role in drawing back ISIS forces involved in the battle for Deir Ezzor. 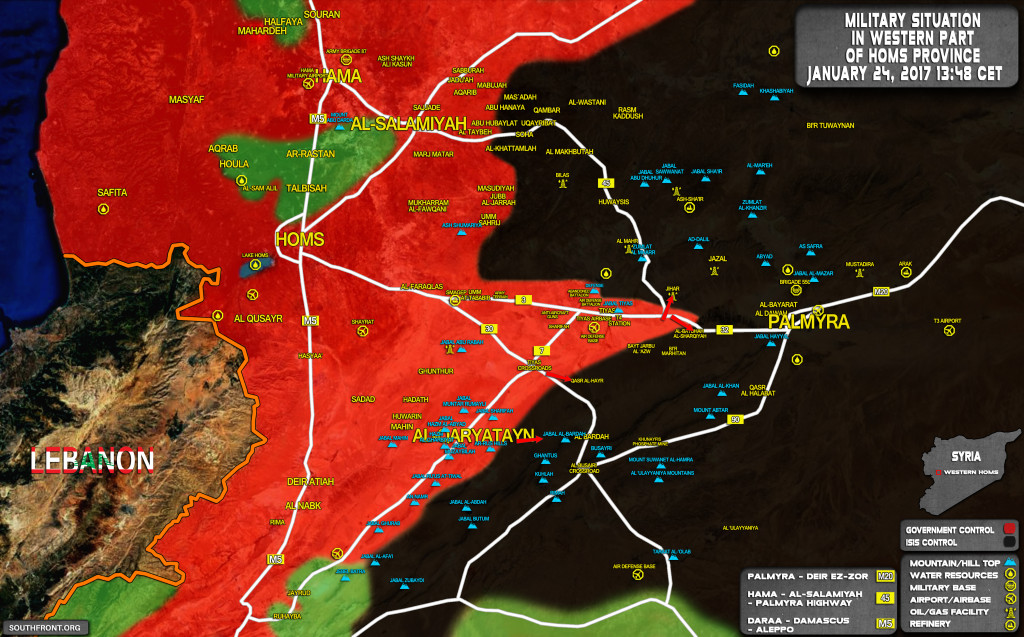 This operation is a very slow undertaking, considering how the US led fraud “terrorists” in Palmyra are doing willful damage to the ancient structures in that most historic city…. Basically by the time the Russian/Syrian forces are able to storm Palmyra, these criminal bastards will have destroyed much of Palmyra’s important history…. That is the real tragedy..

New sheriff in town. Trump will help Kurds push south around Deir ez Zor. Going to freak out Turkey but who cares. SAA and Turks to work together. Kurds and US forces rescue Assad. It is really going to blow the UN bitches away. Assad is going no where.

The Kurds will not move out of their “territory” , Raqqa is just south of it , but extremely unlikely they would venture any farther south . However they would be inclined towards an incursion into Turkey , as the eastern third of Turkey is traditional Kurdistan. If Trump stops USAF from giving ISIS satellite intel , and stops their supply of weapons and materials , SAA could reclaim Deir Azzor .

I must be on the wrong planet. Hope You are not a cook even some make sense.

Looks like they’re making an identical mistake as before; a half assed effort east of Qaryatayn. They need to secure everything south of it, all of the mountain, the whole thing.

Exactly! They should take the parallelly running road 90. That was imperative already during the first palmyra offense. Big strategical mistake that not happenned.

Yep over extending. Single front push with no back up plan. Keep them guessing where is next attack going to happen when is it coming. Should just focus on cutting the road west of the lake. Keep pounding them from the air. Smoke everthing that moves no fuel no re supply.