Heavy clashes between terrorists and Syrian troops, backed up by the Syrian Air Force, are ongoing in eastern Ghouta. 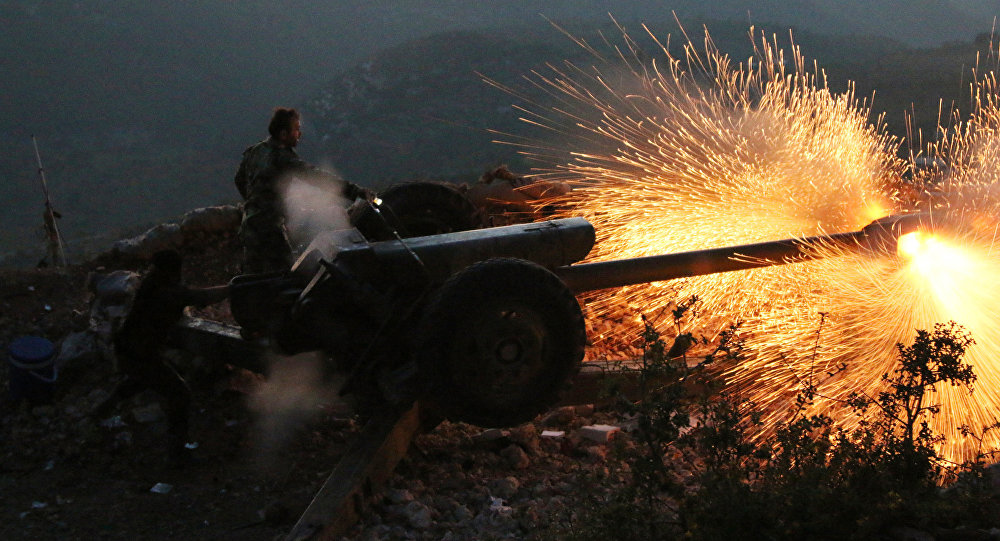 The Syrian Army are involved in heavy clashes with terrorist groups in the Eastern Ghouta region of Damascus, while Syrian aircraft strike terrorist targets in the same region.

According to Arab media, citing battlefield sources, Syrian troops are currently fighting against terrorists near al-Bahariya region in al-Marj.

During military operations in eastern Ghouta, terrorists’ gathering centers were targeted by army units in the city of Arabayn. As result, a terrorist was killed.

At the same time, the Syrian Forces attacked the Damascus-Homs highway from Duma, starting a new series of clashes with terrorists.

A tunnel near Ain Tarma town, near Jobar region, was also blown up by Syrian soldiers.

In addition, the Syrian Air Force targeted and bombed terrorists’ positions in Tal Kurdi and the adjacent areas of Housh Nasri, al-Shifouniya and al-Rayhan towns in eastern Ghouta.

On September 6, the Syrian Army started an offensive against Jaysh al-Islam terrorists in eastern Ghouta. As result, the terrorists were drove out of the key region, the southwestern side of Rahbat al-Ishareh, and suffered dozens of casualties.

Syrian soldiers also advanced towards the town of Maarateh in southern side of al-Moshrifeh, where a storehouse of weapons was taken of their control. The Army’s attacks killed at least 40 terrorists and wounded many more others.

At the same time, Jaysh al-Islam’s supply routes in eastern Ghouta were pounded by Syrian aircraft, as well as Syrian missile units’ shelling killed a number of terrorists in the region of al-Afi.