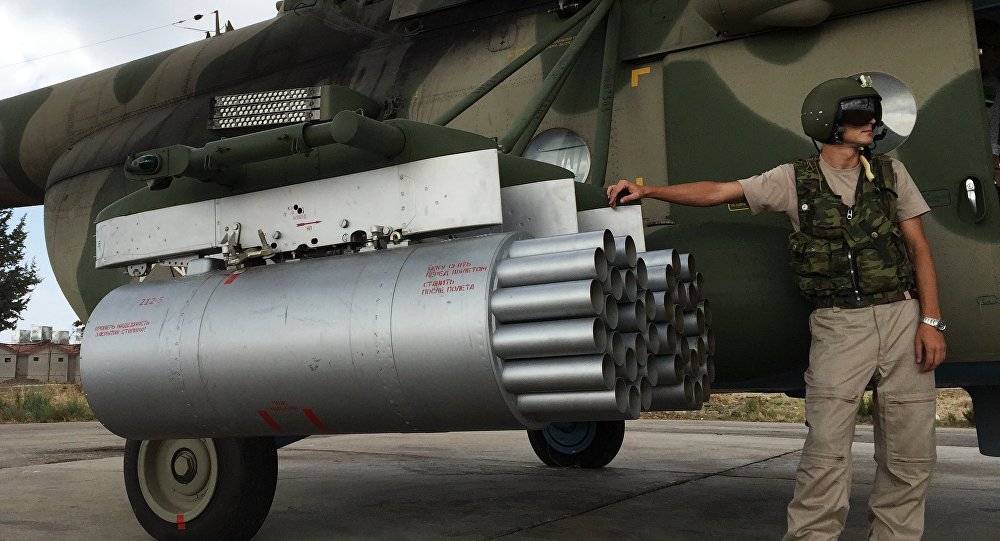 On Saturday, special operations units from the Syrian Arab Army (SAA) and the Tiger Forces carried out a successful air landing operation behind ISIS lines in the eastern Homs countryside, according to an official statement of the Syrian Ministry of Defense.

SAA special operations unites landed 21 km behind the ISIS defense lines in Homs Desert and captured Khirbet Makman village and the strategic Al-Qadir town, according to the statement. Furthermore, the SAA advanced 12 km in the southern Raqqa countryside and captured Bir Rahum village near the administrative border of Homs province. 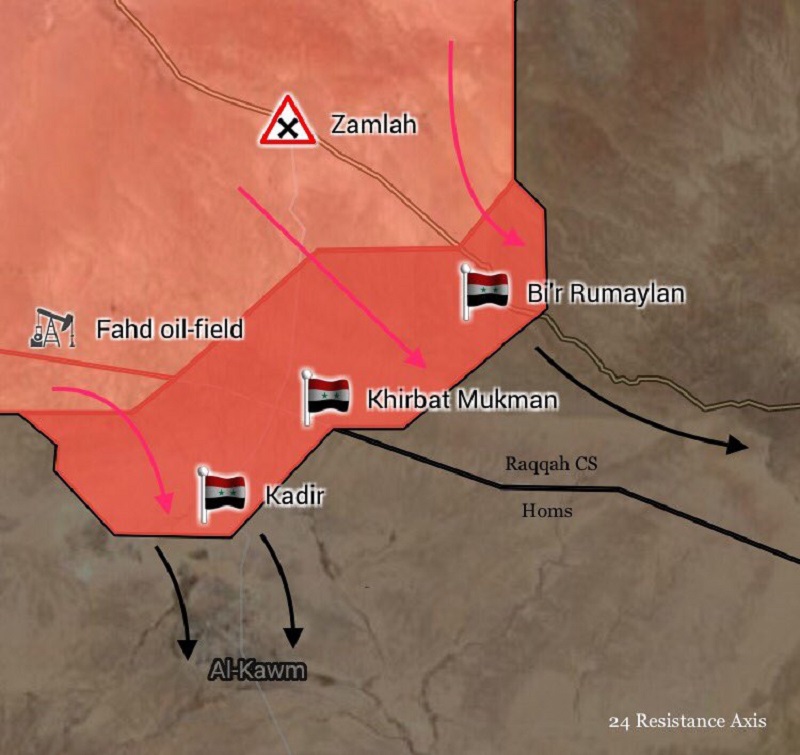 This was the first time when the SAA carried out an air landing operation during the ongoing war. According to some experts, the operation was directly assisted by the Russian military.

Air landings behind ISIS lines are considered complex and dangerous operations. ISIS eliminated the US-backed New Syrian Army after a failed landing in June 2016 when ISIS managed to kill most of the fighters and capture large quantities of weapons and military equipment.

Learning from what the US and the SDF did in Tabqah.

actually from what they failed to do. It’s even written in the article.

Article written by anti-us people, the SDf operation was a success blocked the regime forces while surrounding and ultimately taking the town.

You are correct, I was mistakenly thinking Al-Tanf, where the US airlift failed, instead of Taqba

There is nothing to learn from BOMBUSA but bombing.

We coordinated the same kind of air drop with the Kurds

They should do this more often, air landings behind enemy lines can be an effective way to collapse immediate ISIS defenses.

Very risky. They only tried it here with extensive Russian assistance and they had ground units nearby to attempt a rescue in case things went bad.

Isis keeps local forces in every town and city, yes it prevents airborne capture, but importantly, to control the people who are captives. No one wants to live under Isis. Isis needs them as slave labor and To Conscript their children. Isis will shoot them before letting them flee.

The local forces in abukamal were large, to control a large town. that’s why the American backed new Syrian forces were slaughtered last year.

Against Isis, The best use of airborne is against front lines with small local populations, not to assault cities. The value of doing this one time is the enemy has no idea if you’re going to do this again and where. That means diluting concentrations of forces on the front by pulling some back deeper behind the line.

The reason why the US backed FSA failed was they have no support in the region or in Syria which is very obvious. ISIS is becoming weakened as this progresses and even more desperate to cling to raids which exposes them and weakens their defenses. They are very disorganized at the top and will eventually succumb to leadership squabbles.

You don’t get such an important opportunity every day.

The resources, timing and overcoming all the involved difficulties can’t be overestimated. If such an operation fails, the losses quickly mount to staggering numbers. The paratroopers, the helicopters, planes and the ground forces, all have to link together flawlessly like a gearbox.

I have huge respect for every paratrooper, being fully aware that his life is in the hands of everyone else around him, but barely himself. Still not being able to afford any failures himself, just to survive an operation like this, not even talking about operational goals.

You need special forces for such tasks, considering Syria does not have the capacity to airlift and airdrop heavy equipment like the Russians do. You need highly trained individuals and groups that can handle and employ effective weapons they can carry on board of the aircraft. ISIS is not used to modern warfare tactics and their defensive depth can be porous, allowing vertical deployment within 10-20 kms or more from existing battle lines that would create havoc and debilitate the defenses of such battle lines and facilitate enemy defeat through high casualties or having the enemy withdraw ceding the battlefield.

Being able to vertically deploy forces in sparsely populated areas is easier, the need of real time intelligence is a necessity, and having a simple plan to strike to the jugular of the enemy defenses in the area is absolute.

About damn time they activated their airborne elements…

Should’ve done it the first time that foreign troops were detected and SECURED THE BORDER with airborne troops….

Hindsight is such a wonderful gift!

That was impossible and still is.

They were needed to secure bases and airfields. With the ever advancing SAA the risk of an attack on one of these base rapidly goes down. As such, at least some of these troops are freed up now.

That doesn’t mean that we will see more operations like this, but the possibility is there. Another step to weaken Daesh’s defenses, as they have to put troops far behind the front line too, for countering future operations.

The mere existence of paratroopers and the possibility of such attacks already has consequences for an opponent.

Like the Germans used their ships as “fleet in being”, actually, barely leaving harbor, nevertheless forcing the British to address their existence. Here it is “paratroopers in being”.

It seems the time for such operation has come. With Daesh forgetting about this threat and with SAA having more paratroopers available for front line duty.

“Vertical Envelopment”.. It’s great news, it means that the SAA has been put in great fighting shape.

I would say that its is not there yet but they are surely on the way there. Compearing SAA 2 years ago and now shows huge difference.

I think that these so called Tiger forces are the difference + of course the Russian, Iranian and Chinese training; not forgetting that fighting experience gained from Hezbollah.

Tiger forces, 5th corpse are most noted. There are good pieces on this site describing each “unit”.

I don’t suppose you could post a table with the names of each side..

This was the Special Airborne Force not the Tigers who dropped behind the lines, be mindful of which groups exist, since this is where Suhleil served as a paratrooper and commander in before forming the Tigers.

I bow to your understanding. I follow the conflict in both Syria and Iraq, but I must state that I do get confused by the scores of anagrams for the groups. now we have the PMU, the NSA and this and that – as a simple man, I just wished they called tem goodies and baddies.

The Syrian National Council aka the Syrian Revolutionary Council has fallen out of favor of all the governments now which was supposed to be the standard bearer of the opposition. The problem found with all especially the Syrian Govt was they lacked the ability to control these factions in Syria. We get to see them as they truly are now proxy forces of the various countries involved that should confuse people even more since the US has so many brands in the fire right now.

Confusion is the greatest tool in the US arsenal right now. They are running Three Card Monte and the Shell game tables, all at once.

These are the Special Airborne Force they were primarily used for defense of airports but have a great deal of training in Urban warfare and counter insurgency. Sulheil was a former commander with them and he was coordinating with others on this to ensure this operation was a success.

According to some sources, SAA already reached Al Kawn, leaving Daesh just a single road to central Syria if I understand that correctly. With the SAA getting that close to Sukhna from the north, Daesh has to split off forces from Sukhna.

Now, it is to prevent the worst for Daesh, not being split apart losing the connection to central Syria. A retake of Sukhna would be a huge surprise now.

A brilliant move by SAA, hats off! (not heads off :P )

As said before, Sukhna more and more turns out to be the final pivotal point in the war against Daesh. What happened to the Khanasir plains before, will be central Syria now. While bigger and not being as easy to take, it will happen nevertheless.

“ It’s believed that ISIS may withdrew from the whole area if the SAA continues advancing in the area. ” ISIS may move back to Saudi Arabia now, if it wants.

Afghanistan, the new cell of the “caliphate” is already prepared. The new leader there unsurprisingly was a released guest in the US prisons …

https://twitter.com/MIG29_ says “for the first time in Syria , Syrian mod confirm that Syrian Army troops – Tiger forces – makes an aerial landing”. If true then this wasn’t a paratroop drop (does Syria have any trained paratroopers anymore?). More likely is that it was soldiers in helicopters being landed behind ISIS lines.

Excellent news, well done and continue until total victory. Only a military victory will bring peace to Syria, forget the politician agreements.

on the picture is russian pilot

It’s a file image they are commonly used when there are no photos are available , which are generally later used if they need them in a follow up story.

Real good stuff! Proud of the Syrian army–of the nation–of its people. Isis–So-long- farewell, auf wiedersehen–goodbye–to you-to you–to you and you and you . . .lalalalalal–lalalal (song from the movie, The Sound Of Music)–and it is beautiful music . . .just like the Syrian people . . .

This move is key to destroying what is left of the fraud US Isis forces still operating far to the west.. If the SAA can now move from Kadir south to link with forces operating north, then they will close a massive pocket to the west and rip ISIS “defences” apart… It will also finally link the Palmyra axis with the northern axis to shorten the SAA advance lines…

Well done. Good choice and timing. An area which wasn’t too complex to take and still causing huge damage, while tipping the balance to SAAs favor and side.

Lot’s of respect to SAA for this type of operation, there is so much that could go wrong with this.

Practice makes perfect. This operation should encourage them to try more.

A team Hannibal: I love it when plan comes together

“ISIS eliminated the US-backed New Syrian Army after a failed landing in June 2016 when ISIS managed to kill most of the fighters and capture large quantities of weapons and military equipment.”

The CIA’s intent was exactly that. To get ISIS lots o’ weapons/equipment.

Cool. The SAA needs to focus on the East and ignore the ISIS units in the West since that territory is useless to ISIS and Syria. The majority of it’s civilians fled long ago due to the fighting between the SAA and “rebels”. The SAA won yet got stuck with non-productive agricultural lands due to no remaining farm workers so Damascus abandoned those areas with ISIS moving in right behind them while declaring that their shitty caliphate was ever expanding by “conquest”.