Late on February 13, the Syrian Arab Army (SAA) and its allies secured several new areas to the north of the strategic M5 highway.

According to the Military Media, the army imposed control of the areas of Zaharat al-Mada’n, al-Ruduan and Shamico. These areas are located in the western Aleppo countryside.

Earlier today, the SAA captured the area of al-Muhandisin 1 as well as the town of Kafr Joum, also to the north of the M5 highway.

The M5 highway, that was completely secured by the army earlier this week, links the capital, Damascus, with the city of Aleppo, the country’s industrial hub.

The SAA is now reportedly advancing in the area of al-Muhanisin 2. Al-Qaeda-affiliated Hay’at Tahrir al-Sham (HTS) and Turkish-backed factions are fiercely fighting to maintain their positions there.

The 10 days before the next ceasefire are crucial. If SAA push further west of Atarib then it’s all over for US-NATO-Turkey terrorists. Given the speed of SAA & allies advance I think this will be the case. Syria will go down in history as the MENA country that did not yield before the hegemon, the country that fought back to literally change the world.

You got a link that states there are 10 days before a ceasefire?

I read it kicks in on Sunday

On monday the jihadists will break the ceasefire :)

Shock! Although this time the Turks might tell them to keep their powder dry

The Turks and jihadi’s have both been sniffing far too much dry powder.

It has destroyed their neanderthal brains. :)

On a different note, ‘What do you think is the reasoning behind the Syrian and Russian position of not replying to Israeli aggression? It seems incredible that they allow Israel carte-blanch to bomb at will many parts of Syria and even their capital city Damascus. Do you think the Zionists still have hold on Russian economy? Are the Israelis just testing Russian weapons response or what do you think is going on?

IDF is hitting nothing

Not exactly true. Some time ago the Israelis destroyed a Russian anti missile site in Southern Syria killing some Syrian soldiers in the process. Hardly nothing. I still find it strange and don’t really buy any of the explanations given. I understand that Russia and China are playing a long game but I don’t see where this turning the other cheek is helping.

the reasoning is that they’ve got other more urgent fish to fry at the moment and as long as the israeli concentrate on the Iranian wharehouses Putin might not feel its worth expanding the conflict over,I think he will stick to the game plan and that is to help Assad fix his country, while not to become part in a larger iran-israel conflict.

The irgc for the moment be better dispersing there freshly flown in munitions over more and smaller storage facillities.

I think its as simple as accepting that an Israeli attack on Russian assets in Syria would be almost guaranteed if the SAA or Russia reciprocated the Israeli aggression, and that would guarantee a Russian response attack on Israel and that would force NATO to answer the US dog whistle.

Israel and their US mercenaries have been goading Russia to do this. Partly because the Israeli’s and Yanks consider themselves invincible. They are NOT.

Israel and the US are striving to expand the Syrian conflict whilst pretending to export Democratic Values to the Middle East, that is in reality the Wahabi ‘black flag head chopper warlord democracy’.

Russia also has a domestic Khazar problem, as they have strong links to Russian Khazar emigree’s in Israel.

Israel and the US/UK would relish an explosion of anti- Khazarism in Russia.

President Putin and his staff realise that a structured approach to Western duplicity is wise. Thus far, it has worked as well.

If it works, the Syrians will be at least as impressive as the Haitians.

Ignore the fuckwit. His parents were siblings.

The Haitians defeated France with no help from anyone. His comment makes complete sense. The USA owes its independence to the Haitians whether ignorant Americans know it or not.

That fact makes me and 85% of the world wish the Haitians had not achieved independence when they did. Imagine if all the USA atrocities and genocide of the native people could have been avoided.

everyone defeats the French

Actually the French stopped the Islamic invasion of western Europe, after Spain fell.

The Franks. Mixing the French with Franks is like mixing Italians with Romans

people actually had testicles back then, afterwards the pope conspired against the french crusaders because they got too much wealth and power.

Pretty embarrassing for the Turks not to be able to control the SAA. They probably move too fast. Same as the Houthis, if you keep moving your enemies tend to bomb themselves

Biggest danger the Turks face now is the complete encirclement of their so-called observation posts. Erdogan may not be Suleiman the Magnificent, but he knows that a bunch of headchopping Salafist jihadis and only 6,000 demoralized Turkish soldiers with very poor leadership stand no chance against the battle hardened SAA, determined Shia militias, Hezbollah elite warriors and devastating Russian airpower. A mere squadron of modern Russian SU-35 can take out the whole Turkish airforce, whose only modern frontline fighters are decades old US F-16.

the turkish carpet riders have no fighting experience since world war 1…. same idiots like the Saudis… a lot of expensive armor, but too stupid to operate it. so i wish the SAA keep on rolling as fast and far as possible before Putin sucker announces the next ceasefire

Erdogan is a bombastic Islamist demagogue with neo-Ottoman delusions but very limited capabilities. Facing certified disaster, no wonder Erdogan had to talk “de-escalation”
with Putin on Tuesday, with a very weak hand. The red lines, from Moscow’s side, are
immutable: the highways will be liberated (according to the Sochi agreement). The neo-Ottoman sultan can’t afford a suicidal war with a resurgent and determined Russia. So, yes: he’s bluffing.

No more terrorists arming and repositioning ceasefire of Erdogan.

A later issued map from ISWNews : 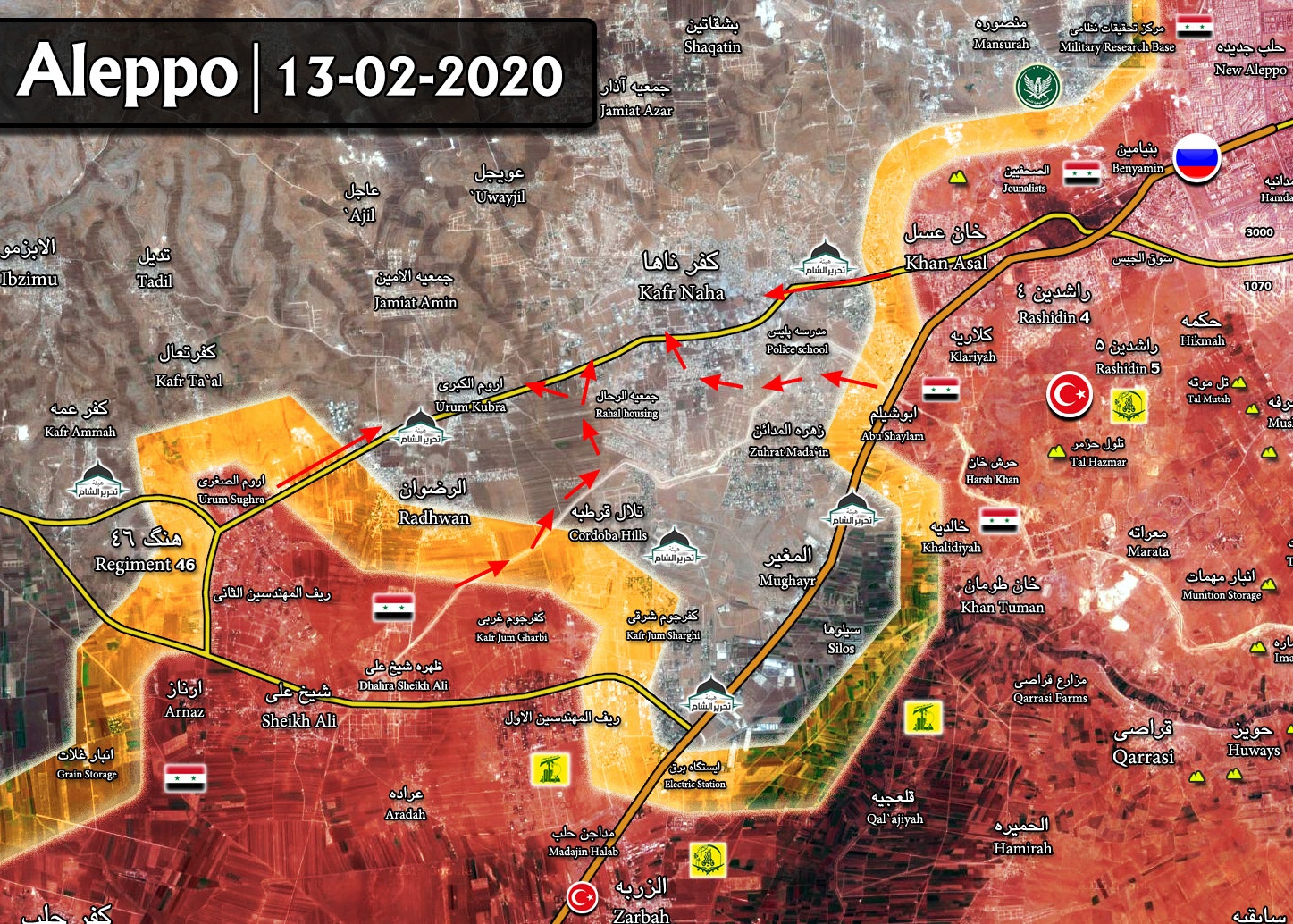 ———
In today’s operations, the Syrian Army and the Resistance Forces using very sophisticated tactics, have wrapped up terrorists’ business! in the area within hours!

And thus a large areas were liberated within hours from the terrorist occupation.
Also Resistance forces opened a new front in Nubl and al-Zahra axis…

That salient has been a thorn in Aleppo’s side for far too long.

May the SAA Gods of War prevail over the Evil Empire.

The speed with which SAA moves and achieves his aimes amazes me.
They became a first class fighting machine. I began to think that the Erdogan purged Turkish army must think twice before to attack Syrian army because the victory against SAA by no means garanteed.
I belive now that it is the best of the Arab army among the 20+ Arab countries.
God bless them.

Battle harderned af , newer weapons, more equipment and russian-allies advisors , yeap they got it compared to 3-5 years ago where many factors were against them.

I dont think its a SAA shelling civilians in Aleppo.. You must be disoriented..

you are a very special kind of stupid … are you not ?

great video of what ALLEPO was like in June 2019, once that rat rockets stop coming in .. it will only speed up … brave young girl

Thank you for the video.

Such senseless destruction of this ancient city is yet another stain on the reputations of the US/UK.
I am ashamed of the destruction that the UK is directly and indirectly responsible for in Syria.

The Syrian people continue to show the courage and fortitude that is an example to us all.

the resilience of the citizens is amazing

Although is a case of Needs Must, they are indeed an example to us all.

I cannot think that civilians in any UK cities so devastated by war and in a Britain ravaged by war would have the same spirit, especially if confronted by an enemy as barbaric as the Wahabi zombies.

I may be wrong, but I doubt it.

Israel looks stupid. So do you. You can do nothing about the crushing defeat. Impotent Israel.

You are wrong my friend, but as usual, you want misinform people.

his turkic khazar heritage would explain that…

our jewish asshole troll) go and lick your ass yourself, you troll sucker)

He isn’t a Jew he’s a zionist.

M4 left to send Mi-35’s, T-90MS’s and BMP-3M’s on a pleasure shoot down of and then the bus routes are properly open.

Its to early to do that, there are a big bulge under m4 that need to be solved first

Where is your sense of adventure?

Interesting direction the SAA is going now.
Looks like they are heading towards the one main border crossing into the idlib area from turkey.

If they do indeed cut this crossing(which they should do with very high priority and at high speed), it will mean certain doom for all jihadists AND turkish army morons that are hanging out in idlib…

Confrontation the other day between Syrians and U.S. troops – translation to english:
https://www.youtube.com/watch?v=T2Z6cAYAVMo

Moltke the elder would be pleased with this. The long lull wasn’t wasted, the US head-chopping, heart-eating rapers and slavers were proper undermined during it. Well done the Allies.