Pro-government forces, led by the Syrian Army Tiger Forces, have captured the strategic crossroad town of Resafa in the province of Raqqah. The town had been controlled by ISIS terrorist group.

The liberation of Resafa is the latest success in a series of advances made by government forces in the province. Controlling Resafa, the Tiger Forces and their allies are able to control the road between the town of Tabqah (controlled by US-backed forces) and the city of Deir Ezzor besieged by ISIS terrorists.

Meanwhile, reports continue appearing about sporadic firefights between US-backed forces and the Syrian army in the area south of Tabqah.

Yesterday, the US-led coalition downed a Syrian Su-22 warplane in the area arguing that the Su-22 had dropped bombs near US-partnered forces. 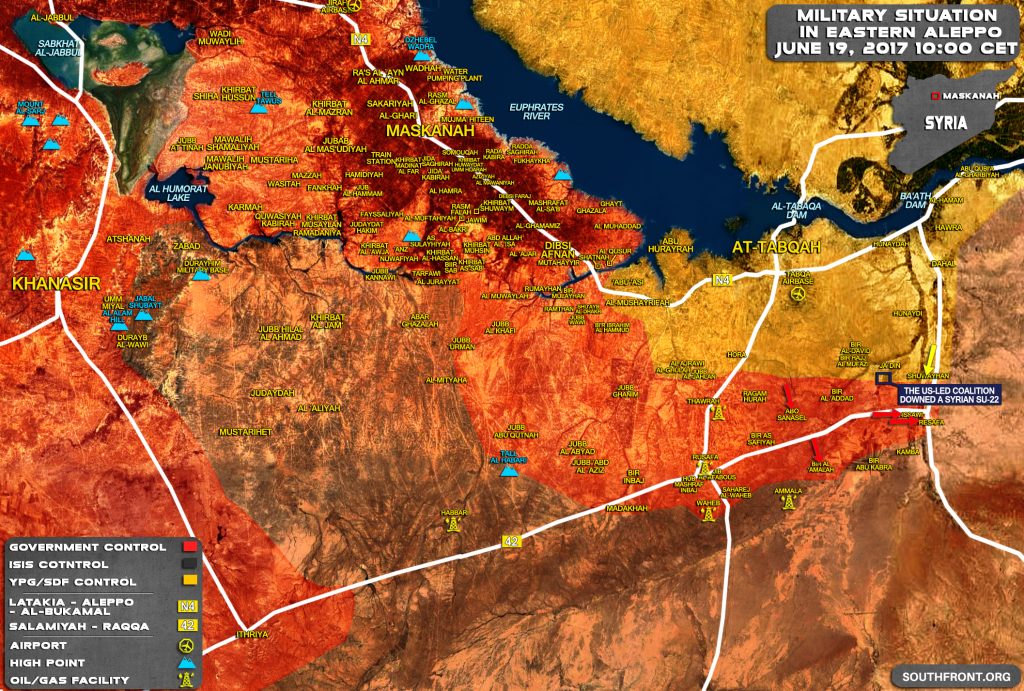 Aren’t Syrian and Russian forces in the north of the Kurd controlled area as a deterrent to the Sultan? If real trouble was brewing, they’d have to get out.

am not sure what u mean?

Didn’t Russian and Syrian forces move into the Kurdish area NE of Aleppo as a buffer?

Ah yes to prevent SDF and daesh from going south

SAA should secure the Highway 42, as I see SDF is unfriendly force and SAA will have to deal with them later. Assad army needs better military hardware to deal with SDF ad americans

kurds are only 10% of Syrian population. kurds controlling land west of the Euphrates is an overreach. kurds control all the water and electricity of largest dams in Syria. This is not going to happen.

The idea that Kurds are 10% of Syria is a modern re-writing of the facts. Before the war, the census showed Kurds were 6%. Fudging the numbers is part of the us plan tho legitimize rojava.

Will you predict that SAA will capture Deir Ezzor?