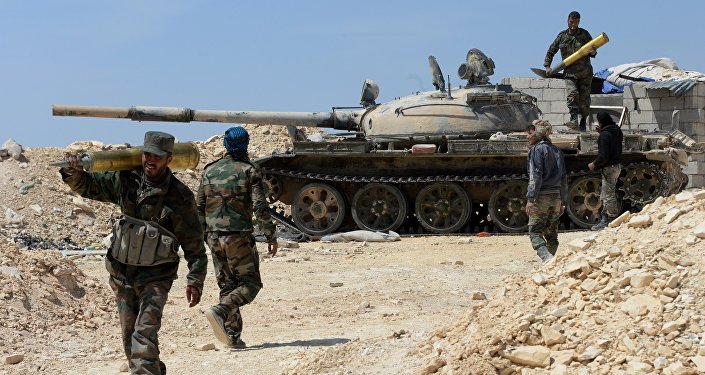 On September 28, the Syrian Arab Army (SAA) and its allies captured Hamad Omar and Rasm Al-Qunbar villages inside the ISIS pocket east of Salamiyah town in the eastern Hama countryside, according to pro-government sources.

In a related development, pro-government sources confirmed that ISIS captured many positions around al-Sukhnah town and on the al-Sukhnah–Deir Ezzor highway. However, according to the source, some units of the Tiger Forces were finally redeployed to repel the ISIS attack. The SAA will likely recapture all lost areas in the coming days. However, the ISIS attack slowed down significantly the government forces effort in the countryside of Deir Ezzor.

The ISIS-linked news agency Amaq claimed that so far over 100 SAA soldiers have been killed in the ongoing ISIS attack. Amaq also claimed that ISIS fighters destroyed 4 tanks of the SAA on the al-Sukhnah–Deir Ezzor highway.

slow, steady and clean … russian led coalition will be always successful in all their endeavours in the battle fields

The Syrian government’s Deir Ezzur operation on the Eastern banks of the Euphrates river is too vital to be slowed down by the US/Zionist/SDF/Kurdish/ISIS terror coalition. Syria’s own existance as a state depends on the reclaiming of Syria’s oil and gas resources and the Syria Iraqi border there. The Syrian government troops should by-pass the obstacle and head straight for it’s oil and gas fields leaving the Russian air power to decimate the US terroists. A lightning advance from the South on the Syria-Iraqi border toward Al-Bukmal border crossing should be launched immediately if need be with the use of air dropped troops. A bridgehead towards the Eastern banks of the Euphrates river set up there, and a rapid advance to the North towards the oil and gas fiekds and East along the Iraqi border should start immediately. Iran and Hezbollah need to deploy many more troops and equipment to beef up this front. This is a battle for the life or death not only for the Syrian state, but for Russia and Iran itself.