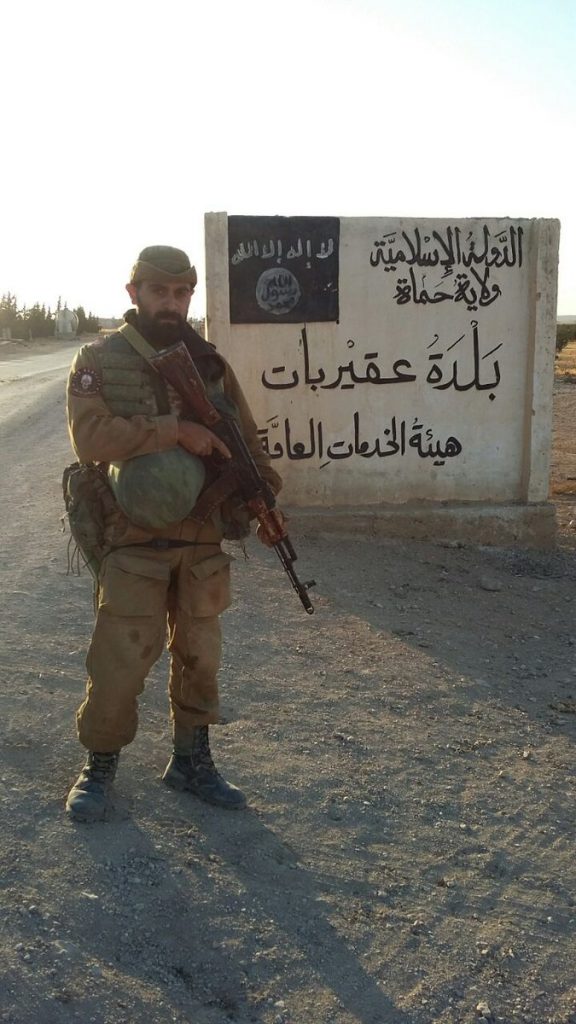 An ISIS Hunters fighter is in Uqayribat. Click to see the full-size image

On Friday, the Syrian Arab Army (SAA) and its allies captured Rasm al-Abd village south of Uqayribat town in the eastern Hama countryside, according to pro-government sources. The source added that the SAA also captured Huraysha, Wadi al-Azem and al-Mua’adamiah villages southeast of Uqayribat town.

Earlier reports appeared that the SAA captured Uqayribat town. The 5th Assault Corps’s ISIS Hunters released a photo near Uqayribat “Public Services Committee”. This confirms that the SAA and its allies were inside Uqayribat town even if they were not under their full control.

Meanwhile, pro-government sources claimed that the SAA captured Bishri oil field and the pitch factory near the Bishri mount in the province of Deir Ezzor. Some sources argied that the SAA was in only 35km from Deir Ezzor city. However, these claims are likely false.

The SAA media department released a video of the SAA and its allies reaching the administrative border of Deir Ezzor province. Russian Special Operations Forces service members could be noted on the video. They were destroying ISIS vehicles with a Kornet-EM Anti-Tank Guided Missile (ATGM).

Kornet-EM is the latest version of the Kornet ATGM. It has a range of 8km against moving armored vehicles or tanks, and a range of 10km against static targets. The SAA was also supported by Russian attack helicopters, mainly Mi-28N and Mig-35.

Uqayribat is a town? It doesn’t show any structures on map.

Try wikimapia….. it is a small town

“Kornet-EM is the latest version of the Kornet ATGM. It has a range of 8km against moving armored vehicles or tanks, and a range of 10km against static targets.”

There are 2 different versions of the Kornet-EM anti-tank guided missile:

The anti-tank variant has a max range of 8 km and penetrates up to 1,300mm of RHA value.

The thermobaric variant has a max range of 10 km and penetrates up to 1,100mm of RHA value. The missile also has a proximity fuse and can be used in the role of air defense against low and very low aerial targets, including attack aircraft (ground attack/ close-air support), drones, and attack helicopters.

“The SAA was also supported by Russian attack helicopters, mainly Mi-28N and Mig-35.”

Also, the Russian MOD announced the deployment of the Mi-28UB (training variant) to Syria to have it tested in real combat situations, while the Mi-28NM will be combat tested some time after that with no specific date given.

You know your shit dude

Do you know if the prototype Russian tanks with a fast firing pair of turret mounted cannon etc deployed recently have had any success ?

I’m not know yet, but I assume it performed well enough in the hands of the SAA for the Russian MoD to order a pilot batch from UVZ for use in Russian ground forces. The main reason is the delay in the procurement of armored vehicles on the Armata universal platform.

[KUBINKA / Moscow Region /, 24 August. / TASS /. The Russian Defense Ministry and Uralvagonzavod (UVZ) signed contracts for the supply of new T-90M tanks and Terminator support vehicles to Army-2017, as well as contracts for the overhaul of T-72B, T-80BB and T-90 tanks. This is reported by the correspondent of TASS from the scene.]

Thank you for your reply. I hope we see some combat footage of these vehicles soon.

How much personal has SAA have right now on disposal? How many military servicemen are active ? How much different is SAA now since the start of war? Is there any article about that on SouthFront. Or you could write something about that. I’m sure those wiki numbers are ( 180.000) from before the war.Thx

Personnel should be approximately 150k according to updated data. However, many of these do not fight. The SAA has approximately 80-100k soldiers fighting in Syria. This includes proxies as well.

There is no way anyone can rely on wikipedia since they are unreliable for information.

Never bother with wikipedia that source is unreliable as many find it’s information outdated and missing huge amounts of historical information.

It can and is manipulated by Jews.

With no air cover, no aerial surveillance capability, and no civilian human shields, the Jew regime change proxies are sitting ducks for Syrian government coalition forces to clean out these contained areas in central Syria and open desert areas away from built up areas in eastern Syria.

The Jews are responsible for this war. It wouldn’t have happened without their machinations. Their evil pedophile rape cult should be outlawed, Palestine admitted as full member of the UN, and the 100+ UN and other resolutions that Israel is in chronic and flagrant violation of implemented.

” Their evil pedophile rape cult should be outlawed, ”

It is illegal :) The problem is that the ‘cult’ owns most of the judges , prosecution lawyers and senior police officers as well.

Americans still need to wrest Jewmerica from these evil pedophile rapists. Along with Palestine, France, Canada and Britain where over 95% of these cultists live and work to exploit and enslave humanity. America First is a step in the right direction. And the evil Jews and their swamp slaves are fighting it tooth and nail every step of the way. The last election and it’s aftermath have opened the eyes of many Americans to just how Jew infested, ziocon, and corrupt America has become.

The blood sucking Jew pervert prostitutes are carrying out mass statutory rape around the world. Anyone else would be imprisoned on felony sexual assault, endangering the welfare of a child, and other misdemeanor and felony criminal charges.

“According to the Health Department, 24 cases of herpes have been linked to circumcision since 2000. Two of the infants died and two others suffered brain damage.”

These pedophiles statutory rape 3,600 Jew cult children a year in New York City and 65,000 a year in Israel.

You need to go away. No room in the world for such as you.

I have a problem with psychopaths. Like you. JUST go away.

You’re a malicious idiot and a big liar. It sounds like you’re a Jew pedophile rape cultist. The Jew baby rapers are the ones who’re criminally insane. Not the people who’re trying trying to stop it.

The problem is sadly there are not enough criticism from within the Jewish community that speak out enough in opposition of these practices and ideology.

That’s because they’re cult brain washed and mind controlled from birth to accept it. Which is why their cult needs to be outlawed.

This poster is a psychopath. South Front should outlaw him. KiraSeer

South Front is doing humanity a service by getting the truth about Jew crime and evil out. Miscreant Jew pedophile rape cult supporters like you trying to cover it up are a big part of the problem.

I agree and if the blind of the West wish to see what the Zionists would do to ALL other races and creeds when they can , a look at Gaza is their future.

Until the Zio scum are able to do this and steal all we have, they keep us all enslaved by debt. Directly with personal debt and indirectly with government debt and taxes.

Russia has almost no government debt and has expelled 90% of it’s Jews from their peak. And is defeating their proxies in Syria and blocking the Jew world order’s plans in many places. That’s why the ziocons are going after Russia with a vengeance in the US and elsewhere. When Israel and the Jews are the ones gerrymandering elections in the US and elsewhere, not Russia.

The Jews love enslaving others to exploit them, and debt, taxes, finance, media, politics and academia are their tools. Taxes are unnecessary. Governments have the option of covering their operating expenses with income from state enterprises without taxation. Taxes, invasive, restrictive income taxes in particular are primarily for economic and social control.

England once banished Jews for about 200 years as you know. I have a dream :)

This is why I fully support the SAA and Russia! Because “the enemy of my enemy is my friend”! This is why I do not and cannot trust the SDF Kurds in this war as they are purely Jew puppets! I also have an affinity for Russian weapons and history! I was in Russia in December 2016 :) Place has improved since 2007 thats for sure!

And they’d love to improve it faster if the west would cooperate rather than be adversarial.

I got out of debt years ago. Everything that I own is paid for, real estate, heavy equipment, vehicles, everything. If I can’t pay for it out of cash flow or savings, I don’t buy it.

Me too. Its rather nice to be debt free. Its bad enough having to pay taxes for state borrowings that are pissed up the wall by government.

I live in a state without income tax and don’t file any state returns. The federal returns are bad enough. I’m working on dual citizenship in the Caribbean to get away from the federal returns as well. I have no desire to ever borrow money again. I live just fine without debt. Much better than I ever did with payments due every month.

I have information that SAA/Russia is doing their best to have Turkey exert influence on their proxies in Idlib and prevent escalation. It is still clear that Turkey is actively supporting the Idlib gangs and that the HTS takeover of Idlib is a clearfully planned move so that Turkey will claim in case of attack against SAA, that it is out of their power to prevent. The Source also said that no matter what happens on Idlib front, that Deir Ezzor operation will continue. This is because SAA/Russia is actively mobilizing and training more fighters as they liberate more and more of their land.