In the morning of August 21, the Syrian Arab Army (SAA) resumed its advance in the southern Idlib countryside and captured the village of Tar’i and its key hilltop from Hay’at Tahrir al-Sham (HTS) and its allies.

By capturing the village and its hill, army units are now 7km away from the Tiger Forces, which are stationed on the Damascus-Aleppo highway north of the town of Khan Shaykhun. 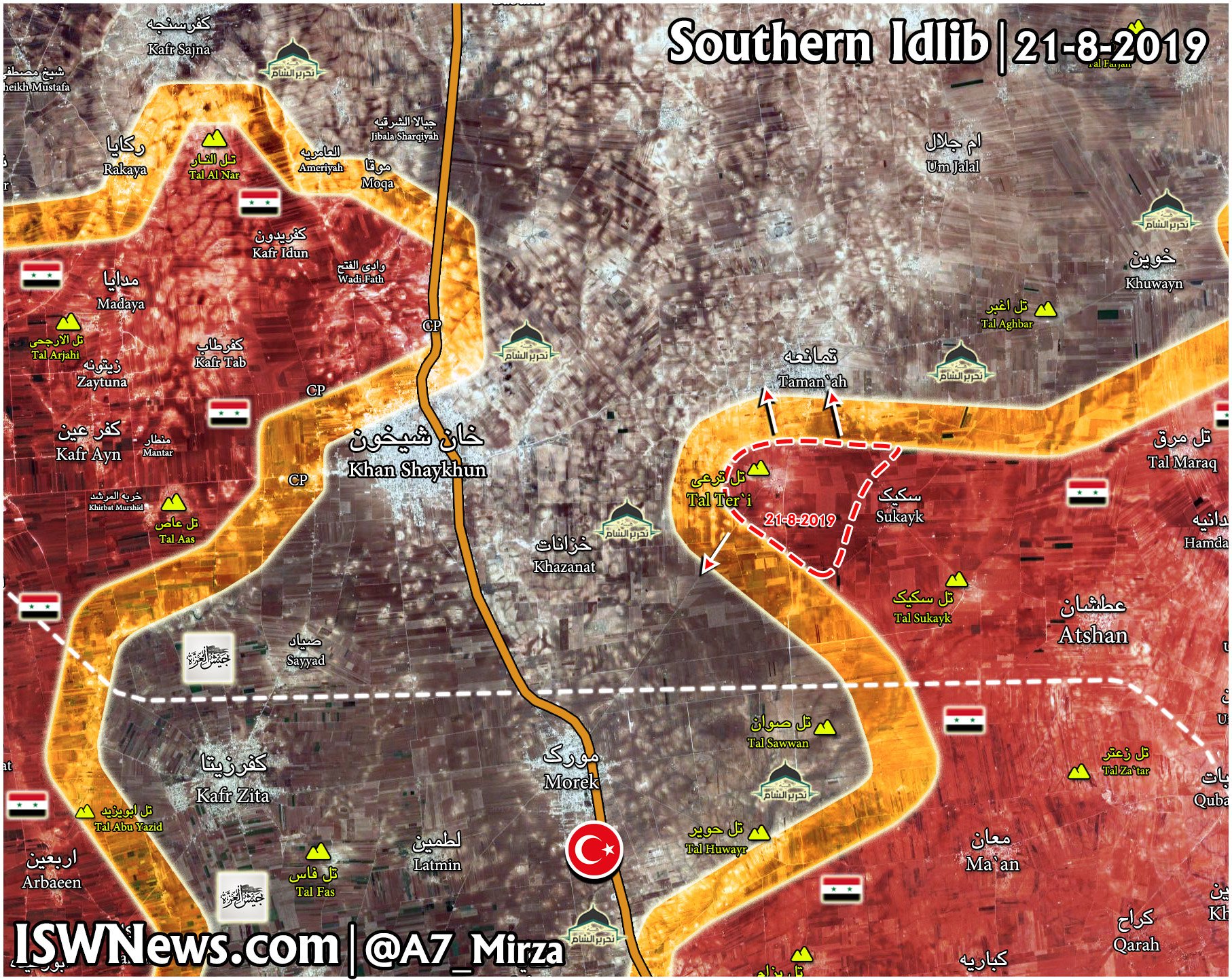 A day earlier, opposition activists claimed that militants are withdrawing from their enclave in northern Hama. However, these claims were proven to be false.

The SAA is carefully working to besiege the remaining militants’ positions in northern Hama. Hundreds of fighters from HTS and its allies are reportedly still hiding in the region.

With the army closing in, the fate of a Turkish observation post in northern Hama remains unclear. Ankara said it will not withdraw its post. However, the SAA is clearly determined to capture the entire region.

As I mentioned initially the key to a mega Turkey roast is to link up from Khan Sheikhoun to Tel Teir and have complete control over M5. I know the terrain in this region every well and its is ideal for ambushes as it is hilly and quite forested. Most of the smaller towns were inhabited by Wahhabi type scum who had been a pain in the arse for Hafez al Assad too, who during the 80’s simply bulldozed the headchoppers. The dumbass coward Turkeys are in a very precarious position and if the SAA and the Axis of resistance choose to they can inflict very heavy losses as the winding unsealed roads in the region are not fit for heavy armor and will face a Saudi fuckers style fate if the SAA unleashes Kornet hunter killer teams looking for Turkeys. In the southern tip of Lebanon where the Chouf blends into the Tyre coastal plain, the SAA Pink Panthers (special forces) in 1982 along with fledgling Hezbollah decimated the Zionist scum, the Turkeys in north Idlb and Hama are even more exposed and much more stupid. If Russia continues to dominate the air, the SAA can fuck Turkeys real bad. In any case the Turkeys are done sooner than later as their position is now untenable.

Time for roast Turkey then! I am not American so can eat Turkey any time. Lol

Well when the SAA fully secure the area around the Turkish post, the Turks can ‘observe’ the sovereignty that has been regained and then piss off.

Well done SAA, there is no reason Turkey should remain in his post the moment the region is cleared of terrorists.

The Turkeys are spread out in small platoon sized “outposts” to support their headchoppers and simply can not last long as their proxy headchopper terrorists have refused to put a fight so far. In Khan Sheikhoun the goat fuckers had tons of ammo in caves and underground bunkers built by Turkish army but fled as usual, despite being led by inept Turkey officers. But the major problem now is that there is nowhere to hide as the terrorist enclave in growing smaller by the hour.

I presume nothing spectacular will happen. Once the Turkish gawker post is surrounded they will be escorted out by Russian MP the M5 highway.

Exactly, the Turkeys are in NO position to take on Russia as the SU-35 episode showed. The moron ErDOGan overplayed his terrorist hand. Russian patience was tested to the limit.

What Turkey, or the UK and US for that matter, could do is seal off the Bosphorous choke point with a ‘maritime accident of some sort.

If all the NATO boats suddenly leave the Black Sea, its time for Russia to protect their supply lines to Syria I think.

The “key hill” will be the one that encircles those rats completely. People capable to kill unarmed women and children elderly people, torture prisoners, burn them live or cut their throats and heads off . Those animals do not deserve to live.

Must be exterminated to the last one.

Zionism = EVIL
Reply to  stupid is as stupid does

You are being kind calling these Wahhabi savage scum animals. They are totally debased vermin and every last one of them needs to be eliminated.

Great news! That hill top was pretty much what hold the advance up for a long time on that flank towards Khan Sheikhun! So the push towards it from the east can begin fater taking Taman ‘Ah (which seems to be under fire control from the hil top positions).