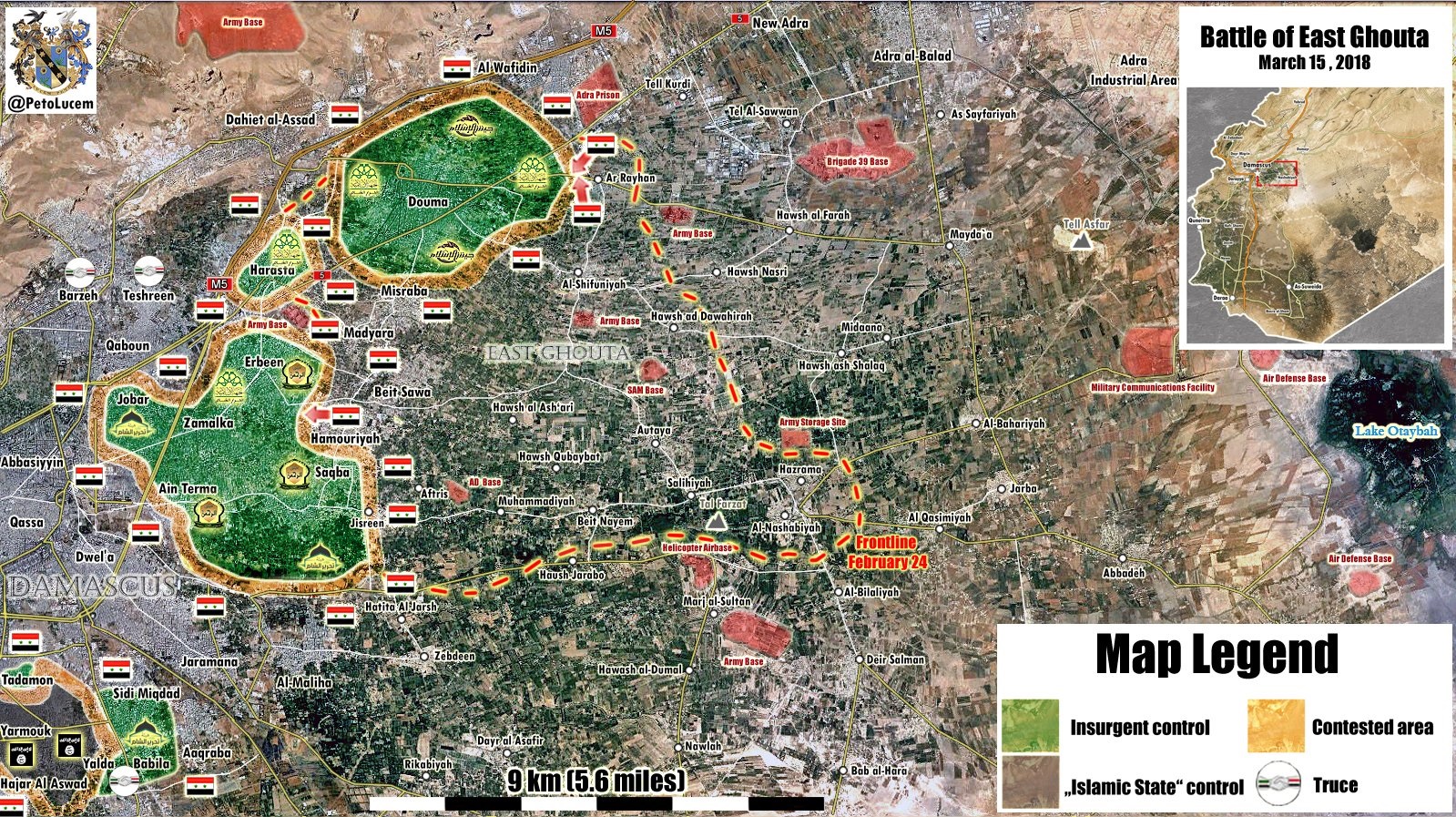 On March 15, the Syrian Arab Army (SAA) and the Tiger Forces backed up by the Russian Aerospace Forces captured the town of al-Rayhanah southeast of the Duma district in the eastern part of Eastern Ghouta from Jaysh al-Islam, according to Syrian pro-government sources.

The SAA and its allies reached the outskirts of the town of al-Rayhanah after they had captured the nearby Hawsh al-Mubarkha area on March 14.

Meanwhile, the Hay’at Tahrir al-Sham (HTS)-linked news agency Iaba’a claimed that HTS fighters had launched a counter-attack on the town of Hammuriyah in the western part of Eastern Ghouta. The town was captured by the SAA earlier.

The SAA will likely continue developing its advance in the western part of Eastern Ghouta towards the towns of Saqba and Kafr Batna. Riam Dalati, a BBC journalist, already confirmed that US-backed Faylaq al-Rahman is preparing to withdraw from Kafr Batna.

All news disseminated by Faylaq Al-Rahman about regime ‘using civilians as human shields’ in #Hammouriyeh are complete lies and fabrications.
Faylaq fighters had been planning a retreat since morning. #Kafarbatna handover is next. https://t.co/iGbrk8AKLW

THE POCKETS ARE STARTING TO GET SMALLER :) GO SAA

The pockets aren’t small, the Syrians got big! (With apologies to Norma Desmond)

Can’t wait 4 the retributions to begin

I want to see Jihadist heads on fences, nailed by the very civilians that these filthy goat fuckers have been terrorizing for years…

Not retribution, justice, it’s the Washington barbarians who do the retribution.

Now Just the mopping up of these Terrorists in the pockets as Douma will be the hardest since nobody woves dem. The SAA and Allies and Syrian Gov have no place to send the according to Jaysh al Islam leaders , just wonder if they will catch the Chemical Engineers from EU and Saudi Arabia.

Douma will be surrendered to the SAA. Harasta and Jobar/the southern pocket will be difficult to capture.

They are losing their “protective barriers and main defenses” meaning they are losing their civilian shields and since they haven’t set up any real defenses further in. Think it’s great that these uneducated Islamic terrorists are losing their equipment and heavy weapons in battle , would strip them naked of all their weapons and keep the serious offenders and hold civil court trials for murder and all heinous acts committed on the Civil population, then carry out the death penalty.

This was an important town. at least 10x was not taken in the last year. The terrain is good for defeat. Similar like that cam (palestinina?) in northern part of aleppo city. It was also hard to take. Now SAA has optimal place for local headquarter and can easily shell whole Duma. In souther part taking of Jisrin was important. now are covered also the SAA troops behind buidlings.

7th anniversary of this horrific war, the SAA kicked ass for that occasion :D

Kafr Batna, Saqba and the rest of Jisreen can now be encircled threatening yet another split up of the EGhouta pocket. Panic will set in at the jihadist camp and they will run for Ein Tarma, leaving behind yet again many things of interest and usefulness. Godspeed to SAA! On for victory against the satanic invaders.

Haven’t the stupid terrorists realized that they are already death yet ? if they do not surrender to Syria army. They must be completely drug.

my opinion… 1. Faylaq al-Rahman US proxy with imbedded Assets LEAVING! 2. JAYSH AL-ISLAM will be next to go after Faylaq al-Rahman (I believe J-A-I has best ties with Syrian govt, i even believe they may be a spy group for Syrian gov) 3. AASham Turkey proxy will leave last! 4. HTS will stay and fight to the end!