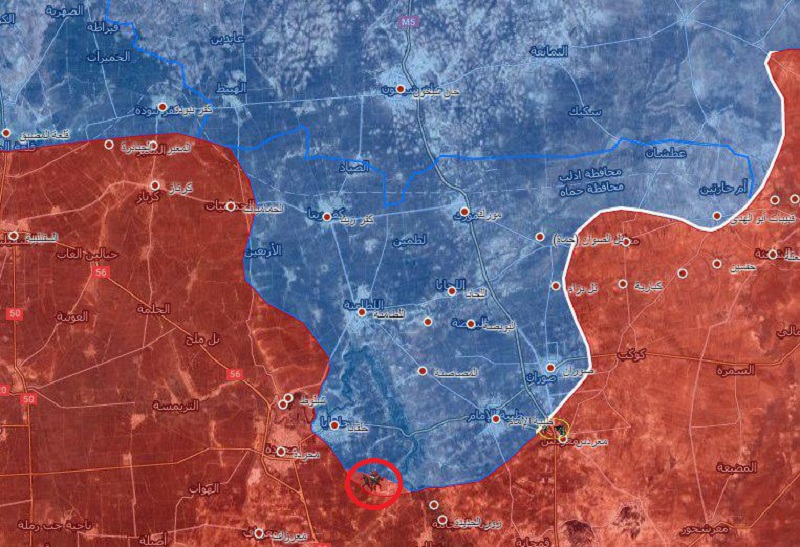 Al-Batish is marked with a red circle

Syrian Arab Army (SAA) units, led by the Tiger Forces, recaptured the village of Al-Batish and its hill in the vicinity of Helfaya in Hama’s northern countryside.

Soon after the seizure of the aforementioned vilalge, the SAA continued the operation in Helfaya where a number of points inside the town and its surroundings were been captured by government forces. However, the town itself remained contensed.

According to opposition sources, Hayat Tahrir al-Sham (HTS) declated that it was in control of Ma’ardes south of Souran. But local sources reported that clashes were ongoing there and the town remained contensted.

Menawhile, a 57mm gun belonging to the NDF was targeted by Fagot rocket in Mahardeh while a TOW missile targeted a T-72 tank in the outskirts of Helfaya.

According to loyalist sources, HTS targeted the Christian population of Mahardeh with dozens of mortar shells and missiles injuring scores of civilians and inflicting a large material damage.

The SAA will likely continue its offensive in northern Hama ignoring the most recent allegations of chemical weapons use in Khan Sheikhoun.

Of subject, sorry but the server of http://militarymaps.info/ is reported to be down. Anyone knows is this is true? Or is my ISP somehow censoring access .

Unlucky HTS retook all lost points south of Halfaya, including the village of Battish, Al-Tarabee checkpoint and Tall Battish https://www.almasdarnews.com/article/islamist-rebels-regain-upper-hand-northern-hama-full-battlefield-report/ I think that the imminent US intervention is causing defections in SAA

Or it could be SSA is drawing HTS forward to be cooked in a kettle? Or Jihadist in a jar?

I am having the same problems with military maps for several days now..