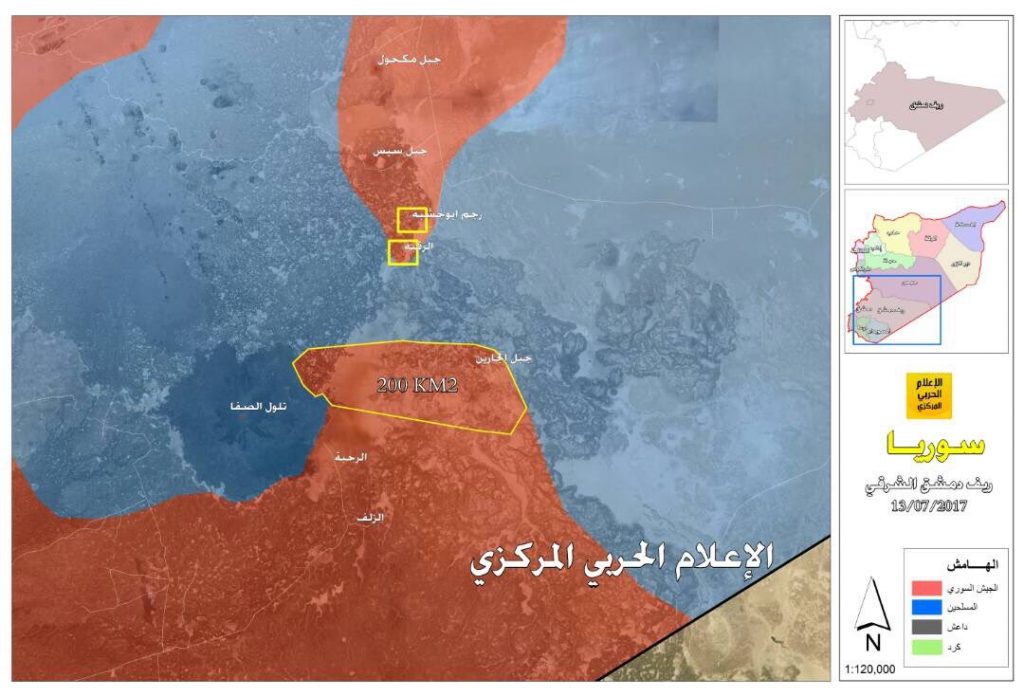 According to the Hezbollah media wing in Syria, the Syrian Arab Army (SAA) and its allies managed to advance 21 km from their positions in the French post in the Zulf area in the northern Suweida countryside on Thursday. The SAA reached the Jireen Mountain and captured over 200 square km.

Moreover, the SAA managed to captuer Khubrat Rakba, Abu Khashba and Tal Makhrouta south and southeast of the Sis Mountain located in the desert southeast of During the operation, the SAA reportedly killed and wounded a large number of Syrian Free Army (FSA) fighters.

From its side, Assoud al-Sharkia announced that the commander known as Abu Saddam is in a hospital in Jordan after he was wounded during battles with the SAA denying rumors about his defection.

He was wounded in battles with the Syrian regime and is currently healing at a hospital in Jordan. pic.twitter.com/8Yn3uJkGsr

It seems that US-backed FSA groups will be pushed to withdraw to the US military base at At Tanf  near the Syrian-Iraqi border. US-backed groups were unable to repel the SAA attack that destroyed their bases in the Damascus desert, and most of their equipment and resulted in killing and wounding of a large number of FSA fighters.

It’s expected that government forces will be able to recapture the whole desert area east of Damascus in the coming days, thus securing the capital and cutting off the supply routes from Jordan to the Eastern Ghouta and Eastern Qalamoun.

Such is the nature of today’s twitter based news reporting. Too much posting twitter posts as news, not enough fact checking to see if its actually true.

but similar was also in the map in todays syrian war videoreport. :(

but hopefully you are right

Yeah claims have to be taken with a grain of salt, each side exaggerates gains and minimizes losses.

hahahhah i laughed maniacally when i read how the SAA destroying their bases and killing so many FSA, and that i wished this FSA leader died instead of healing, am i becoming a psychopath? i hope not, i just hate these US backed militias and their threatening a sovereign nation like this.

Mm i wonder if they captured their TOW missiles and what other gear they found,. awesome news.

Great news! The relevance of the Jordanian border as a supply route is becoming minimal. Slowly but surely the options for support for the “rebel” jihadists are being taken out of the equation. Smuggling weapons for long distances is not viable. This fully supports the effort to take back East Ghouta. Very good moves whoever designed them. Note that Lebanese border is similarly being taken care of.

I can only come to the conclusion that the Syrian opposition does not attract any type of forward-thinking people, it’s been painfully obvious since Aleppo, that the SAA, bolstered by the Russians will defeat all before them, no matter how long it takes, anyone can see the US is only using the opposition in the south to slow down the SAA so the US & it’s allies can advance in the north east. None of the FSA fools seem to understand they are being used as cannon fodder and the moment the US position in At Tanf is open to attack, the Americans will bail out, leaving the FSA to their fate.