On Saturday, the Syrian Arab Army (SAA) and Hezbollah captured most of the city of al-Bukamal, according to the Hezbollah media wing in Syria.

The media outlet added that the SAA and its allies are now conducting a security operation inside the city to secure few remaining areas.

The ISIS-linked news agency Amaq didn’t publish any news from al-Bukamal city on Saturday. This could mean that the entire city was under the control of the SAA and Hezbollah.

The rapid advance of the SAA suggests that ISIS members had been able to withdrew from al-Bukamal, likely through the Euphrates River. ISIS fighters likely move towards the Nineveh Desert west of Mosul city, inside Iraq. 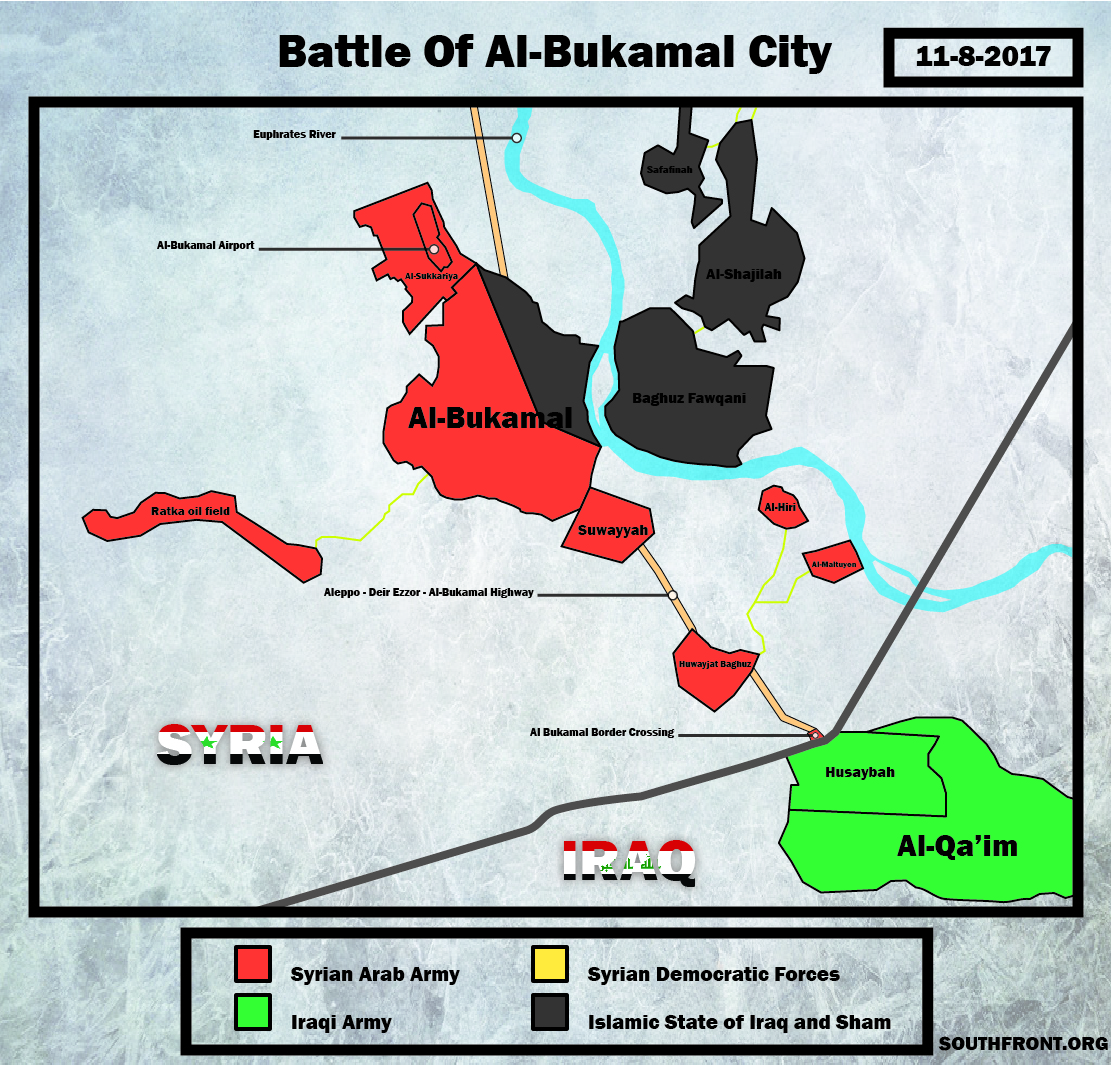 Al-Bukamal was the last stronghold of ISIS inside Syria. It’s one of the most strategic positions on the Syrian-Iraqi border. Now ISIS controls only few villages along the western bank of the Euphrates, north of al-Bukamal and an empty desert area in the eastern Homs countryside.

UPDATE: The videos released online allow to confirm that the SAA and its allies have reached the roundabout, the watertower and electricity station. 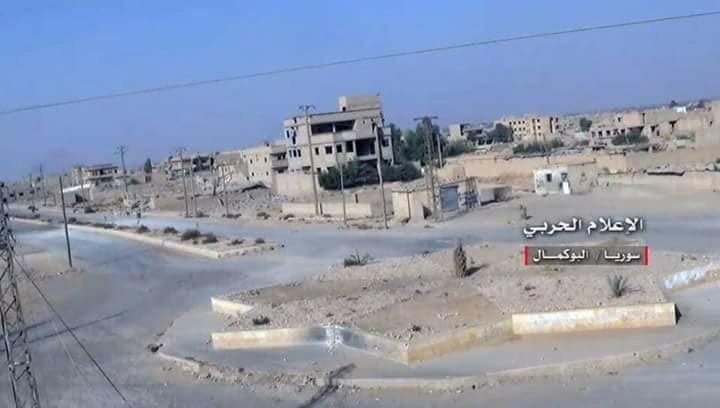 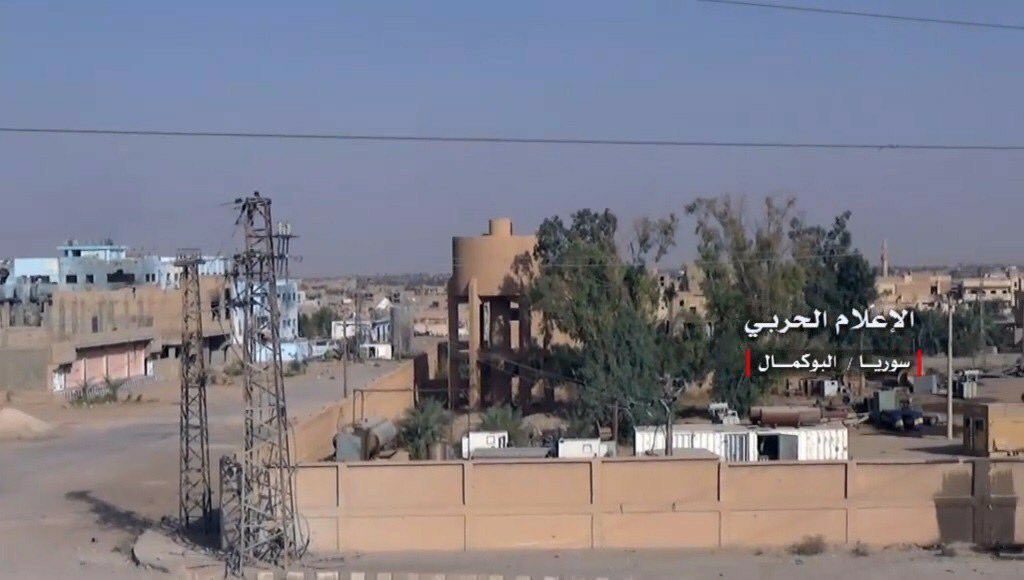 Congratulations to the SAA on another great victory.

I wonder if the SAA will again cross the Euphrates to further consolidate the border zone with Iraq ?

I don’t think so bcuz they have to clear first all of dier zor desert area. then move on to hama/idlib or Damascus to get rid of those HTS and Fhalaq Rahman terriorsst. eastern will be deal bySDF thugs . then later SAA will deal with SDF thugs.

Considering that a part of Al Bukamal seems to be across the river it might be prudent to cross the river to capture those parts as well. Just like they did in Deir Ezzor. The fact that it creates additional buffer between them and the SDF is extra bonus.

If its possible is another issue. It would require bridging equipment that the southern advance axis doesn’t seem to have. Unless the same Iraqi PMU that attacked from Iraq can use the Iraqi bridgeheads across the Euphrates that the Iraqi army has taken.

There are two bridges crossing the river at al-Bukamal. I don’t think both are destroyed.

Thwy can build largw ponton bridges in the matter of the day.

If SAA does not do this, there is a big probability that lost again Al Bukamal.

Go SAA ! And Hezbollah are incredible. Hezbollah is the alpha and omega. [ And I nearly missed this since another Southfront post came in soon after. ].

Lets hope they can keep hold of it this time!

Well Congrats for 3rd time tho. Maybe 3rd time is a charm.

Hezbollah’s reporter and photojournalist Muhammad Yahya (Mo’men) was killed in BuKamal. Many of Hezbollah’s field reports (E’lam al-Harbi) in Syria was his work. He was 23 years old, married and had a child. Rest in peace hero.

That’s a bit different than hard work (it must be painful to constaly spreading BS) in MSM. Rest in peace brave hero. You father should be proud of you.

It looks like a lot of them have head cameras. That’s on my to do list for future ET contact ops to augment my smart phone. A lot of which are at night. So my cameras need to have night vision or strong lighting, or both.

This is a smart phone mount that I’m planning on including for the 30-06 build that I’m doing for contact work. There are usb thermal and infrared sensors available that could help if I run into ETs using cloaking technology:

Don’t know about ET ops but you can turn almost any commercial digital camera into an infra red camera by removing it’s IR filter (something like a thin layer of jelly in front of sensor or behind the lens). It can be easily done on webcams and there are all kinds of DIY to achieve this. You can turn your camera and build an IR flashlight very cheaply.

Thank you, I’ll research that. The newer smart phones have IR built in on some models that you can turn on by changing the settings or downloading an app. If I’m picking up audible activity or motion that shouldn’t be there and am unable to obtain visible confirmation of what’s causing it. Then I may be dealing with contact involving cloaking technology.

One of the high activity areas where I’ve run contact ops is the Skinwalker Ranch, Dark Canyon(s) area in NE Utah. Where I found a large animal mutilation, an elk, a couple of miles east of Dark Canyon east. This is a photo purportedly taken at the ranch by a researcher:

“… witnessed this at skinwalker. (Even have a picture of the creature, taken by another researcher, on my website as it exits the dully glowing portal).”

This is a picture of the ranch entrance:

Watching the second part of Lord of Syria trilogy coming to an end, I can’t help but being scared for the well being of the good guys in the next episode. But as in the original, the showdown with Zioron is quite inevitable. Welcome to the last sequel of Syria’s fight against The Great Evil. Let’s hope the author sticks to the original template – although Good doesn’t always win outside fantasy novels…

Haha. So that would make ISIS Isengard and the FSA Mordor? I guess Russia and Hezbollah would be Rohan?

Yes, they need to cross the river, but….are they willing to do it ? are they allowed to do it ?

Hi guys, I came up this footage of Alligator KA52 gun ships making a feast of ISIS at Al-Bukamal. Enjoy! https://www.youtube.com/watch?v=D0T0Q9zWKl4