On September 9, the Syrian Arab Army (SAA) and its allies broke the ISIS siege on Deir Ezzor Airport and Harabesh district in the southern part of Deir Ezzor city after capturing the cemetery area, according to the Syrian Ministry of Defense.

The SAA destroyed several vehicles of ISIS and killed dozens of ISIS fighters south of Deir Ezzor city during its advance, according to the Hezbollah media wing in Syria. The Syrian Ministry of Defense also reported that ISIS fighters are now fleeing the area leaving their weapons and equipment behind.

By this advance the SAA is now on the verge of encirclng ISIS units that had besieged in Deir Ezzor city for about 3 years.

The SAA next goal will be to take control of the strategic Thurdah mount southwest of Deir Ezzor Airport. In a related development, the ISIS-linked news agency Amaq claimed that 40 Syrian soldiers were killed in an attack of ISIS on Humaymah village in the eastern Homs countryside. Amaq claimed that ISIS fighters destroyed 5 positions of the SAA around the village.

Moreover, Amaq said that ISIS fighters captured a vehicle armed with a 23mm gun and 7 Anti-Tank Guided Missiles (ATGM) with two launchers during the attack.

ISIS attack on Humaymah didn’t effect the ongoing SAA offensive in Deir Ezzor city. This proves that SAA is once again capable of operating successfully on more than one front.

SAA has enough weapons but has no enough man power. In 2015 when Russia has stepped in on request of Syrian government then at that time they should have at least 600,000 troops. At the moment SAA have total strength of 300,000 consists of land, air and navy forces.

Rob, SAA and allies are advancing at GREAT pace. See Racaa where SDF and USA ca´nt liberate the city after months, with great losses of manpower and civilans bombed by the US planes every day. And it is well known that the best and experienced ISIS soldiers went to fight in DZ. So marvellous militar and political action of Siria and Russia !!

and recently due to Syrian government and their allies forces advance in Deir Ezzor the US and Co have increased air strikes on Raqqa city and murdered hundreds of civilians and hundreds are under the rubbles. I know this but if the strength of government forces would high then we would see that how quickly this war reach to its end. Anyway thank you for you reply.

The US is fast becoming the most hated and reviled nation in the world and it’s allies are getting tired of it lying about an aircraft demarcation line which the US has openly violated for years.

There should be fewer defections now. Few are willing to join the losing side when the war is winding down.

It is an intimation for all Syrian government army and their allies that Trump and Co is ready to air strike on you as you cross Euphrates river. I don’t know this is propaganda or correct information.

Ryan Dillon says that we have already divided Syria in several parts on agreement with Russia.
The line of demarcation in Deir al-Zour, was carried out by agreement between the United States and Russia at the end of 2015, to separate their areas of action in Syria and to prevent accidental collision. Does America has this authority to negotiate the division of any sovereign country like Syria or America have become a mad dog?

The usual obfuscations and twists of reality by the US. No Russian split Syria with them , they simply project their own illusions , wishful thinking & paranoia , trying to convince others that they are serious. They hope to get something out of nothing. Nobody is fooled anymore.

There is no agreement after continued US and NATO air strikes on Syrian coalition. Expect a vertical envelopment with embedded Russian Special Forces. The Syrian coalition has practiced and executed successfully for just this reason. Russia will be protecting this and Putin has already prepared the response verbally and he is a man of his word.

Note the latest attack from Israel was from Lebanon skies not Syrian.

Thanks for your reply. Actually Israeli refugees in Palestine and in America manipulate the statements to deceive the world communities.

Yes, and the Israeli plane probably used the deep valleys of Lebanon to approach below radar. The flight of the missiles approx. 60km, so they are afraid to approach Syrian sky even now. Ground missiles that fly 60km are a lot more expensive than bombs, even JDAM bombs, so those kind of strikes won’t be attempted too often.

When they entered Tabqa and Al Tanf they broke that deal also by striking on the other side of the Euphrates which this was only for Aircraft and not ground forces , why does the US extrapolate on everything. The US is an illegal ground force there and were not allowed in the region and need to withdraw or be on a collision course , of turning into the most publicly hated and reviled nation on the planet.

See? what I tell you they joined the two bits together.

For a greater bite and you will see that they will cross north of Deir Ezzor the Euphrates to keep the eastern parts against the fucken US and their ground boots, the kurdish gypsies. 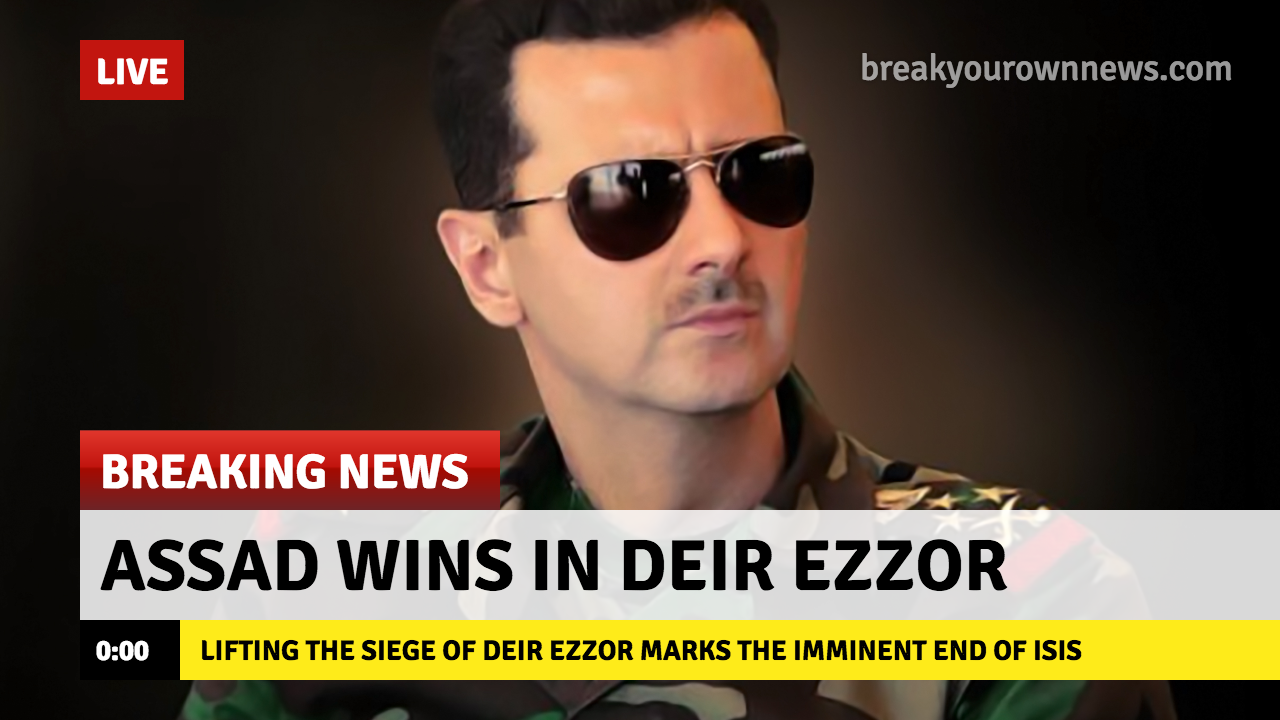 What exactly is in that dark area to the northeast? What type of buildings, shops, or etc?
KiraSeer

Those dark areas are residential Neighborhoods like any you see near a cemetery or near them, but these ones are in control of Islamic State of Iraq and Sham. The word Sham is a reference to word “Golden” many use this to describe the Khalifa as Sham, but it is all a scam.

I’m talking about the area around Saker Island—Could there be more warehouses, tunnels?

Is there commerce on the Euphrates? You have an airfield, then Sakr Island, then the river. And highways. Is the oil conveyed ONLY on the highways? To the Mediterranian or to the Persian Gulf?
IS is losing because it no longer has control of commercial routes.

Thank you, God, for Commander Issam Zahreddine. He will get a medal. A well-deserved one.

Much of the Pipeline infrastructure has been destroyed by US bombing it, they added oil from Iraq which didn’t violate anything except all the illegal sanctions imposed by the US. Currently Iran is working on ways to improve Syria’s power shortage by building power plants to produce energy. Russia is trying to help with their gas and oil. Looks like much of the pipelines in the east are damaged and they were shipping it via roads.

IS used oil convoys. Which convoys were bombed by Russian pilots, to the consternation of Americans, who handed out leaflets warning the convoy drivers they were going to be bombed.
America has had little to do with Assad’s success against IS. I will grant you, though, that the U.S. at least had the good sense to help the Iraqis in their battles against IS.

They are fleeing. To where? The desert or the river?
KiraSeer

They fled through the pocket that is open since the region can’t be fully closed yet from Thayyem, the City they’re trapped and have the river at their back. The problem is ISIS used a great many locals who have laid down their arms and even the hardcore ISIS members have left their arms and fled. This is the best type of morale demoralizing tactic is to let them flee it creates widespread panic in even the most veteran forces in the world.

Great video, thanks for sharing.

Those poor bastards from the local militia just couldn’t believe that they’d been liberated. That’s what four years of war will do to you. Hopefully their sacrifices will be rewarded in years to come.

It does, turn on annotations then auto translate from Russian to English.

Nice one, sometimes the translation from Russian to English is a bit seedy especially when they are useing poetic language that doesnt translate but they have done something recently that makes it come through perfect.

ANNA news doing amazing work as always, beautiful film and im glad they captured that historic moment that was missed by the media due to the greed of one Syrian reporter.

No one will forget the footage of the lone tank at 24:40 closing the last mile to Deir Ezzor and ending a 3 year long siege made possible by drone technology.

ISIS fighters are now fleeing the area leaving their weapons and equipment behind—-
Good we’re git’n our shit back.
This is the 1st time I’ve been on this website, I like it and I especially appreciate the fact that I can post comments without having to have a F-ing face Book account. I don’t understand why so many Conservative websites require a FB account to post a comment. That seems stupid to me.
Keep up the good work!

I do not see night vision helicopters helping ground forces. This russian help is of great importance ¿ where are they ? why do they have so few helicopters ? There are some videos that even there is not Russia air power support at all. Right now, SAA forces needs to cross Euphrates river to stop SDF (USA) forces, and they will need very strong support from aerospace russia force. I hope the continue providing this support ant even increase it a lot.

A New Hole in Syria-Sarin Certainty

Special Report: A new contradiction has emerged in the West’s groupthink blaming
Syria for an April 4 chemical attack, with one group of U.N. investigators
raising doubt about the flight of a Syrian warplane, reports Robert Parry.