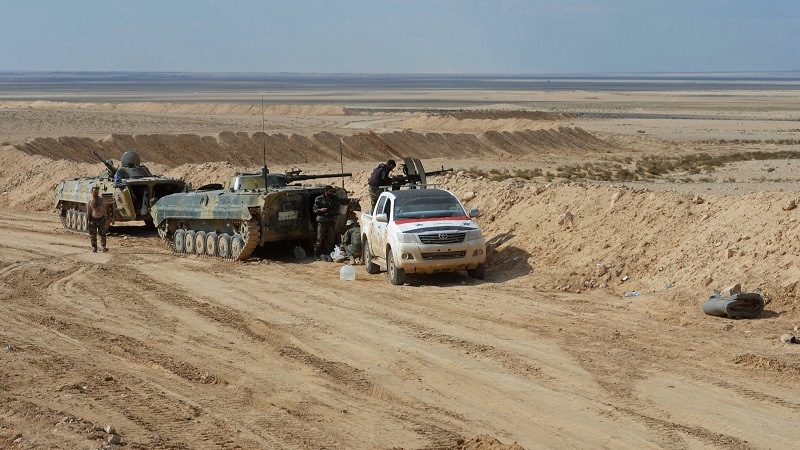 The Syrian Army, supported by the Russian Aerospace Forces, has continued a push towards the ISIS-held city of Palmyra after almost a week of positional warfare against ISIS terrorists at the Homs-Palmyra highway.

Over last week, aircraft of the Russian Aerospace Forces carried out over 90 sorties in support of the government advance.

Now, government forces are in less than 20 kilometers away from Palmyra, according to the Russian Defense Ministry.

“Syrian government troops, backed by Russian air support, continue to advance in the direction of Palmyra; less than 20 kilometers are left. The Russian Aerospace Forces carried out more than 90 sorties over the last week,” the ministry said, adding that the Syrian army has destroyed 180 terrorist targets, including 43 armored vehicles as well as jeeps with heavy machine-guns.

Since February 7, government forces have liberated a few inhabited localities and now are in control of 22 square kilometers in the vicinity of Palmyra.

Roman Syria was invaded in 252/253 (the date is disputed) after a Roman field army was destroyed in the battle of Barbalissos by the King of Persia Shapur I which left the Euphrates river unguarded and the region was pillaged by the Persians.

In 259/260 a similar event happened when Shapur I again defeated a Roman field army and captured the Roman emperor, Valerian, alive at the battle of Edessa. Again Roman Syria suffered as cities were captured, sacked and pillaged.

So…it’s not just the Jews with angst about Persia being nearby,…..Rome is kicking chairs As history reminds them about how far Empire could extend. Teutoburg Forest Germannia 9CE…3 Roman Legions massacred. ..said to be Romes greatest Defeat,…..a turning point in world history.

Interesting that In Syria….Persia and Islam square off against Romes ancient expansion boundary.