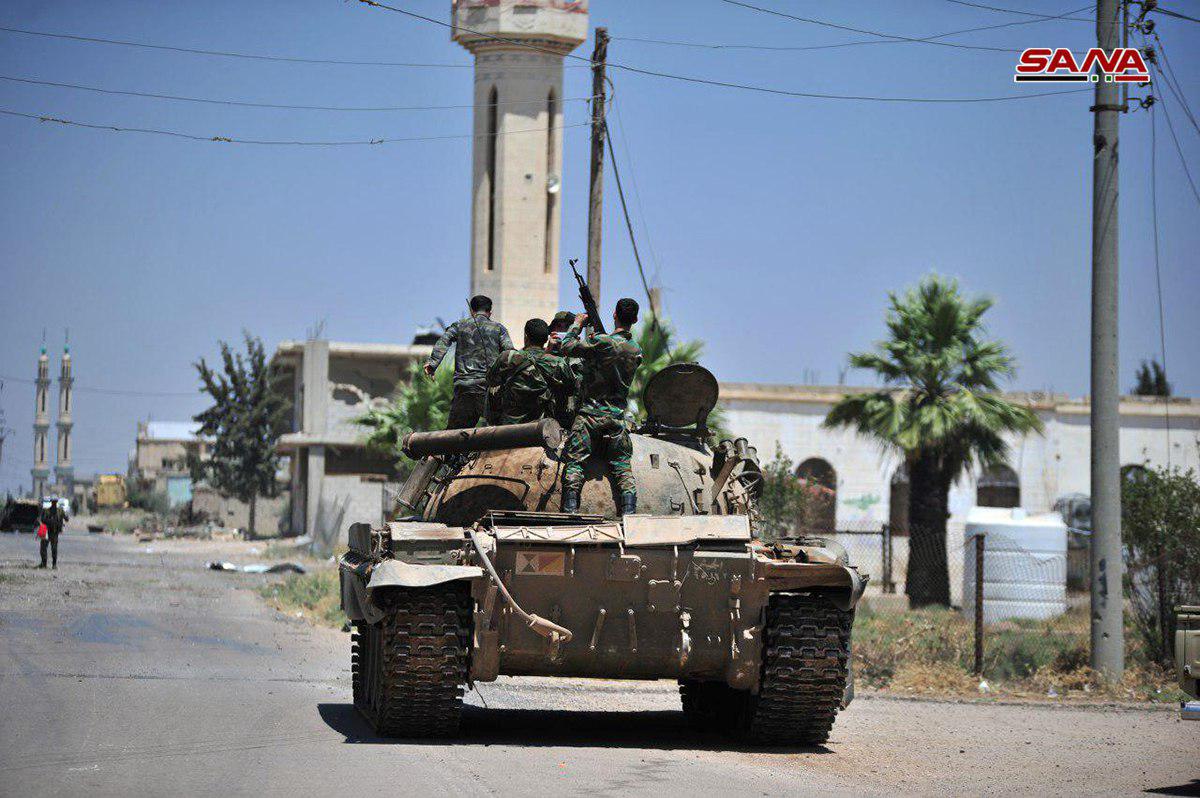 On August 4, a source in the Syrian Arab Army (SAA) told SouthFront that the SAA reached the town of Haman in the framework of its ongoing security operation against ISIS cells and smugglers in the area of al-Lajat, in the northeastern Daraa countryside.

The Syrian Observatory for Human Rights (SOHR) reported that the SAA has arrested more than 320 suspects since the beginning of the security operation.

The Tiger Forces and former fighters of the Free Syrian Army (FSA) are reportedly taking part in the security operation, which began on August 2. Furthermore, warplanes and helicopters of the Syrian Arab Air Force (SyAAF) are carrying out reconnaissance sorties over al-Lajat.

Over the last three years, ISIS cells in al-Lajat smuggled weapons from the opposition-held areas in southern Syria to ISIS in the northeastern part of the country. These cells were also involved in illegal oil trafficking from ISIS-held areas.

Once the security operation is over, the SAA will declare al-Lajat a military zones and establish several bases in it, according to pro-government activists. This step is aimed at securing southern Syria and countering the influence of ISIS there.

I wonder how much input the Russian spec forces had in detecting these guys.

Not much, some of them dont bother to shave.

No one accused them of being intelligent, look what they have wrought on the country is that not easy to see.Stupid begets stupid.

Are you talking about the Russian forces ?.

Hush, baby, hush. The jews are bitching. Don’t interrupt. Have fun instead while they cry over their losses. Well done SAA!

it’s just the drunkest guy, sitting in a corner and waking up intermittently, speaking a random phrase and then falling back asleep.

Whom do you mean by “them”?

The Russians wouldn’t know anything about them. That’s why the SAA brought in former FSA soldiers from that region since they’ve done business with them in the past.

Yes jesus dont have a victory celebration and let your guard down. Thats how you get surprised.(al suwayda?)

If the fuckers werent let into israel or jordon a lot must be hiding around.

One of the great success stories of the Syrian war. Has been the ability of the Syrian government and it’s coalition partners to hold recovered areas and return them to normalcy.

Christian Zionists, who are mostly evangelicals, are a protestant sub set that is worldwide, but only a significant political force in the US. Where they comprise about 25% of the population. They are concentrated primarily in the south eastern US in an area commonly refered to as the bible belt. Catholics and mainline Protestants are much less likely to support Israel:

“Evangelical Christians make up the biggest pro-Israel bloc in the US. Support for Israel is stronger among American evangelicals than it is even among American Jews. According to a poll conducted by the Pew Research Center, 82 percent of white evangelicals think God gave Israel to the Jewish people. Less than half as many Jewish Americans or Catholic Americans agree.”

– Why American evangelicals are a huge base of support for Israel –

Jews are an invasive parasitical disease, enemy’s of the state, and a subversive internal 5th column national security threat. Their grip on power in the US goes far beyond support from evangelicals. Their control of the media, campaign funding, finance, etc. isn’t effected by Christian Zionist’s support or lack there of. Christian Zionists could disappear tomorrow, and it would have little effect on the evil Jew’s control of other aspects of the American political process. Yes Jews cultivate Christian Zionists and that’s a contributing factor to their control of the US government, but it isn’t the primary factor.

We need to keep in mind that the percentage of Evangelicals among voters is not particularly relevant. The percentage among Trump voters is the key and that is very high. Trump will reward these “Christian” Zionists, just as he did by making Jerusalem the capital of Israel. In biblical Christianity, that is nothing short of blasphemy. Jesus wish for his followers was that they should evangelize among the Jews. Instead Christians back Judaism and make Jews feel as if they are welcome back in the land where their God banished them for disobedience. This is stupid and cowardly and these fools have a higher percentage of pro-Israel voters than Jews as a whole!

Christian Zionism has no effect on the Jew’s control of the media. Which they use to advance their demonic agenda of perpetual war, Zionism and other criminal hegemony machinations. https://davidduke.com/wp-content/uploads/2017/07/CNNJewMeme-e1499356599174.jpg

Without the CZs, AIPAC would be recognized as an illegal foreign lobby. Pastors like Hagee are all over the US preaching that Israel is the Holy Land and its resurrection as a nation is God’s will. If they had a third grade reading ability they would realize the Bible does not want Christians to bless the secular genocidal nation called Israel. Jesus said he would not come back until they accepted him. Fake Christians ignore that to their peril and vote for devout Zionists like “Christian” Mike Pence.

How does a regional political block from 25% of the US dominate the other 75%?