The Syrian Arab Army (SAA) and its allies have launched an intense bombing campaign against fortified positions of terrorists in the vicinity of Aleppo city.

On January 16 morning, the army’s artillery began pounding terrorists’ positions and fortifications in the northwestern, western and southwestern outskirts of the city’s center.

The Syrian Arab Air Force (SyAAF) and the Russian Aerospace Forces (VKS) are also carrying out airstrikes on these regions. According to the UK-based Syrian Observatory for Human Rights (SOHR), the towns of Khalsah, Khan Tuman, Kafr Naha and Anjara were targeted.

Earlier, a military source told the Syrian Arab News Agency (SANA) that al-Qaeda-affiliated Hay’at Tahrir al-Sham (HTS) and its allies have intensified their rocket attacks on Aleppo city, warning that the army will respond.

In the last few weeks, the SAA amassed a large force, including the elite 4th Division, around Aleppo city. Many reports speculated that the army is preparing to launch a military operation in the region.

The ongoing intense strikes on the vicinity of Aleppo city suggest that the army could launch a ground operation there in the upcoming few days. Earlier this week, HTS sabotaged a ceasefire which covered the region. Thus an operation is once again possible.

So these terrorists that are getting smashed now in Idlib by Assad are those that couldnt catch the flight to Libya….
Such a pity…boohoo
I blame Erdogan, he shoud be asking Merkel to send him a few more billion euros….those jihadis arent cheap you know!

Assad must stay
Reply to  ©igare☘☘e?Sm⚽️k?ng?Man️?

Hahaha indeed. I think this is it. No more so called ceasefires. The liberation of entire Idlib and West Aleppo awaits. Erdocunts puppet army will be defeated. No more white helmets. No more moderate headchoppers. No more green busses. Red paint only. Whooohooo! 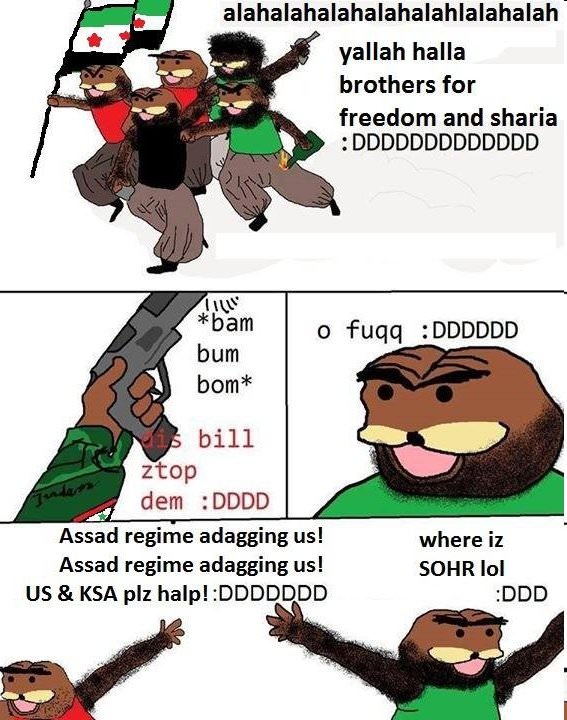 Here’s some very interesting info about HTS and their allies, it’s not current news but gives you an idea on what the situation is really like for HTS now.
And it seems with this motley crew, just hoisting the wrong flag is enough to start a civil war amongst their members, and that’s on top of the insurgency against Assad they cooperate in, so they’re all fighting 2 wars at the same time, LOL, It’s a miracle they’ve all lasted this long.
….

“Hell” – so the SAA and her ‘allies’ think they fight a religious war, one where they execute divine retribution? How are they different from the rebels, then?

Secularist or the Syrian government’s inclusion of secularism, indifference to or rejection or exclusion of religion and religious considerations in civil affairs or persecution or prosecution of. If I have to explain why the jihadist ie isis if different, then a little more research may reveal the missing ingediants.