Units of the Syrian Army, backed up by the country’s air force, have launched a new series of attacks on positions of terrorists of the Islamic State group in Deir ez-Zor. 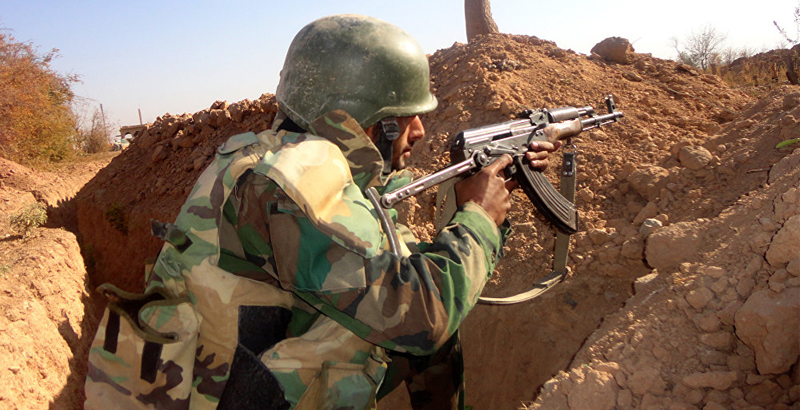 Syrian troops, backed up by the country’s air force, heavy struck positions of terrorists of the Islamic State group, stationed in Deir ez-Zor and its surrounding areas, in order to break their siege of the city’s airport.

IS positions and gatherings in Sorieh Juneid, al-Mohandesin, al-Ma’amel, Tal-e Maqaber, the Electricity company, Hill 17, surrounding areas of the al-Maqaber cemetery, Lawa al-Tamin and the Deir ez-Zor airport, as well as on the al-Thardah mountains, were pounded by Syrian fighter jets. As a result, terrorists suffered heavy losses.

At the same time, the Syrian Air Force also hit terrorists’ positions in al-Ma’amel region in Deir ez-Zor city, the villages of al-Hosseynieh and Hatleh, located in the eastern part of Aleppo, as well as Ayash village to the west, and northern and eastern parts of the airport. A number of terrorists were killed and wounded in the airstrikes.

Meanwhile, missile and artillery units of the Syrian Army targeted positions of IS terrorists, stationed in al-Thardah region, the Sanouf heights and surrounding areas of the cemetery. As a result, several terrorists were killed, while their military vehicles were destroyed.

On Wednesday, the Syrian Armed Forces continued their military operation, aimed to break the siege of the Deir ez-Zor airbase. Syrian troops, backed up by the country’s air power, struck IS positions in al-Thardah, Talat al-Sanouf and al-Maqaber regions, as well as on Hill 17, killing and wounding dozens of IS terrorists and destroying their several military vehicles, equipped with machine guns.

At the same time, the Syrian Air Force carried out airstrikes on terrorists’ positions in the areas of al-Arazi, al-Arafi, al-Hamidiyeh and the power department near al-Ta’min brigade. Several IS militants were killed and wounded.

On Tuesday, Syrian troops launched a new series of attacks on IS positions in the southern outskirts of Deir ez-Zor city in order to raise the siege of the city’s military airport. In addition, the Syrian Army also intensified its offensive on defense lines of IS terrorists in the area of the al-Maqaber cemetery, located in the southern outskirts of Deir ez-Zor. As a result, a number of terrorists were killed and wounded.

Also reports of ISIS shot dead or drowned while trying to cross the river in boats. Just like killing sitting Daesh ducks in a pond? I guess this will happen when you no longer have any bridges. The front lines have not moved at all. But the SAA is satisfied with just sending them to hell !

Just keep attacking and most will run away. Just ask the Kurds.

All I read is that lots of ISIS dudes got killed, but nothing about crucial ground being taken from them. So if I read between the lines that means the attacks were basically a failure and this is just spin. Just like Vietnam where the Americans were saying they were killing Vietcong by the bucketload. And then they got hit by Tet. Or NATO in Afghanistan which kept saying we’ve killed so many Taliban, and opened this many schools for girls. And now half the country is under Taliban control again.

I’m probably just being cynical, but every time I read triumphant reports that basically only says we killed a lot of …… but took nothing I smell spin to cover up failure. And that makes me sad. Cause I want these guys to win.

Simple answer to your comments: Aleppo, Palmyra, Manbij. Get the picture?

And how many years did it take SAA and YPG to win them back? Not so simple comments after all. Picture of Syria is still murky.

You do understand that the “moderate” head-chopping opposition has been supported by the US/EU/NATO/GCC Borg Collective and Jihadists from 50+ countries? Backed up by the special forces of US/UK/France/Australia/Israel/Jordan/Turkey? You do remember their “Assad must go” campaign, don’t you? Before the Russians were called in, there was a real danger that the ISIS flag would soon fly over Damascus, with the full support of the “superior and civilised” west. For a rejuvenated Syria it is next stop Raqqa and then Deir-Ezzor. Then the US/EU/NATO/GCC invaders will be roasted if they do not leave.

The rapid advances since then bear out my point above.

It’s a war of attrition so exchanges of ground aren’t always the point. Fighting the US head-chopping, heart-eating rapers where they will stand and fight makes it harder for them to retreat to areas difficult to attack.

With American troops , not special forces , moving into Manbij , Russia is being foolish not securing Deir Azzor . If the Americans see weakness or hesitation , they will swoop the city on the east side , leaving SAA , with half , but them having the oil fields just south . With Manbij and Deir Azzor , the Americans have their little “Sunnistan” or what ever they wish to call it . Do not loose this war just when you are about to win it .