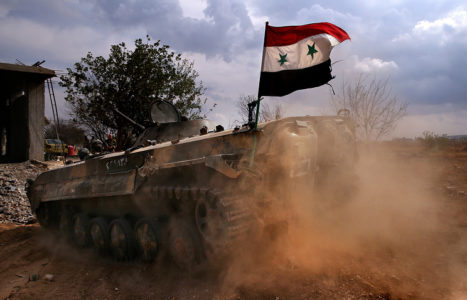 The Syrian Arab Army (SAA) and the Syrian Air Force (SAF) have engaged ISIS targets in the desert area in eastern al-Suwayda (also known as Sweida al-Badyia), according to pro-government sources.

SAA and SAF strikes reportedly targeted positions of ISIS terrorists in the areas of al-Waer, Ard al-Karaa, Mazrea al-Hhatib, Sneim al-Ghirz and east of Dabatheh, Rabbet al-Hisn and Tel Razin. These points are located 15-30km deep inside the desert area.

The Syrian state media claims that ISIS recently suffered notable causalties in exchanges with the SAA. However, no photos or videos confirming these claims have been provided.

ISIS cells were especially active in the province of al-Suwayda in middle-late July and early August when they carried out a series of attacks on government targets there. These attacks forced the SAA to contribute additional efforts to combat the terrorists hiding in the desert area.

World_Eye
Reply to  MADE MAKER

Anybody knows when there will be general elections in Syria. The candidates must have at least PhD degree, speak English and patriotic and should be not from current government or rebels or from Kurds separatists and should be not puppets of US, NATO or Israel.

And where is our general Suheil? Did anyone saw him? Maybe he prepare Idlib operation?

He and his men could also be having a well deserved rest for a few weeks.

arm the druze and let them take revenge they solve the problem.

Well the Balkans are heating up as you expected. Southfront posted an article that you should look at if you have not already.

Unfortunately general Issam is no longer with us..he would fix this scumbags problem in one day…

Go sweep the desert, please. Go get them bastards. Nevermind Idlib for now.

Just one week is needed to get rid of all of these terrorists in this area with the strong support and protection of Russia aerospace force. Syria-Hezzbolah-Iran-Russia ground troops can be fast, strong, without mercy, and Russia can use kalibr missiles without any problem in this area,