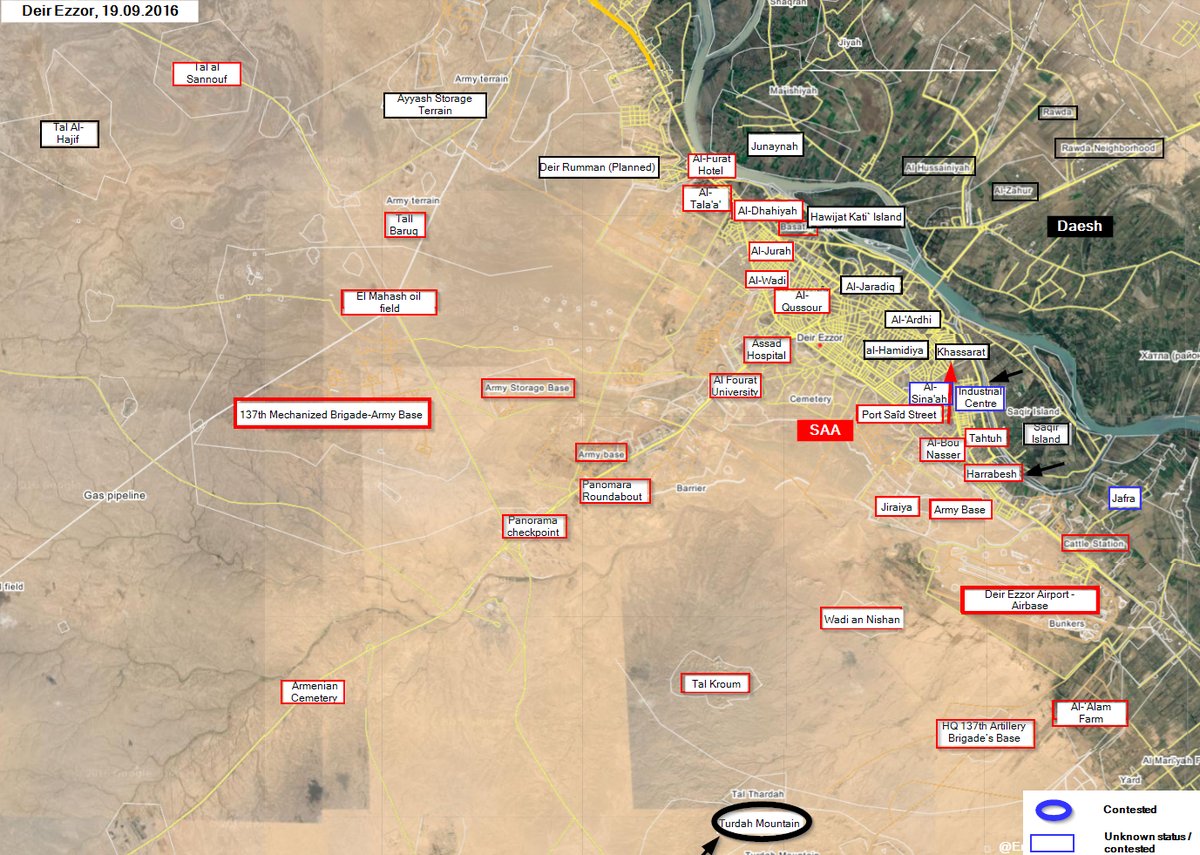 Today, the Syrian army has launched a full-scale advance on ISIS positions in the Al-Sinaa Neighborhood of the eastern city of Deir Ezzor.

According to pro-government forces, the Syrian army started the advance with detonating a few of tunnel bombs in Al-Sinaa and then developed initial success with capturing a number of building blocks, including crucial industrial structures, from the ISIS terrorist group. Now, clashes are ongoing in the area with significant chances that the pro-government forces will be able to take control of this strategic area.

3 ISIS vehicles have been reported destroyed and some 15 militants killed since the start of the Syrian army’s advance.

Last weekend, the Syrian army lost the Turdah mountain to ISIS terrorists after the US-led coalition had conducted air strikes against the pro-government forces in the area.

Wipe out the scum Israeli mercenaries.

Kerry has caved in to a joint initiative with Russia coordinating attacks on IS throughout Syria, this is great news IS have now lost their principal patron in theory and practice and George Sabra the Gorbachev die hard is spitting chips. I can’t see the SDF making it to Raqqah in fact that israeli initiative will soon be defunct, SAA in charge of Deir Ezzor with both US and Russian air support working as a team spells end for SDF.

I don’t think for a minute that Kerry is running the show. Russia, Syria should go it alone with those they can trust, the US/nato are just a hindrance.

It’s easy to see that now the truce has been sabotaged again by the bombing of the aid convoy, Sana is saying it may have been surface to surface Missiles we should know more soon, but we have to have a political settlement at some stage, war is by agreement that’s as good as it’s possible to get, who is the culprit styming the truce,certainly it was the Pentagon out reaching Kerry the first time, we have to know more about this aid convoy catastrophic event.

But there’s other reports that ISIS has advanced and gained strategic ground “ISIS advances within sight of only airport supplying 250K besieged civilians in DeirEzzor after US airstrike on SAA”.

No, I use Syrian sources twitter & news. And now the latest from Al Masdar News is that ISIS just captured more in the area: https://www.almasdarnews.com/article/battle-deir-ezzor-takes-turn-worse-isis-captures-jabal-thardeh/

you are right. after this report, the us airforce hiit saa positions and daesh attacked and gained ground. Deir Ezzor has been surrounded for about 2 years by daesh but has resisted due to the vital airport that is now in jeopardy thanks to my deplorable government.

One Syrian/Russian no fly zone, comin’ UP!