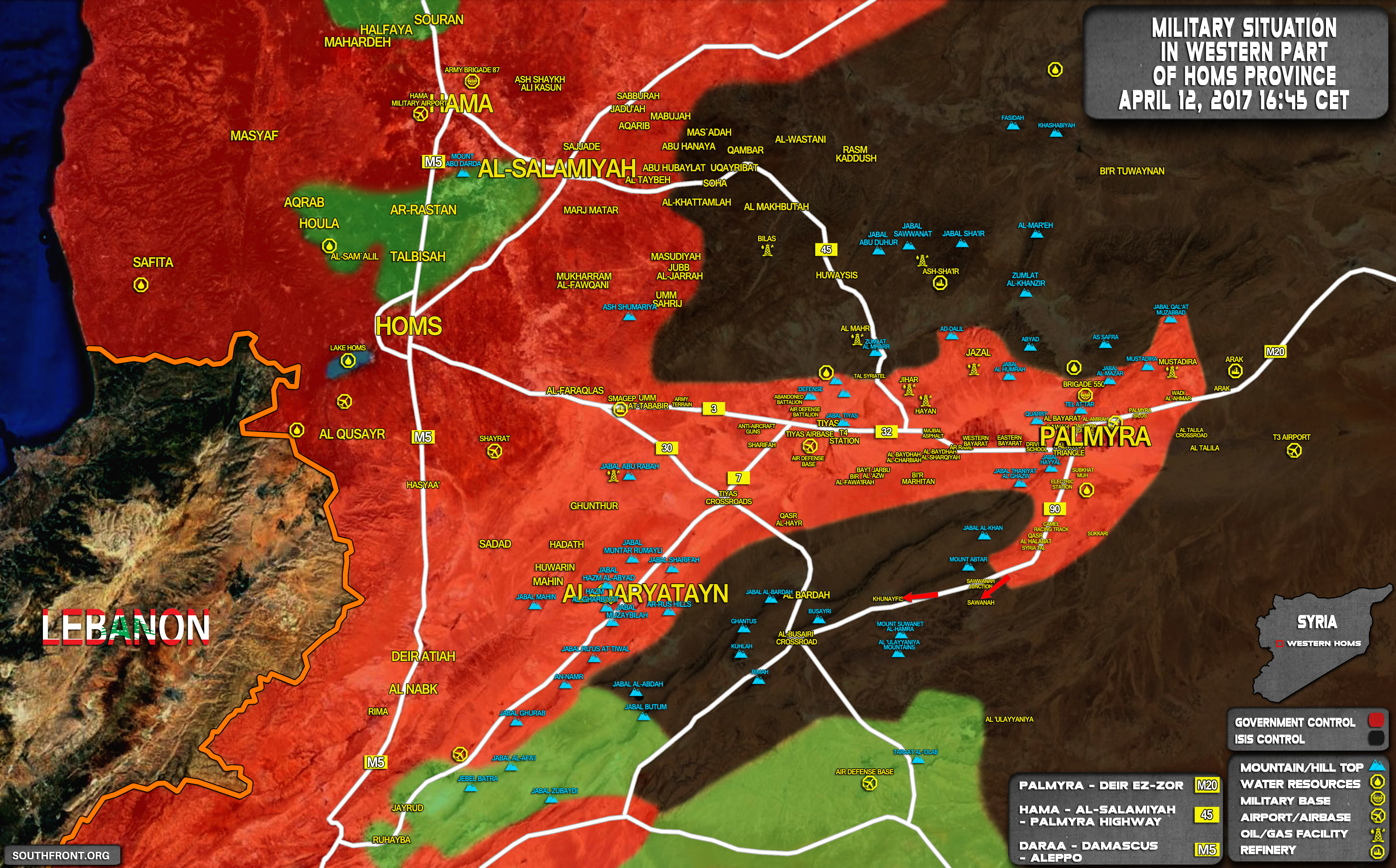 The Syrian Arab Army (SAA) and its allies have successfully captured many points from ISIS terrorists on the northeastern side of the Abtar Mountain and in the Al-Halabat area.

The SAA is aiming to reach the villages of Sawanah and Khunayfis, and the nearby phosphorus mine along the Palmyra-Al-Seen highway.

The SAA’s operation is led by the 5th Legion and the newly formed Homeland Shield Forces (HSF). The HSF is armed and trained by the Russian military as well as the 5th Legion.

Meanwhile, pro-ISIS sources claimed that ISIS terrorists had killed over 30 Syrian soldiers as a result of a successful ambush around the Camel track area south of Palmyra.

According to many pro-government sources, this operation south of Palmyra is extremely important. The SAA will likely try to capture the whole Palmyra-Al-Seen highway. The main goal is to prevent the US-backed Free Syrian Army (FSA) in the Syrian desert from advancing further in the Syrian desert.

The move came after the shift of the US policy in Syria. According to many sources, pro-government sources could face another attack if the FSA and Jaish al-Islam reach the government-held area near Palmyra.

Protection of al-Quryatayn and east Hama are small moves that will save the SAA a major headache in the future.

Very important to protect against ISIS and the NSA(New Syrian Army).

Why SAA dont move from south

Finally, the right decision! There will be enough time to move east and north of Palmyra, taking territories form ISIS now can be done with relative ease and without further implications, but taking territories from other proxies often comes with its diplomatic and military implications. That’s why that portion of ISIS territory south-west of Palmyra must be taken now as long as it’s still under ISIS control.

Although the circumstances may suggest otherwise, I also consider that taking Al Busayri crossroad, the nearby mountains included, in the near future it will be of strategic importance.

SF – Did SAA retake Abu Duhr mountain or not (along highway 45), there are conflicting maps, even on this site. Thank You.

Yup, speed is becoming an factor, due largely to the new actor in this theater, whom have shown its true face, the force that have taken the side of the invaders of Syria, and becoming their air force, the uISISa, run by an duch bag, but the force build up in the Arabian peninsula is mounting, and until summer I ges they will have full capacity, aka an 150 00 men in the region of Yemen.

Yup, I think they are skipping Syria and goes for Iran straight away, the rhetoric and the shadow playing, hiding wast force movements and gears, and lord knows whom is the Imperial Banana republics next victim of false flags, I suspect either Hezb or Iran, to alter the “focus”, and NK, is their back hand of things dont turn out as they want in Syria(Iran-Yemen, and Lebanon, remember the Litany River, and IDF have to wade thru Hezb homeland to have their Eretzh Israel, just ask the Trumps son in law, and this goes to Egypt, aka the Nile/Sinai.

Yup, like an stand of in the west, the next move will change everything, but I think uISISa have shown their cards and it look ridiculous. The second is that all the one understands the Russians about the mother land, but this front line begins Here, loose this and you will come under attack sooner or later, You know it, so dont pretend anything else because you cant trust Psychopaths, period. The only thing an Psychopath understand is two fold, an real kick in the face and followed by an new warning about that You know whom They are, and never again back out, because they are inherent cowards, and when wankers come home in body bags then peace will be an option, not an second before, even if millions of Koreans, south and north is wiped out, the wankers dont care, never have, never will until their own “heroes” comes home in body bags.

My hart goes to the Yemeni’s, whom is about to be hammered even more, than before, the uSISa is gone bonkers, dont expect anything else then fight for survival. And if they do that, take the glows of an hunt Royals, wipe every one out of existence, so that the Saudis can be freed, I bet they need just an friend, be that an crush the Saudis.

May the lord have mercy upon you all. Anyone whom isnt fighting for their land is an traitor, an man of no honor, and commits an grave capital sin, for not standing up for His own people, injustice and peace for anyone whom is their country men, with no exceptions what so ever, isnt an Muslim. Nor an Cristian or an Hebrew. You will pay for it, not now, because you dont believe, but this life is just an flicker of light, and the other side is time-less, only the worthy will pass, and the destruction of your own soul is so all encompassing this days is an horror to watch, and our Lord is crying, of what Humanity have become.

The fight against Darkness is whats coming, fueled by greed and ignorance/arrogance, the devils twins, works every time, dont it.

All in all, Syria is doing well, ramp up the defenses and make sure they have anuf, any initial war will start with massive swarms of missiles, and that one, is their suprice weapons, so take care and dig in. Yeah, interesting times indeed.

I’m surprised that people are thinking SAA won’t fight the FSA. Why not? They are also terrorists even if they have another name New Syrian Army.

yusss gotta stop the douchbags in the south from advancing further

I hope the SAA has an easy time retaking that entire region so they’ll have plenty of troops available to fend off any attempts by ISIS NW of Palmyra to break out towards Lebanon and Jordan.