Units of the Syrian Arab Army (SAA) Republican Guard recaptured the strategic position in Al-Faraj south of the Deir Ezzor airport after a successful operation this morning. Many ISIS fighters were killed during this operation, according to pro-government sources.

From its side, ISIS targeted SAA positions in the Al-Sina’a neighborhood in southern Deir Ezzor with guided missiles. However, no casualties were reported. ISIS also targeted civilians in Al-Jourah and Al-Qusur neighborhoods with armed drones. At least 24 civilians were killed or injured as a result these attacks.

According to AlMasdarNews, the SAA’s operations in Deir Ezzor are being supported by Syrian warplanes taking off from the Al-Shira’at airbase – that was hit by the US missile strike last week.

The Russian Aerospace Forces also participate in the operation. 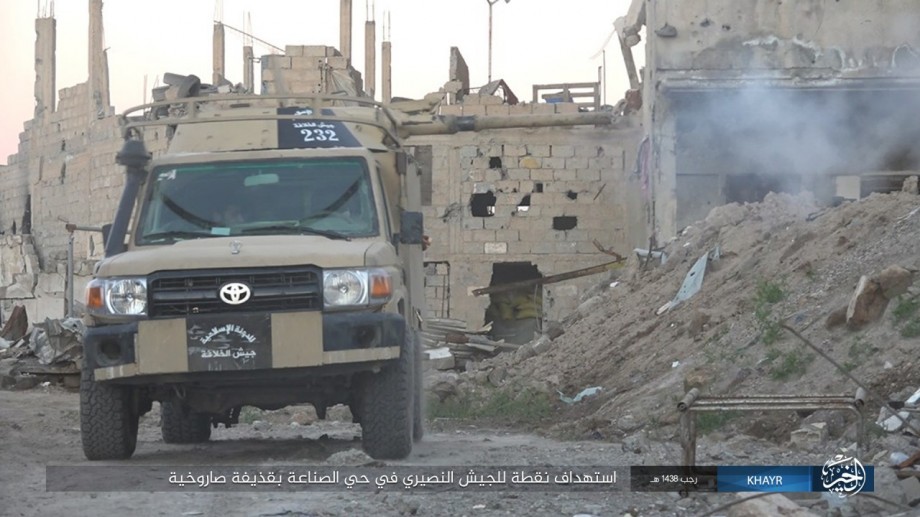 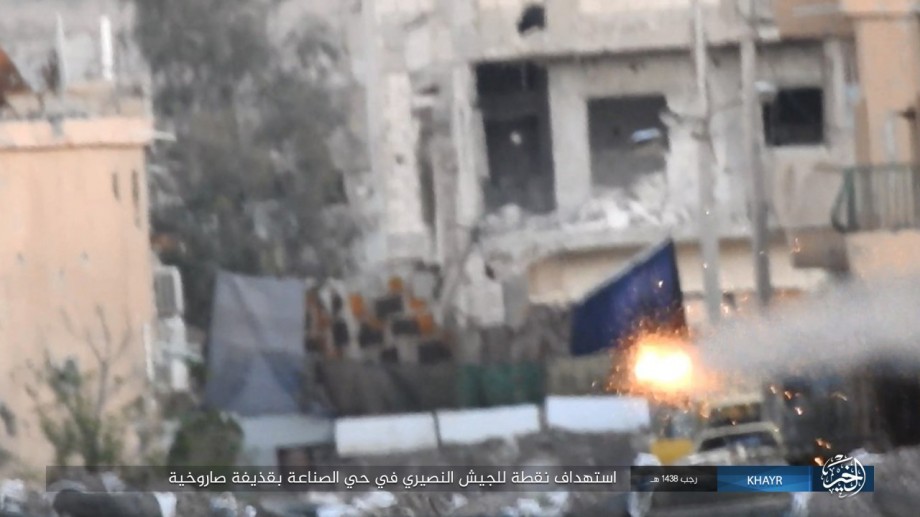 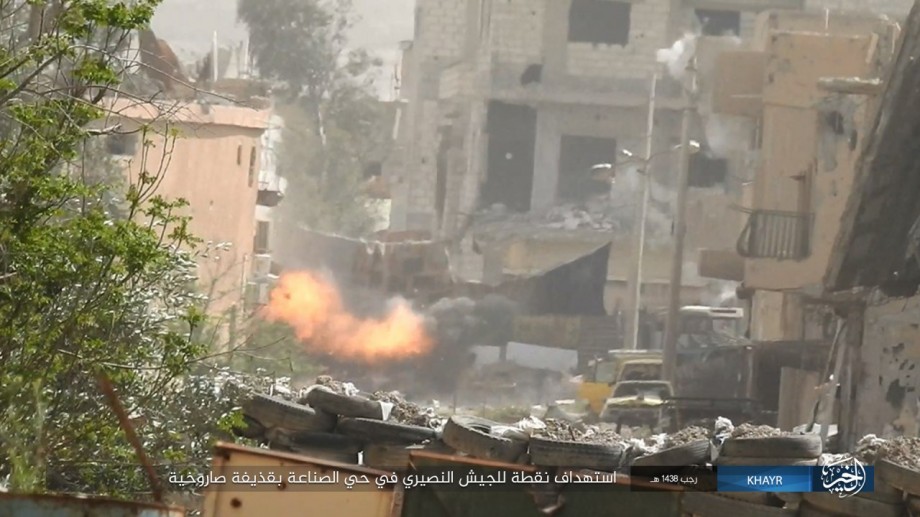 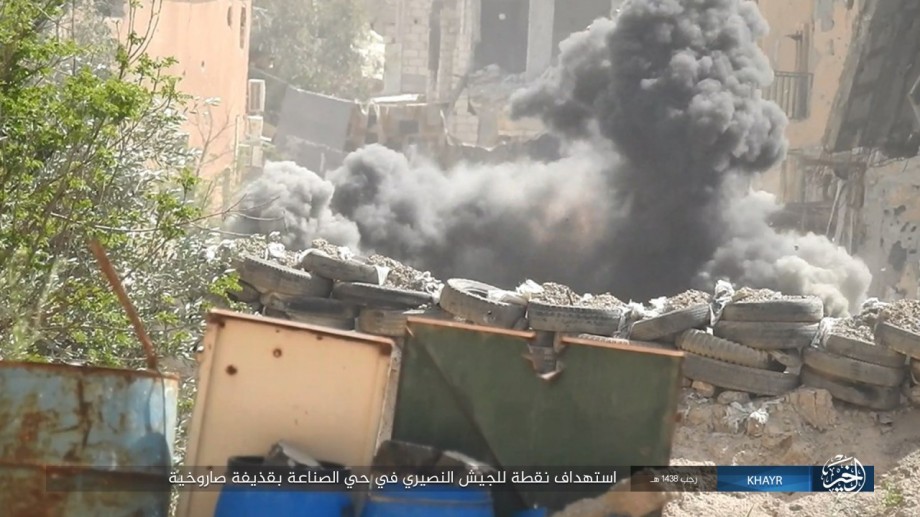 hahaha nice to hear that airbase is operational again!

These soldiers are probably the bravest fighters in this entire war. Surrounded for years, and still winning.

I wish Hollywood would make a factual heroic movie about the brave defenders, however I know that most directors in Hollywood are Jews, and they do not like Syrians. Perhaps Mel Gibson could make a film about the Syrian peoples resistance against world governments flooding their home lands with international terrorist from Jordan and Israel and Turkey and Saudi Arabia.

if i ever know someone who is in the business or get into hollywood myself, i will for sure put the idea out there

Some studios may be toying with that idea but may call it Palmyra since there still are remains of Ben Hur and Cleopatra sets out in the Mojave Desert.

You don’t know jack. The studios decide if a presented script has any box office possibilities then they find someone willing to produce it. The director just controls the actors and sets.

Daesh should be embarrassed over their inability to seize control of Deir Azzor.

It was reported that Daesh executed (or retired) at least 2 of their area commanders in the past. :)

Probably executed if they gave their leaders some backtalk when being chewed out for their failures.

Quite often there have been reports in here about huge advances by SAA against IS in DeZ.

As far as I can tell the lines have hardly moved in half a year or so.

The small SAA enclave is still cut in two, the airport is inoperable, the population is starving, losses in materiel cannot be replaced and there is no real effort of SAA to break the siege or maybe they consider it to be impossible, at least for the moment.

The SAA garrison may be brave but presently they are unable to break the siege by themselves.

They are sacrified by Assad for reasons of political expediency. The same goes for the civilians there.

Progress has been slow, but SAA is not losing this battle (ISUS is). SF reported that about 20 tons a day are air dropped to the Deir Ezzor area, and this amount may have been increased. No body is being sacrificed here. As far as heavy equipment, base 137 was also a storage area for the SAA. They probably even have small crude refineries for petrol, they do hold some oil wells.

whats weird is i dont get how just that one little town is still red on the map, surrounded by a sea of daesh-controlled territory. really remarkable how it hasnt fallen completely yet, and i hope soon the red there expands further

The story of SAA holding on to Deir Ezzor is one for the history books. :)

Only arabian book I think cause many western will too embrassed put this into their history, even vietnam many western still told story to their children they won that war even though black pajamas farmer kick them from vietnam

Not even in arabic books as statistics show that in all the arab states, less books are published than in just Spain.

As for the Vietnamese war, I do not know of any western country where they think the Us won that war.

Because ISIS is incapable of defeating a well trained modern army nor a determined defender. They do quite well against second rate troops that never experienced battle and poorly trained militias since they usually run away or surrender. ISIS also expanded their territory inside Syria by simply taking over empty ruined villages and towns that were abandoned by the rebels and the SAA.

So why hasn’t the SAA regiments there fully taken the city yet all these years if daesh can’t handle them?

20 tons a day is including military supplies I presume.

Even if were all food, then it would be 200 grammes of food per day per person (for 100.000 persons estimated). People starve on such a meager fare.

So I stand by my position, civilians are being sacrificed. As for military supplies, they tend to dwindle rapidly in heavy fighting. For all their bravery, SAA in Deir ez Zor is being degraded. I have nothing to make a guess about how long they can hold out, whether days, weeks, months or years, though the last is highly unlikely.

I understand that for propaganda purposes it is not popular to say this, but this here is not a propaganda site, is it?

I would assume that the inhabitants and soldiers have been growing gardens and raising small livestock (chickens, rabbits, goats, fish) to feed themselves. They might of been buying grains from ISIS and other foodstuffs from local farmers since ISIS needed to bring in revenue and the local farmers needed to make money to pay ISIS taxes. Assad had to buy oil and natural gas from ISIS and possibly grains too, to keep his population fed so might of been sending extra monies to Deir Azzor for buying agricultural products from ISIS.

In this war there is too much assuming. Were your scenario, the small plots, to be correct in a significant way, there would have been propaganda about the civilians defeating the siege by their home grown food.

Reports elsewhere in the last year tell about a slowly starving population where a few people get rich by war profiteering.

That Toyota truck in the photo looks rather nice. Maybe it’s a parade vehicle that was removed from Raqqa?