The Syrian Arab Army (SAA), Liwa al-Quds, the National Defense Forces (NDF) and other pro-government factions have launched a push in order to reach the strategic ISIS-held town of Sukhna located at the Palmyra-Deir Ezzor road.

According to pro-government sources, the SAA, the NDF and their allies have advanced northeast of the al-Hail field and captured some hills allowing to overlook the vicinity of Sukhna.

Sukhna is surrounded by a number of hills that overlook the town. If government forces capture these hills, they will be able to establish a fire control over the town. 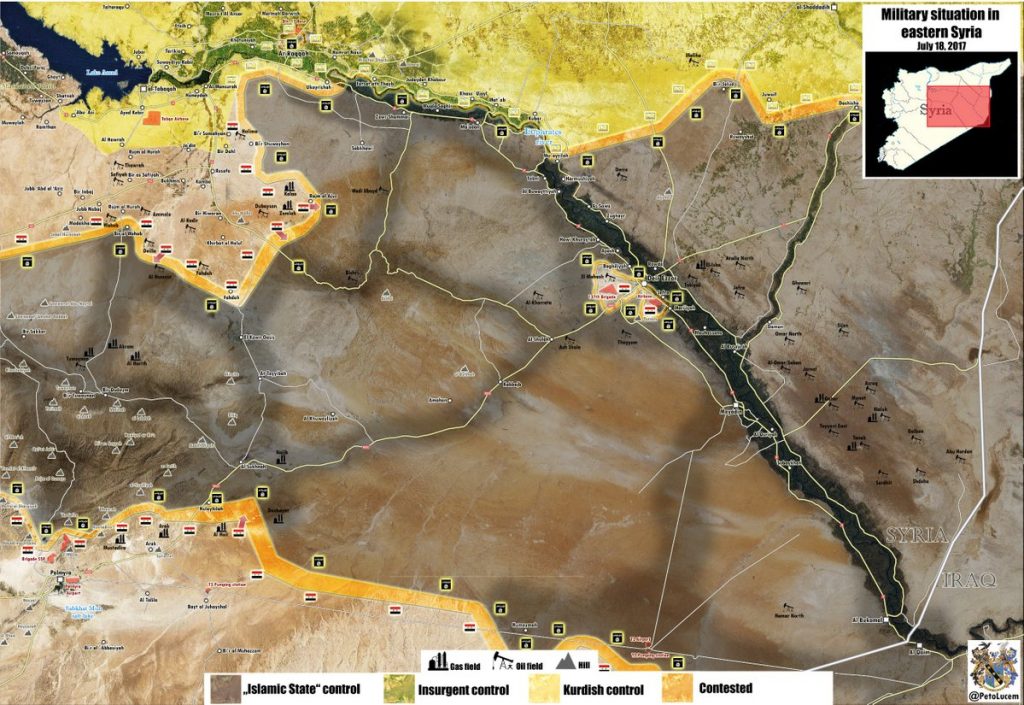 And then bypass the town and move on. Just besiege it.

why not retake it?

Time. Nobody else can take it, they can’t go anywhere and the population isn’t very friendly. Better hurry down to Deir Ez-Zor. Let them try to break the siege.

So what’s about Desert Hawks? i didn’t get it… Can someone explain me?

you are wrong. desert hawks is completely privat rganization, paid and armored by owner. they fere formed to protect oil stations. that means, they are better in desert. DH are directly under russian command, not assads.

here, in SF were good articles about DH.

They are part of the SAA now not so much funded by the Opposition member anymore why they were reformed under the government. ISIS hunters I believe are being sent to the hills , the 42nd brigade to Jobar region they haven’t lost in 6 years . Desert Hawks should go to T2 region and create another front to put pressure on ISIS there . They are under Syrian military command not so much Russian command anymore , why there was some confusion with them.

thats what ive been saying!! DH should go to T2, they could use the reinforcements especially after what happened the other day!

The map does not reflect those advances. In addition, SAA after establish the fire control over the city, the SAA should south-east and north-east of the city, before storming the city

Hallo Southfront!! Where are the news from Ain Tarma, Jobar and east Damascus?? Real battle happens there and on SF no words about it !!

Be patient and grateful or make a contribution :p

yea if u know whats happening there, contribute what u know to SF

Nothing happens there. It is one quiet neighborhood !!!!

So what is their to report? Lol

Create another boiler for ISIS cutting off supplies etc around Sukhana and ISIS territory to the west of it a while advancing on Deri Azur great strategy.

I believe the offensive will stall until the Syrian Army captures Taybah to the north of Sukhnah, afterwards they will converge on the stronghold from two directions and have opened a brand new supply route from Aleppo to Palmyra and have succeeded in making a significant sized Daesh pocket